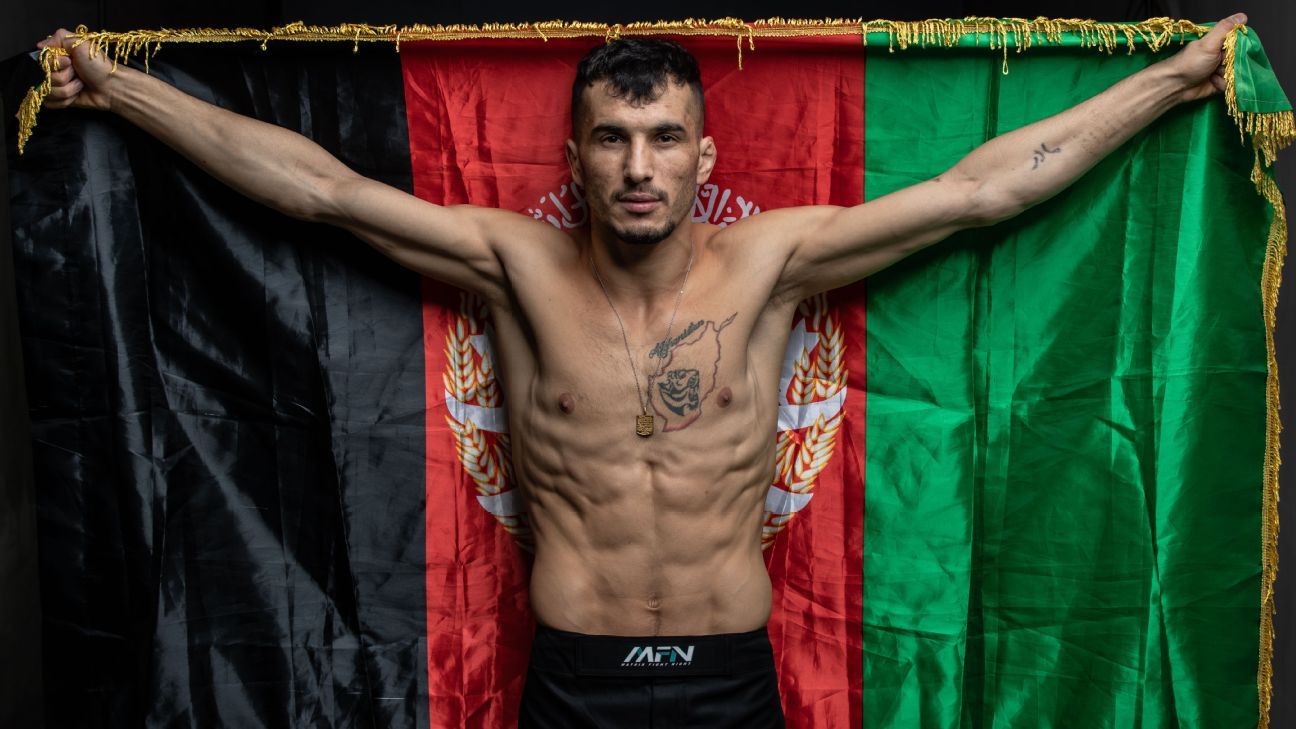 He may be the main card in the Matrix Fight Night (MFN) promotion of mixed martial arts to take place in Hyderabad on Friday night, but Afghan fighter Abdul Azim Badakshi struggled with another serious challenge in August this year.

The 26-year-old from Afghanistan had been in Mumbai for just over a month hoping to build his career in mixed martial arts. With an impressive 11-3 record, the lightweight fighter was scheduled to fight with the Matrix Fight Night promotion and was preparing hard for his first fight. However, there was worrying news from home. Afghanistan’s civil war was moving closer to the capital, Kabul, where his family lived. “I really wanted to go home again. But just as I was about to leave, I was advised to wait,” he says.

The proposal came from Krishna Shroff, sister of Bollywood actor Tiger Shroff and one of the masterminds behind the Matrix Fight Night campaign. “She said she should give it some time to see what happened and then think about what she should do. A week after I was to leave, the Taliban took over the country,” he says.

Badakshi stayed away from his family and could do little more than continue training in an MFN gym in Mumbai and pray. The takeover of the country hit Badakshi personally. His father previously ran a restaurant in the capital, which is now closed. The lack of work has forced two of his brothers to cross over to Iran. Still, Badakshi thinks he has been lucky. “I am grateful to Krishna for encouraging me to stay. If I were in Afghanistan, I would be in a lot of trouble. My career would definitely have been over,” he says.

As a sport, mixed martial arts grew rapidly in Afghanistan at the time of the fall of the previous government. Dozens of fighters competed at home and abroad. MMA gyms grew in the capital. The country even had an Afghan-born fighter – Javid Basharat – competing in the UFC. “We fought all over the world. I fought in Europe and Asia. We were able to make the country proud of MMA,” Badakshi said.

It’s all come to a standstill.

“MMA is not allowed in Afghanistan anymore. The gyms have been closed and of course there are no fights,” Badakshi said. The only chance for an Afghan fighter to compete now would be if they were out of the country when it fell to the Taliban. It is almost impossible for warriors to leave the country at all. “If you are a fighter from Afghanistan, your career is over. There was another fighter from Afghanistan who was supposed to compete with me in Hyderabad, but he could not get out. You will not get a visa now if you apply from “Afghanistan. Because I can apply from India, it’s easier for me,” Badakshi said.

While he says he often worries about his family in Kabul, they have asked him to stay away. “I’m constantly talking to my mom and dad. They’re safe now, but they’re not telling me to come back. I really wanted to go back to Afghanistan, but now I can only train and fight,” he says.

Fighting has been his calling for many years now. Born in the town of Kishum in the northeastern province of Badakshan, from which he got his name, he started his career in martial arts when he moved to Kabul and started learning the Chinese martial arts Sanda. When he was exposed to mixed martial arts, he also began training in wrestling and boxing. After a loss in his first professional fight, Badakshi became one of the toughest fighters in Asia in the flyweight division, where all of his eleven victories came as a stop.

However, his biggest challenges are outside the ring now. Although he is supported by MFN and stays close to his gym in Bandra, he says he often misses his family. “I miss my parents. They are in my mind. I talk to them often,” he says. He is still grateful to his countrymen in his gym for supporting him. “They never made me feel lonely. When they heard about the problems in Afghanistan, they went out of their way to support me. Because of all the help I have received, I really love India. It has given everything – training, “a place to live and a chance to compete. It’s like my second home now,” he says.

Meet yours #Main event challenger –
THE AFGHAN LION Replying to @Ali_Ali
The CV speaks for itself.

However, his first home remains Afghanistan, which is why he hopes to win his match against Brazil’s Marcello Guarilha on Friday. “This match is more important than anything else. Right now the Afghan people are in a lot of excitement. When I win, people will have a lot of luck. It is very important to win. I really want to win here,” he said.

Regardless of the outcome of the match, Badakshi is not making any long-term plans yet. Personal experience has made him realize the futility of this exercise. “There are people who say you do not want to go to the UFC or anything. I’m stopped making any long-term plans. You do not know if you want to be alive or dead the next day. You just have to do best with what option you have immediately, “he says.