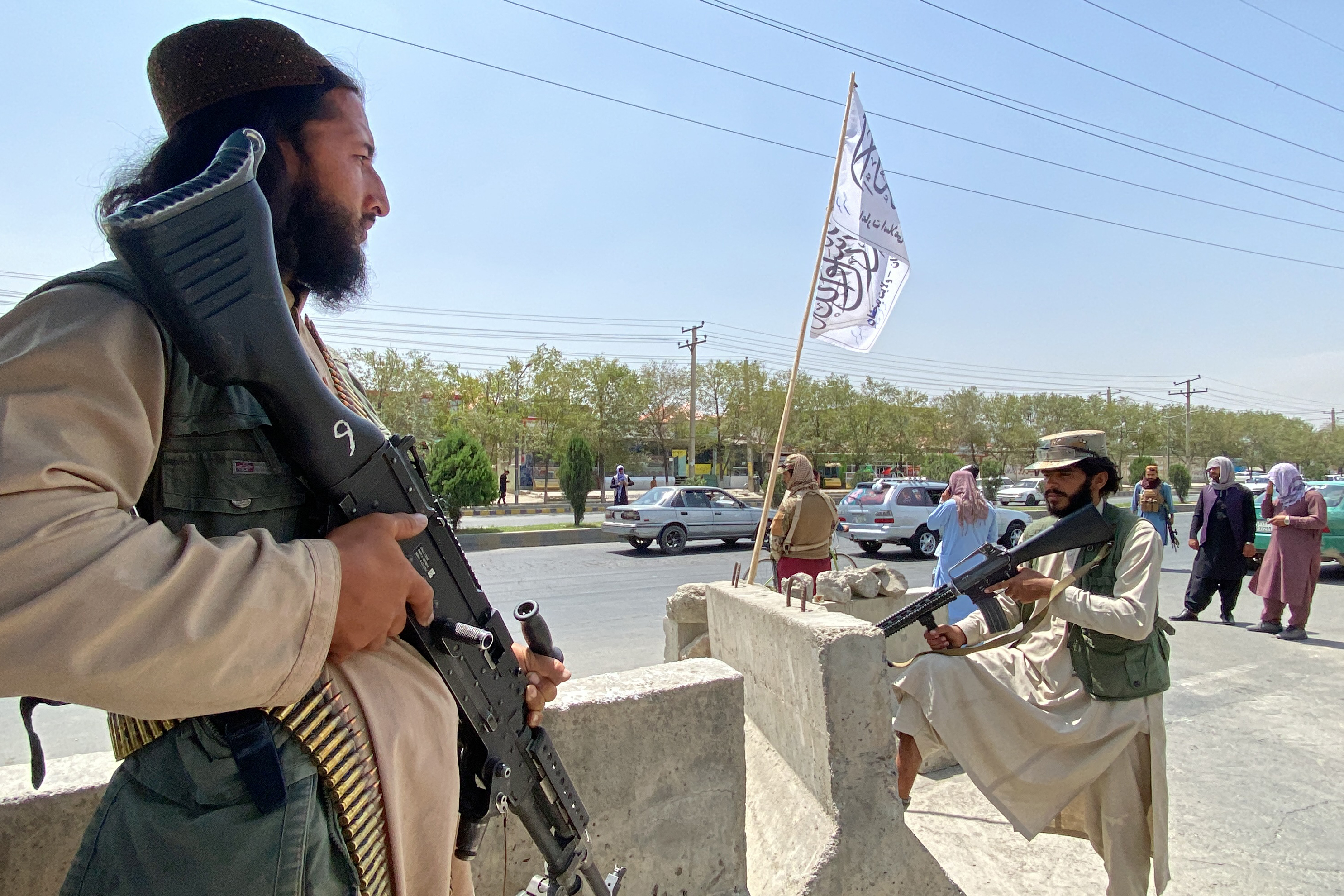 The militant group that ruled Afghanistan in the late 1990s under a narrow interpretation of Islamic sharia law regained control of the country two weeks before the United States had to withdraw its troops, which have been there since 2001.

During a news conference on August 17, Zabihullah Mujahid, the Taliban’s longtime spokesman, promised that the country would forgive those who had previously fought against them and would respect women’s rights during the new era of Taliban rule.

A statement issued on the official website of the Islamic Emirate of Afghanistan (IEA) on August 15 stated: “The Islamic Emirate reassures all its citizens that it will, as always, protect their lives, property and honor and create a peaceful and secure environment for his beloved nation. In this regard, no one should worry about their lives. “

Here we take a closer look at the history of the Taliban and its recent development.

Who is the Taliban?

The militant group was formed by Islamic guerrilla fighters known as the mujahideen, who opposed the Soviet occupation between the years 1979-89. Founded by Mullah Mohammad Omar, an Imam from Kandahar, in 1994, the group had the backing of the CIA and its Pakistani counterpart, the Inter-Services Intelligence Directorate (ISI).

The Afghan mujahideen were joined by younger Pashtun tribesmen who studied in Pakistani mattresses (or seminars). The Pashtuns are the predominant ethnic group in large parts of southern and eastern Afghanistan. They are also a large ethnic group in Pakistan’s north and west.

The Taliban found a foothold in southern Afghanistan and consolidated their strength in the region.

The Council on Foreign Relations explains that the group received support at the beginning of the post-Soviet era with the promise of establishing stability after the years of conflict from 1992 to 1996 among rival mujahideen groups.

The Taliban provided a refuge for al-Qaeda in the years leading up to the 9/11 attacks in the United States. The group formed a base where al-Qaeda “could freely recruit, train and deploy terrorists to other countries,” the US National Counterterrorism Center (NCTC) explains.

The Taliban retained control of Afghanistan until October 2001, when a US-led campaign against al-Qaeda expelled them from power.

What are the goals of the Taliban?

Talking to Newsweek, Dr. Thomas Barfield, author of Afghanistan: A Cultural and Political History, said: “They [the Taliban] wants to govern an Islamic State in Afghanistan using conservative rules, I do not believe that [they] has a definite goal beyond that. “

The author, who is also a professor of anthropology and director of the Institute for the Study of Muslim Societies and Civilizations at Boston University, told Newsweek “everyone looks to see” whether the new regime’s promises will prove to be true, but “they are different and take public positions very differently from the 1990s.”

“Practically, they can not govern without the cooperation of government employees and groups providing services (medical, humanitarian, etc.). Kabul, they ruled in the 1990s, was a ruined city without a functioning government or infrastructure with a few hundred thousand people. .

“Now it is a city of five million that expects a government to not only provide security but also provide services. The Taliban have no means to do this without reaching out to their former enemies,” Barfield explained.

Taliban regime in the late 1990s

By 1994, the Taliban had moved south and conquered several provinces after the fall of the Soviet-backed Afghan government in 1992. In September 1996, the group captured the Afghan capital, Kabul, assassinated the country’s president and established the Islamic Emirate of Afghanistan.

The Taliban’s first step after taking control in the late 1990s was to implement “a strict interpretation of the Koran’s instruction and jurisprudence”, which in practice involved “often ruthless policies of treatment of women, political opponents of all types and religious minorities. “, says NCTC.

According to a November 2001 report released by the Bureau of Democracy, Human Rights and Labor in the US State Department, the country under strict Taliban rule in the late 1990s had “one of the worst human rights registers in the world.”

The regime at the time “systematically oppressed all sections of the population and denied even the most basic individual rights,” and its “war on women was particularly horrific,” the state report said.

Another report compiled by Human Rights Watch (HRW) in June 2020 said that the repression at the time also entailed “cruel corporal punishment, including executions; and extreme repression of freedom of religion, expression and education.”

Strict restrictions were placed on Afghan women’s access to work, education and health care, as well as on their physical movements and attire, which required them to be covered by a burqa, a garment that covers body and face.

Women were only allowed to be out in public when accompanied by male relatives or at risk of being beaten by the Taliban.

“The Taliban carried out serious acts of violence against women, including rape, abduction and forced marriage. Some families resorted to sending their daughters to Pakistan or Iran to protect them,” the 2001 report said.

Promises of peace and protection under the new Taliban

The statement on August 15, published on the IEA’s website, claimed: “All those who have previously worked and helped the attackers or are now in the ranks of the corrupt administration in Kabul, the Islamic Emirate have opened the door for them and have announced amnesty for them. .We once again invite them all to come and serve the nation and the country.

“In areas under the control of the Islamic Emirate, people should live a normal life, especially in the official arena, whether it is educational, healthy, social or cultural,” the statement said.

The IEA stated on August 15: “No one should leave their territory and country. They must live a normal life; our nation and country need services, and Afghanistan is our common home that we will build and serve together.”

The Associated Press reported that women under the latest Taliban rule have been urged to return to work. A female newsreader interviewed a Taliban official in a TV studio on August 16. Elsewhere, girls were allowed to return to school and handed Islamic scarves at the door.

According to the AP, Taliban spokesman Mujahid promised at the press conference on August 17 that the Taliban would respect women’s rights within the norms of Islamic law, although he could not rule out cutting off hands as feet as punishment, just like the method used during the group’s first rule.

Mujahid stated on August 17 that the Taliban granted amnesty to former soldiers as well as to contractors and translators working for international forces. He said the Taliban would not seek retaliation against former soldiers and government officials, Reuters reported.

“No one will go to their doors to ask why they helped,” Mujahid said at the August 17 news briefing.

According to Reuters, he also claimed that day that “no one will hurt you, no one will knock on your doors,” noting that there was a “huge difference” between the Taliban now and what ruled 20 years ago.

The AP reported that the Taliban spokesman also said that private media should “remain independent” but that journalists “should not work against national values,” at the August 17 news briefing.

India’s NDTV reported that Mujahid said: “We have three proposals: No broadcast should be contrary to Islamic values, they should be impartial, no one should broadcast anything that goes against our national interests,” at the August 17 press conference.

Despite Mujahide’s assurances, fears remain in Kabul after prisons and weapons depots were emptied during rebel sweepings across the country.

The AP reported on August 18 that residents of the capital have claimed that gunmen have gone door-to-door in search of those working with the displaced government and security forces, but it was unknown whether the gunmen were Taliban or criminals posing as militants.

Mujahid claimed that the Taliban only entered the capital to restore law and order after the police presence had diminished, blaming the previous government for the collapse of security in the city.

An unnamed Taliban official told Reuters that the group’s leaders would also show themselves in public rather than live in secret, as they had done in the past.

They said, “Slowly, gradually, the world will see all our leaders, there will be no shadow of secrecy.”

In the wake of the Taliban’s latest advance, one of the group’s leaders and co-founders, Mullah Abdul Ghani Baradar, returned to the country after 20 years in exile.

U.S. National Security Adviser Jake Sullivan said both the United States and other countries are not expected to take the Taliban at its word when it comes to their promises to respect women’s rights.

Sullivan explained at the White House briefing: “As I have always said, this is not about trust. It is about verifying. And we will see what the Taliban end up doing in the coming days and weeks, and when I say we mean the whole international community. “

Will the Taliban invade other countries?

The IEA stated on August 15: “Again, we assure all our neighbors that we will not create any problems for them, they should thereby have confidence.”

This was reiterated by Taliban spokesman Mujahid, who told reporters: “We do not want any internal or external enemies.”

India’s NDTV reported that Mujahid said: “The Islamic Emirate promises to all world countries that there will be no threat to any country from Afghanistan.”

“We want to establish a government that includes all sides,” the Taliban spokesman said on August 17, adding that they wanted an end to the war.

Professor Barfield at Boston University does not believe that the Taliban will invade other countries.

He told Newsweek: “Even in the 1990s, the Taliban were only focused on Afghanistan.”

“Some of their foreign allies like al-Qaeda or the Islamic movement in Uzbekistan, however, the Pakistani Taliban are seeking to move beyond Afghanistan,” Barfield explained. 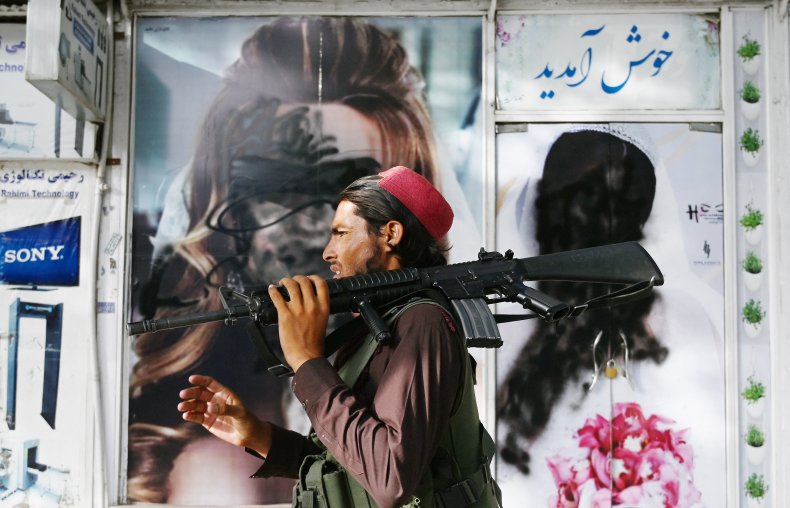 A Taliban fighter walks past a beauty salon with pictures of women who have been marred by spray-painting in Kabul, Afghanistan on August 18.