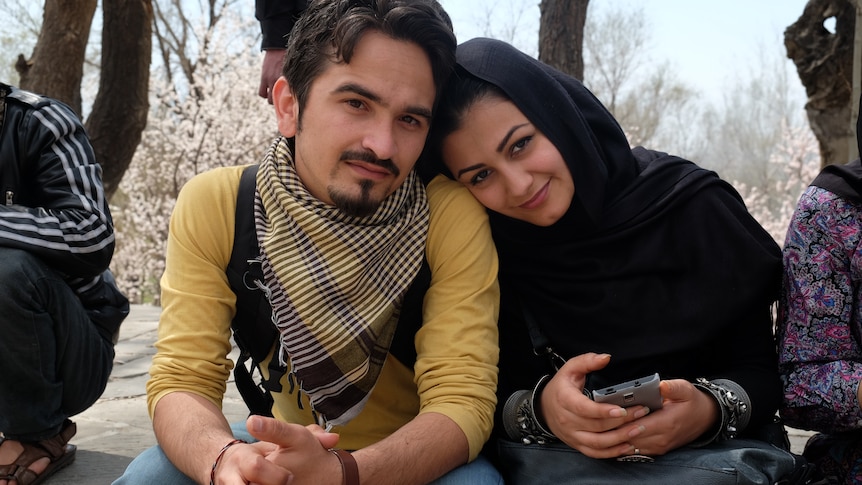 Ghezal Kiyanosh was a journalist in the Afghan city of Mazar-i-Sharif. When the Taliban arrived in August 2021, she knew she had to flee. What followed was two months of terror and insecurity as she and her young family desperately searched for a way out of Afghanistan. This is her story, as told to Claudia Taranto for Earshot

I know the Taliban are approaching Mazar-i-Sharif, but I distract myself by turning up the music, dancing and ironing my new dresses.

Listen to the podcast

Earshot is about people, places, stories and ideas in all their diversity.

My father works for the provincial government. One day he calls and says, “We have been sold out by our government. Ghezal, run away.”

Together with my husband Shiwa and our two small children, I run through the deserted streets to a relative’s house.

The next day I return home to collect a few things and see a man in a Taliban turban and robes talking to a neighbor and pointing to my house.

I know for a fact that the Taliban are after me. A local pharmacist tells me that two government employees have already been shot and killed in our street.

After a few days, our relatives ask us to leave. They are concerned that we are making them a target for the Taliban. So we pay a lot of money and take a plane to Kabul to join our friends, Baktash and Seena, who are civil society activists.

Our city is falling

We think we have about three months before the Taliban arrive in Kabul, enough time to escape the country.

But the following night we get the news that our city, Mazar-i-Sharif, has fallen. I cry as my friends post pictures of the white flag of the Taliban flying over the city skyline.

That flag is not my flag.

Then I take a call from a very trusted source who says President Ashraf Ghani has jumped across the country.

We are all in shock when the neighbors come rushing in and ask Baktash and Seena to burn their documents and hide their laptops and hard drives. They also tell them to clear all the pictures of their daughters off the walls – the Taliban do not allow pictures of women to appear.

That night, I believe that Kabul will be overwhelmed by fighting and that we will all die. I do not want my children to experience that terror just before they die, so I put them to bed hoping the bombing happens while they sleep.

Then we turn up the music and play patriotic songs. We sing, we cry, we shout. We are out of our mind.

We wake up the next morning when a neighbor knocks on the door. The Taliban go door-to-door and search houses, we can see them from our window. We’re panicking.

Baktash and Shiwa change into white Muslim-style robes, and we discuss whether to hide in the kitchen cupboards or flee to the streets. Then a relative from abroad calls and urges me to take my documents and go to the airport.

A nightmare at the airport

The next day, we join thousands of desperate people at the airport gate. I hear an American soldier say, “Fuck you, fuck you.” I’m shocked to hear him speak so rudely to the crowd.

Then I hear shots behind me. Five or six soldiers shoot in the air. My son shouts and says a bullet has hit his finger and back. I’m very scared when I examine him and realize he had been burned by a bullet box. I shout at the soldiers to stop firing. In that moment, I feel crushed.

Then all of a sudden everything is red and people are rushing and pushing us. I fall over, I can not breathe. Our eyes burn with the tear gas. I feel guilty about bringing my children here. They will have nightmares about the airport for weeks afterwards. A young boy gives us some water to wash our eyes.

We go away, defeated. We have nowhere to stay.

That night we throng into a safehouse where my mother, a human rights worker, is hiding.

The next day, I’m able to convince a man who runs a safehouse for journalists to take us in. It is a four-storey building with a network of rooms, where a family lives in each. I spend the next six weeks working until late at night: filling out forms, scanning documents, trying to get us visas to a western country.

During the day, children play noisily in the hallways, and the other journalists’ wives have fun, gossip and dance. Their men apply for visas for them so they are carefree. They encourage me to join them, but I can not, I’m too stressed.

As the weeks go by without success, I become extremely anxious and have many migraines.

Peeking behind the curtain, I can see that the streets of Kabul are gradually returning to normal. Shops and schools open, cars reappear on the streets. But there are no women.

One day I see two girls standing on their roof, completely covered in black, and who can no longer be with their brothers and play outside.

It breaks my heart as I realize that when change happens in Afghanistan, it always affects women first.

The situation is serious. I follow the news of journalists being hit by the Taliban and women protesters being shut down. I live in fear that the safehouse will be raided at any time. I am considering traveling overland to the Pakistani border and taking my chances in Pakistan as a refugee, but the risks and price are too high.

An escape, but at what cost?

A German human rights worker I knew in Mazar-i-Sharif texts. He’s surprised to hear that I’m still in Afghanistan and he offers to help.

We have put together a small network of friends from the UK, North America and Europe at Signal and they are helping to promote my visa application to Germany, sponsored by PEN International.

A few weeks later we find out that we have been granted a visa to Germany. Although I feel elated at that moment, I also feel hopeless.

When you are a refugee, you are just a human being without a homeland. You have to leave everything.

While I’m grateful for the kindness so many people have shown us, it also hurts to be so helpless. But I have to do this for my kids who deserve a better life, so as not to see their parents being shot or seeing people being hung on the street.

The next day I nervously cover myself completely in a burka so no one recognizes me and goes to the bazaar to buy some luggage and toiletries for the trip. Later, the night before I leave the safehouse, I join the other women and we dance.

On my last day in my country, I return to the bazaar to eat Afghan street food for the last time with my brother. I have to fight back the tears. It hurts so much to say goodbye to him.

I spend my last night in Afghanistan back in my mother’s safehouse with my parents and siblings.

Being a woman who does not follow the rules of society, who chooses her own path, has forced me to be tough, to shut off my emotions. I have such a hard time hugging my family, being soft and loving with them. I do not want to show them how much I’ll miss them, so I’m pretending to be happy.

The next day we fly to Pakistan, where we are treated by the German embassy. I’m shocked to see how free the young people are, wearing jeans, couples holding hands in the street. The Pakistani government trained and supported the Taliban, and yet their people live a peaceful life.

And while I finally feel free in Pakistan – eating KFC and Pizza Hut, taking the kids to the park – I also feel guilty about the family I left behind in Afghanistan who fought for food.

Weeks later we are on a plane flying to Hanover and our new life.

Ghezal’s parents and some of her siblings received visas to Albania, others have stayed in Afghanistan. She is planning to write a memoir and is learning to speak German.