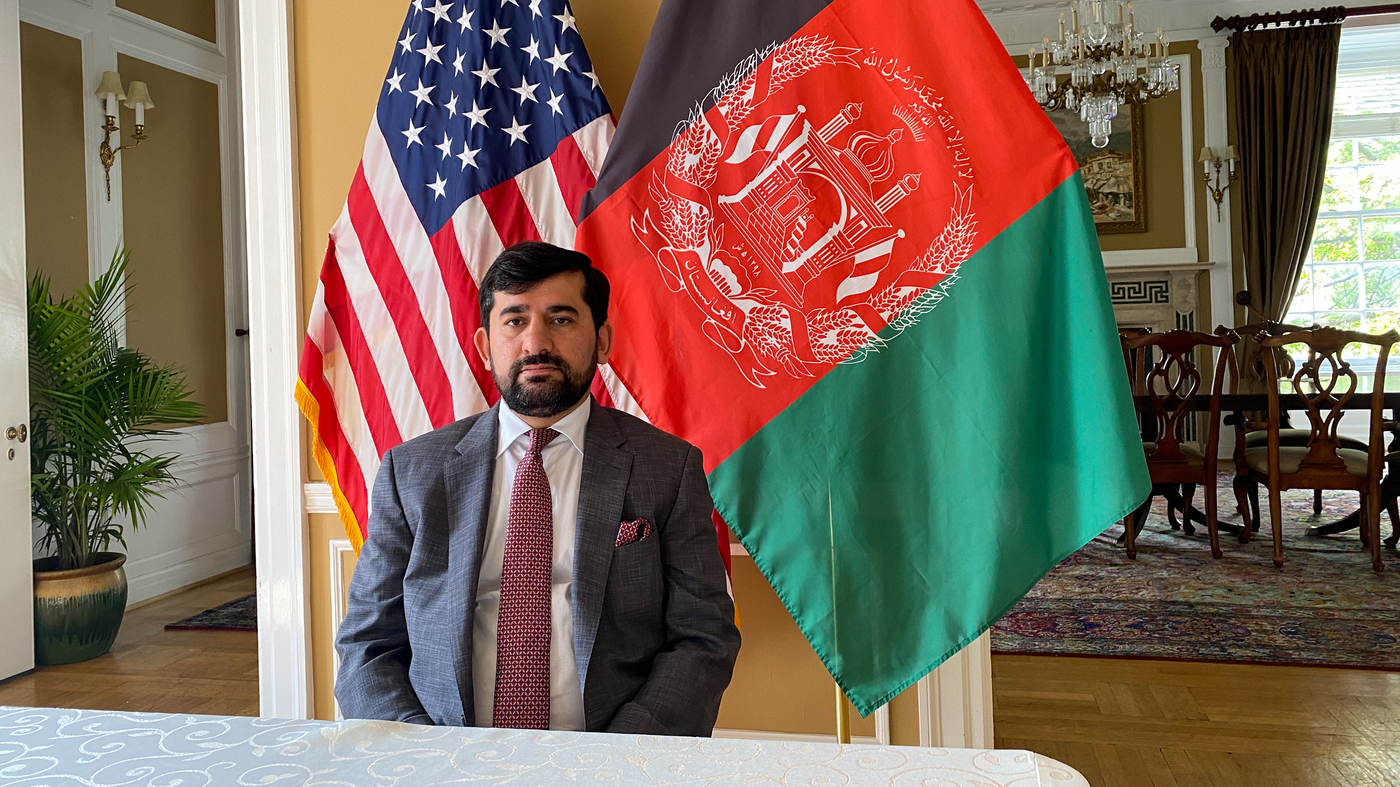 (SOUND OF THE DOOR CLOCK)

LAURA SULLIVAN, BYLINE: For more than 70 years, the Embassy of Afghanistan with its stately Georgian bricks and stones has been holding down on the corner plot in a neighborhood of large embassies.

The inside is just as striking. An employee leads the way through a maze of stairs and hallways, all adorned with Afghanistan’s red carpet. There are high ceilings, hallways long and down every single empty offices, empty desks, empty break rooms until you reach an office on the top floor.

ABDUL HADI NEJRABI: How are you?

SULLIVAN: Abdul Hadi Nejrabi is the Deputy Ambassador. He is the highest ranking person here. There was to be a new ambassador this summer, but then Kabul fell.

NEJRABI: We continue to operate here at the embassy. We have to keep going. We have no other options.

SULLIVAN: Nejrabi is sitting in his office overlooking a large garden. He has a shelf full of binders for Afghan election results and another about Afghan opinion polls – two things that hardly matter anymore.

NEJRABI: We choose to serve the people. That’s why we’re here. We can not close the door to the embassy.

SULLIVAN: They have not closed the door, but Nejrabi says he has let most of the staff go. He can not afford to pay them. The Afghan republic, the government before the Taliban, used to fund the embassy in quarterly installments. Now that money is almost gone. Nejrabi and 11 other diplomats show up every day and work for free to help people flee and help them and refugees get critical documents. Nejrabi says they can keep the lights on for a few more months, but eventually even he and the rest of the staff have to find a way to pay their own rent and electricity bills.

Can you go home?

NEJRABI: Absolutely not. Currently, they are capturing our house in Kabul.

NEJRABI: Yes, they conquered our family home, built by my father 35 years ago.

SULLIVAN: Nejrabi says his family is in hiding, afraid they will be executed. Every week he talks on the phone with his former colleagues in the Ministry of Foreign Affairs. They also live in fear.

Have you heard from the Taliban? Has anyone called you on the phone?

NEJRABI: They tried, Taliban. They tried and they arranged a Zoom meeting.

SULLIVAN: Nejrabi says a few weeks ago that the Taliban’s acting foreign minister sent all the ambassadors a Zoom link.

NEJRABI: All our embassies, they denied it and no one participated in that Zoom call.

SULLIVAN: A small smile crosses Nejrabi’s face. He explains that the Taliban’s foreign minister came on Zoom, but all the ambassadors confirmed with each other afterwards that not a single one of them showed up.

NEJRABI: We refused because we do not recognize them. We do not represent them and they are a terrorist group.

SULLIVAN: This embassy and most of the others are in the same limbo. They are too far away for the Taliban to reach, and yet they cannot survive on their own. Embassies need countries, countries with governments, that their host countries recognize. You can see this unfolding down a long corridor outside Nejrabi’s office, where a dozen portraits of former ambassadors stand along the walls.

NEJRABI: So you can see it from there. From the first time we opened the embassy …

SULLIVAN: And further down the hall. Every fifth inch is another portrait.

NEJRABI: The gap was here. You see?

SULLIVAN: The portraits suddenly jump from 1981 to 2002. The gap is only five inches of beige wall, but it represents 20 years of civil war and brutal totalitarian rule.

NEJRABI: The next ambassador was in 2002, you know, after the Taliban’s removal from power.

SULLIVAN: During the 20 years this building was closed and closed. State Department officials say the United States is keeping embassies in trust until new governments are recognized. Just down the road, the Iranian embassy has been frozen in such a state for more than 40 years now. As we walk down the dark corridors, Nejrabi says that every day he worries more that the United States will eventually recognize the Taliban. The pressure is growing as the country’s economy collapses and ISIS-K and al-Qaeda threaten its stability.

Can we see this room?

On the first floor, the stately reception hall is still anchored by the tri-colored flag of the Republic. Nejrabi says he can not imagine the Taliban here.

NEJRABI: This room, it’s a symbol of Afghanistan. When I come here every day, it brings hope to me that we have a country, you know, we have a tri-colored flag. And one day we will liberate our country back and we will take it from the Taliban.

SULLIVAN: The venue is still ready for the party – tablecloths, candlesticks and gold chiavari chairs, all waiting for guests who are no longer coming. Nejrabi says he and the other diplomats will stay as long as they possibly can. Then they will turn off the light and hope that it will not be another 20 years before someone turns them on again.

Copyright © 2021 NPR. All rights reserved. Visit our Terms of Use and Permissions website at www.npr.org for more information.

NPR transcripts are created on an urgent deadline by Verb8tm, Inc., an NPR contractor, and produced using a proprietary transcription process developed with NPR. This text may not be in its final form and may be updated or revised in the future. Accuracy and availability may vary. The authoritative registration of NPR’s programming is the audio recording.