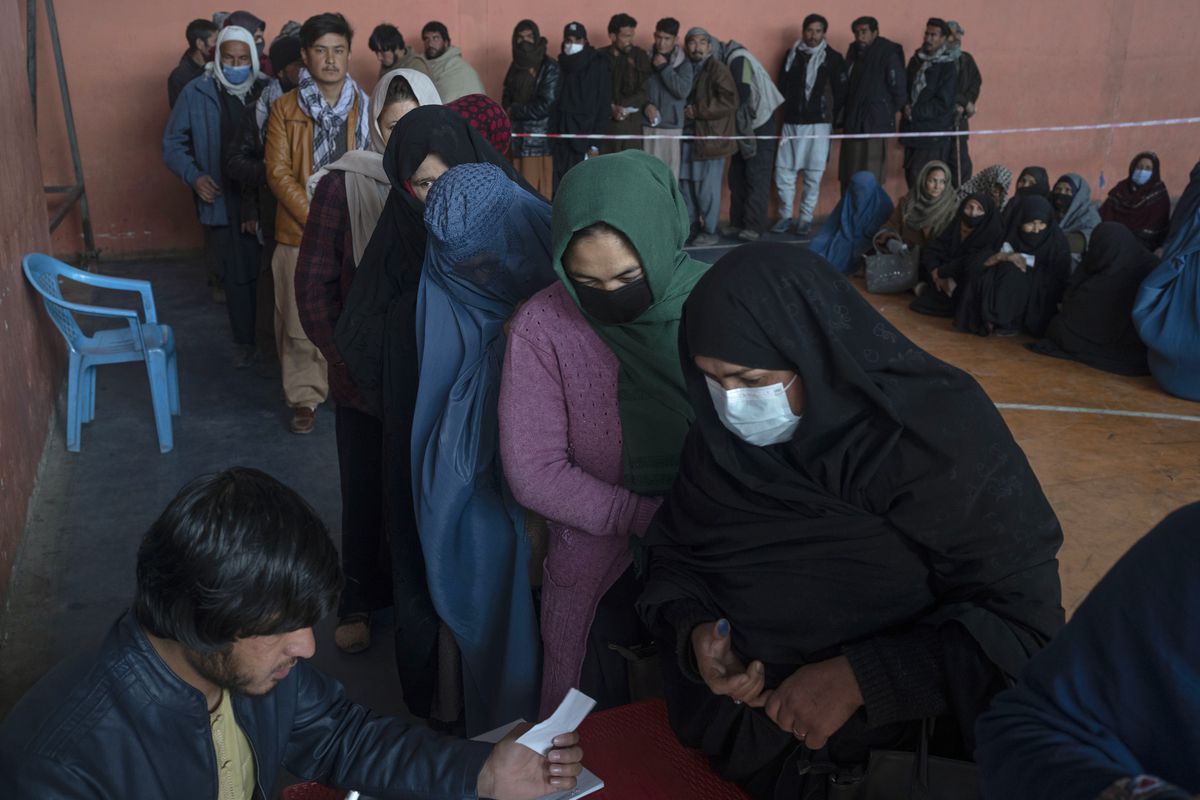 In the 100 days that have passed since the Taliban took control of Afghanistan, international aid workers have been running to feed a starving population.

These humanitarian workers made a critical decision to stay in the country after the United States and its allies withdrew their military – and much of their diplomatic missions – from the country in August.

They are working to protect gains from the past 20 years – especially by pressuring the Taliban to get Afghan women to continue working with them. All the while being among a small international presence in a money-poor country.

Sogol Akef, World Food Programs chief engineer in Afghanistan, is from Toronto and has worked in and out of the country for 17 years. Ms. Akef is responsible for overseeing WFP’s infrastructure, such as offices, accommodation, department stores and a medical facility. She said that as relief workers, they can not interrupt their work for anything.

“If we all run away at the first kind of insecurity or problem, it’s just not what the humanitarian person does. You come back, you stay, you deliver,” she said in a telephone interview from Kabul.

UN agencies said in a recent report that more than half of Afghanistan’s population – 22.8 million people – will face extreme hunger in the winter months as the country plunges into a worsening crisis. A collapsing economy, drought and continued fighting have severely affected access to food. The Taliban’s takeover has had a significant impact on the economy. Officials have not been paid for months, the report said.

The Taliban’s control has also meant a freeze of $ 9.5 billion in government assets, causing the economy to deteriorate further as well as the value of the currency. Foreign aid had accounted for 40 percent of Afghanistan’s GDP, and its future is uncertain, but some countries continue to provide support through UN agencies and international organizations.

Development aid from the EU to Afghanistan is still frozen. EU foreign ministers set five benchmarks stating that aid would not continue until it was met. Of particular concern, the EU said in a press release in September, are the rights of women and girls. However, the EU still provides funding through international organizations.

Ms. Akef said people have sold their belongings, including furniture and clothes, to put food on the table. Sometimes parents do not eat so their children can.

“I have some Afghan friends or people that I used to work with, and sometimes I see their children, and the children say to me, ‘My father … the light in his eyes is now gone.’ When a six-year-old child tells you about their father, it’s heartbreaking. ”

Mrs Akef said she was on leave when Kabul fell to the Taliban, but that it was important for her to return to Afghanistan. “I’m Canadian. But I come from an immigrant family, my parents are from Iran… so some of these things are very personal,” she said.

While chaos unfolded at Kabul airport in August, where desperate Afghans tried to flee, Mary-Ellen McGroarty, country director of the World Food Programs, was seated.

“I think I’m still amazed at how fast it all happened compared to how everything changed completely,” she said. It was awful, she said, sending local staff home without knowing when she would see them again or what would happen in the following days.

Ms. McGroarty said everyone is now adjusting to a new reality. Quietly, in the background, she said, there are discussions and negotiations with the Taliban, which she described as not a homogeneous group, but different from province to province.

She said that what she has told them is that there is a high proportion of female-led households in Afghanistan because they are widows and that “if we are to serve them in a dignified and proper manner, then I have need female staff to be able to talk to them, because that is in line with their culture. ”

She said WFP’s local female staff are now back at work across the country and that the agency has received cooperation from the Taliban to work independently.

Guillaume Mongeau-Martin is the Medical Activity Manager of Médecins Sans Frontières (MSF) pediatrics in Herat. He is originally from Montreal and has been in the Afghan city for a month.

Dr. Mongeau-Martin monitors the medical activities of MSF’s malnutrition program, which consists of an inpatient therapeutic nutrition center at Herat’s regional hospital. Soon, he said, they will open a pediatric emergency room and intensive care unit.

He said some patients come from the city of Herat but many are from local communities some distance away and it takes a while for them to reach the hospital. This means that they often arrive with advanced medical conditions resulting from malnutrition that are difficult to stabilize.

“One never quite gets used to seeing very skinny and fragile children,” he said, adding that mortality is quite high in cases of severe malnutrition. “It’s a daily thing we have to face.”

Back in Kabul, Magda Rossmann, Save the Children’s program development and quality director, said her organization provides support for education, treatment for malnutrition, child protection programs and psychosocial support. It recently began supporting families with cash to help them buy fuel or warm clothing ahead of the winter. It also started handing out blankets.

Mrs Rossmann said that in order to resume these programs, it was necessary to do so with local female staff. “We knew that without female teachers, female doctors, female nurses, social workers, we would not be able to reach out to women and girls facing a disproportionate impact.”

She had left Afghanistan as part of a regular rest plan and returned a few weeks ago.

“It is important that there is pressure and a call for action by the international humanitarian community to provide and release both humanitarian aid and some of the long-term aid, because we are really concerned about the situation now and especially the crisis regarding hunger. and the coming winter. “