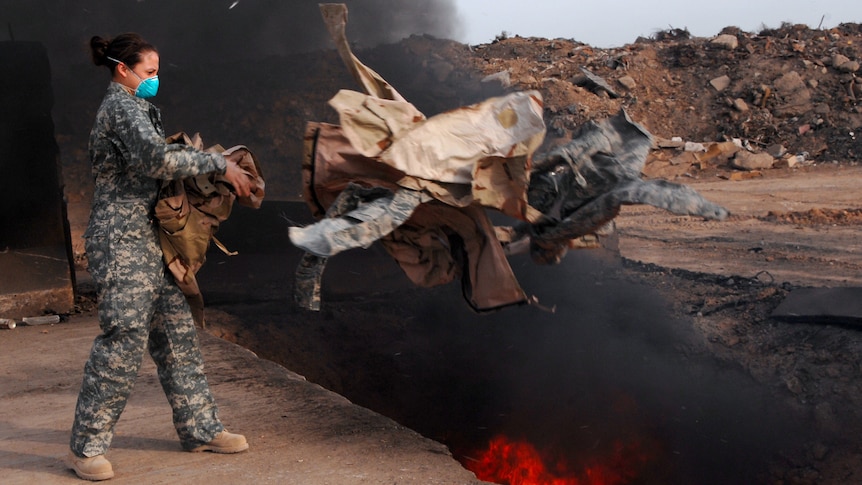 Julie Tomáška knew it could not be good for her to live in the shadow of a burning landfill the size of a football field.

How could she not?

“Wherever we were, no matter how the wind changed, we smelled and breathed in a way the smoke and soot from these wood holes … 24 hours a day,” she said.

The loophole was the inevitable backdrop to life at the Balad Air Base in Iraq for Staff Sergeant Tomáška and her colleagues from the Minnesota Air National Guard during her two missions in 2005 and 2007.

The pits were used by the U.S. military across Iraq and Afghanistan to dispose of virtually anything – canteen porcelain plates, electronics, chemicals, classified materials, smuggled goods and even bombed-out vehicles.

When the flames went out, jet fuel was used as an accelerator.

“It permeates everything and there is a layer of soot on everything,” said Julie Tomáška.

“You just can not escape the smell.”

At the time, Sergeant Tomáška and her colleagues who had been deployed in support of Operation Iraqi Freedom were joking.

“You have a morbid sense of humor in such a situation,” the now 42-year-old said.

“We stepped back a bit and said, ‘Well, this is really coming back to bite us.'”

The lungs are left ‘scarred’ and ‘stiff’

Years after she returned home to Minnesota, the prophecy came true when Julie Tomáška was diagnosed with insertion-related lung disease.

Specifically, she has been told she has a number of conditions, including constrictive bronchiolitis, chronic pleurisy and pleural fibrosis.

“It basically means my lungs, the airways, are scars. The small airways are very scarred and stiff, so I can’t get a full breath,” she said.

“I have had to learn to just live life very slowly and somehow take things at a slower pace and realize that if I exaggerate one day, I will pay for it for three.”

Julie Tomáška was able to navigate what she says is a complex system for getting some health benefits from the U.S. Department of Veterans Affairs.

Thousands of others who suspect diseases ranging from respiratory diseases to cancer associated with their broadcasts in the 9/11 wars as well as the first Iraq war are still undergoing the diagnosis process.

“I can see why a lot of veterans just stop. You know, they stopped pushing it because it’s overwhelming,” she said.

“It takes an insurmountable amount of time. I’ve gone through each test three times, practically.”

The Department of Veterans Affairs set up a register of burns in 2014 to help “better understand the potential health effects of burns and other exposures”.

To date, more than 200,000 people have registered, but the majority of combustion-related benefit claims submitted so far have been rejected.

The department recently announced that all veterinarians in Iraq and Afghanistan who are exposed to burning pits and subsequently diagnosed with one of three respiratory diseases – asthma, sinusitis or rhinitis – will automatically receive disability benefits.

But proponents say many more diseases should be added to that list.

“For them to continue giving small loaves of bread like this is almost an insult,” said Mrs Tomáška, who has now withdrawn from the military.

The department says it is actively studying the effects of airborne hazards such as burns and other military environmental exposure, but advocates want action now.

Their campaign has the support of comedian Jon Stewart, who has previously spearheaded an emotional health care campaign for 9/11 first responders exposed to carcinogenic toxins in the ruins of the World Trade Center.

Now he is lobbying in Congress on the burn pits issue.

“If you can not take care of the people who protect the country and take care of you … I think the phrase would be ‘yikes,'” Stewart said at a recent news conference.

“There is no country that talks about a better game for its veterans, but we are failing them in this situation.”

Firewall stench was ‘out of control’

Julie Tomáška continues to campaign with the organization Burn Pits 360 and the Amie Muller Foundation, partly because of her own health problems, but also because she keeps a promise to a friend.

Her close colleague Amie Muller, who was on the same broadcasts in Iraq, died of pancreatic cancer in 2017 at the age of 36.

Amie Muller left behind a husband, two small children and a teenage daughter.

“When you hear the two words, ‘pancreatic cancer,’ most people know it’s a kind of death sentence,” her husband Brian said.

“She did all the things she had to do: all the chemo, the cocktail, three different chemo cures together.

“She did not even think twice and she tried to fight for our children, for our family. But nine months later she was gone.”

In an eerie post in a diary she led to her young daughter, Amie Muller wrote about her worries about working and sleeping next to the firewood holes.

“They are constantly burning plastic, rubber, you name it, and the stench is OUT OF CONTROL.

“I swear if I get any kind of lung disease, this is where it came from.”

Amie Muller’s cancer was never officially associated with exposure to burns, but her family is convinced that was what killed her.

“What they were doing was wrong, especially right next to a base,” Brian Muller said.

“They could have figured out many other alternatives to make it safer for our troops. Instead, they put them in danger. It was worse than the war itself.”

Dr. Cecile Rose has been studying the effects of burns and other deployment-related toxins over the past decade, with some of the work funded by the U.S. Department of Defense.

The pulmonologist at National Jewish Health in Denver, Colorado, has seen about 300 returning veterinarians who have a variety of emission-related conditions, including rhinitis, sinusitis, emphysema, asthma and bronchitis.

“You have a generally healthy, fit, young adult population that then comes back with often debilitating breathing symptoms, including shortness of breath, which prevents them from meeting military fitness requirements and which also affects their quality of life.” said Dr. Rose.

She said there were no longitudinal data on other conditions, including cancer, yet.

But she said it was possible there were links.

“It’s certainly plausible that some cancers may be associated with exposure to things like combustion products because we know there are carcinogens in the smoke,” she said.

President Joe Biden has often linked the death of his son Beaus in 2015 to his exposure to burning pits in Iraq.

Beau Biden, who died of brain cancer in 2015, served as a major in the Delaware Army National Guard and was deployed to Iraq in 2008-9.

In an address to members of the service in May this year, the president said his son traveled to Iraq “like an incredibly healthy, young man and came back with a severe brain tumor because his tumor was just headwind from the burns”.

“I do not know if that is the reason, but he came home and it was just a question of how long he lived,” Mr Biden said.

The president’s personal involvement is one of the reasons advocates hope Congress will soon pass legislation that will see veterinarians who served near fire pits automatically have access to health care and disability services if they become ill. .

“I think it’s important that we do not allow burn pits to become Agent Orange for this generation,” said Aleks Morosky, an Iraqi veterinarian who became a lobbyist for the Wounded Warrior Project, which advocates for veterans.

It is estimated that 3.5 million US officials were stationed in Iraq and Afghanistan and in some of the surrounding areas during the wars that followed the 9/11 attacks.

“The use of combustion wells, toxic exposure, exposure to desert sand and other environmental hazards was so widespread that each one of them could really be in danger and could develop a condition at some point along the way,” Morosky said.

If the potential cost of covering these sounds astronomical, it does not worry Aleks Morosky.

“War is expensive,” he said.

The feeling is repeated by Julie Tomáška.

“People die, wait. They die quite often and wait for care. And that’s just not acceptable.”