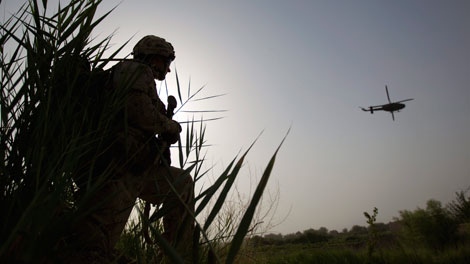 Former Windsorite Bruce Moncur is part of a non-profit group called “Valor in the Presence of the Enemy.”

They are trying to get a Canadian Victoria Cross awarded to a veteran of the Afghanistan war.

“If Jess is not worthy of Victoria Cross, I do not know who she is,” Moncur told CTV News from his workplace in Thompson, Man.

Moncur says on October 14, 2006, that Larochelle was “on guard” when 30 to 40 Taliban fighters “ambushed” the Canadians with a rocket-propelled grenade.

“And knocked him unconscious,” Moncur says. “And when he also came, two of his division were dead, and four others were wounded.”

Moncur says within 12 hours that Larochelle was fighting back against the Taliban, “essentially saving the position.”

It is believed that Larochelle also saved the lives of 30 Canadian soldiers in the process.

“(Larochelle) went back to base, carried private Blake Williamson’s coffin into the plane and then came forward and said I was injured,” according to Moncur.

Larochelle had a loosened retina, broken bones in her neck and back and a blown out eardrum.

Injuries that he continues to struggle with to this day, according to Moncur.

Larochelle has already been awarded the Military Star of Valor, but Moncur believes it should be upgraded to the Canadian Victoria Cross.

That price has four requirements, according to Moncur.

“Did you change the course of a fight? Were you injured? Did you save lives? And (perform) an incredible bravery,” he explained.

Moncur adds, “In my books, I feel like Jess has checked every single one of these boxes.”

Their non-profit group believes 10 veterans of the war in Afghanistan should be honored with Victoria Cross.

They launched an online signature collection for Veterans Affairs Canada in November 2021.

Moncur served in Afghanistan in 2006 in the same company as Larochelle.

Moncur was seriously wounded just weeks before Larochelle while engaged in Operation Medusa, the largest Canadian-led battle in the war in Afghanistan.

“My division was reduced from 40 to five who were not killed or wounded during the two days. September 3 and September 4, 2006,” Moncur said.

At the time 22, Moncur was hit by “friendly fire” shrapnel from a warplane.

Moncur suffered serious injuries to his head, back and hip.

“I should have five percent of my brain removed,” Moncur says. “I had to learn to read, write, walk and speak again.”

These injuries forced him to retire as he underwent “extensive” rehabilitation.

Today 38 Moncur fears that the victims of soldiers like himself and Larochelle will be overlooked.

“We feel like we’re already a forgotten war,” Moncur said.

In a written statement to CTV News, an unidentified Canadian military spokesman said an in-depth review took place in 2012 for all 20 people awarded the Star of Military Valor.

The email goes on to say:

“The Chief of Defense Staff is consulting with Commonwealth Allies and reviewing information specific to the request to reopen Private LaRochelle’s case.”

“Meanwhile, Canadians are encouraged to reflect and celebrate each of the 20 incredible recipients of the Star of Military Valor and the many other Canadians who were recognized for their gallantry and devotion to duty in this campaign. They are all the worthy successors to generations of Canadians. , who have demonstrated their abilities in combat in various conflicts around the word for the last 150 years. “