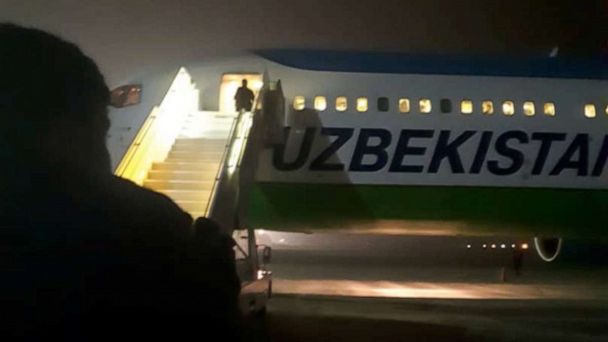 About 150 former Afghan air force pilots and personnel captured in Tajikistan for several months after fleeing Afghanistan have been flown by the United States out of the country to the United Arab Emirates.

The pilots had spent nearly three months in detention in Tajikistan after using their military aircraft to fly to Afghanistan’s northern neighbor when the Taliban captured Kabul in August. But some of the pilots found themselves in a scary limbo, detained in a hotel complex by Tajik authorities, where they said they spent weeks largely incommunicado and unsure whether they could be sent back to the Taliban.

The pilots who spoke to ABC News also said they were poorly fed and often lacked electricity in detention. Among them was a female pilot who was nine months pregnant, they said.

The pilots were taken to the airport in Tajikistan’s capital Dushanbe by US embassy staff last Tuesday and put on a charter flight to Dubai, according to the pilots and the Ministry of Defense. There, the evacuees were quarantined at a hotel and are now beginning the process of being assessed for resettlement, U.S. Pentagon spokesman John Kirby said Tuesday that the pilots were evacuated as part of a group of about 191 Afghans.

The evacuation took place as the United States continued to struggle with the colossal task of resettling tens of thousands of Afghans who served the United States and Afghanistan’s overthrown US-backed government and who are now at risk of being abused or executed by the Taliban.

“It’s just a huge relief,” said David Hicks, a former brigadier general and chief executive of Sacred Promise, a non-governmental organization run by current and former U.S. military officers who have been working to get the pilots out. “The team is hugely relieved and happy to have these people out and moving on to their next step towards freedom.”

In August, when the Taliban shut down, about 400 pilots and staff also used their planes to fly to Uzbekistan, where they were also detained. But the United States was able to negotiate their release in Uzbekistan faster and flew the group out in mid-September, officials said.

But negotiations to arrange the evacuation for them in Tajikistan took longer, and the pilots said they had been unsure whether they could be sent back. The Taliban had called on the pilots to return and have promised a general amnesty to former Afghan military personnel. But few of the pilots said they did not trust the guarantees.

“It was a tough time over there,” said Ahadi Ab Wajid, a lieutenant who piloted A-29 light reconnaissance aircraft and was evacuated Tuesday.

He spoke on the phone from Dubai and said in Tajikistan that the pilots had lived in poorly heated homes and at times had to drink river water.

Ab Wajid said the pilots were still worried about their families, many of whom had left Afghanistan.

“It’s hard for them because they left the place we used to live in. Now they live somewhere else and no one is there to support and help,” he said. “But still, thank God, thank God we’re out of there,” he said, referring to Tajikistan.

“All the guys are happy,” said Haseebullah Ibrahimkhail, a helicopter pilot also on Tuesday’s plane. “You can see it in their faces.”

Ibrahimkhail said he missed his wife and two young daughters, who are in Hungary now, after fleeing Afghanistan. He said he was also busy thinking about his comrades who are still in Afghanistan.

Thousands of former Afghan air forces and other military personnel are still trapped in Afghanistan, with many still appealing for the evacuation of the United States, according to Hicks. Ibrahimkhail said his former comrades fear execution if they are found and they barely go outside, meaning they are unable to work and are now struggling to feed their families.

The Taliban reportedly are looking for former military personnel, and some pilots have told ABC that their relatives had been questioned about their whereabouts.

Hicks NGO, Sacred Promise, is lobbying in the United States to prioritize the evacuation of the pilots still in Afghanistan, where he said the danger to them was growing.

“We get stories pretty much daily, either about beatings or having to move,” Hicks said. “And honestly, it’s not going to go away anytime soon – it’s going to continue, either until we get them out or until the worst happens.”