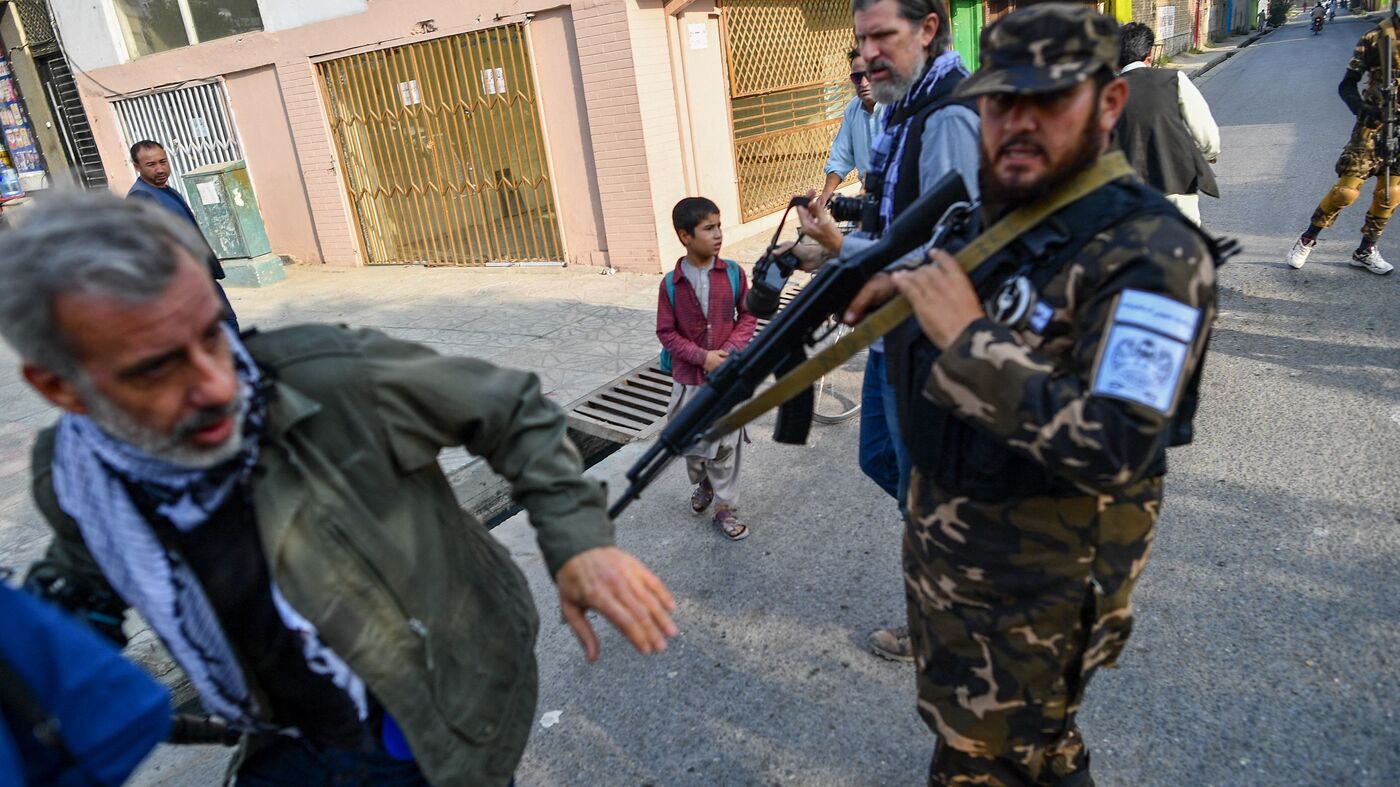 A member of the Taliban’s special forces is pressuring a journalist covering a demonstration by female protesters in Kabul on September 30.

A member of the Taliban’s special forces is pressuring a journalist covering a demonstration by female protesters in Kabul on September 30.

ISLAMABAD – The nightmares come easily and often for the Afghan journalist Taqi Daryabi.

When they do, the 22-year-old reporter for the Afghan newspaper Ethylthrose is instantly transported back to a damp room at a Taliban-controlled police station where a group of former fighters brutally beat him and his colleague Nematullah Naqdi last month to cover a women’s protest in Kabul.

“They all started beating me with whatever they had in their hands – with whips, batons, with rubber, with wood,” says Daryabi, who is still in and out of the hospital to be treated for his tears. “With whatever torture tool they had, they beat me until I fainted.”

Naqdi, his colleague, has partially lost his sight after the beatings he endured that day.

Afghan journalists Nematullah Naqdi, 28, and Taqi Daryabi, 22, show their injuries on Ethylthrose office in Kabul, 10 September. Taliban forces detained and beat them after covering a women’s protest in Kabul.

Afghan journalists Nematullah Naqdi, 28, and Taqi Daryabi, 22, show their injuries on Ethylthrose office in Kabul, 10 September. Taliban forces detained and beat them after covering a women’s protest in Kabul.

About 500 miles away, in the western city of Herat, it is not the past that haunts 26-year-old journalist Atefa. That is the fear of the future.

Atefa, who only wants to use his first name to protect his security, used to write critically about the Taliban’s attitudes and treatment of women for various Afghan news media. Now she’s in hiding.

Ever since the group recaptured Herat in mid-August, her neighbors have told her the Taliban have been looking for her. In recent weeks, she has been receiving text messages from unknown numbers containing creepy video clips. She suspects they are from the Taliban, and warns her of what is to come.

Reporting has long been a dangerous and even deadly business for Afghan journalists. They have been hit by attacks and kidnappings, some of which have been claimed by the Taliban. Now, with the Taliban in power, the mix of threats, detentions and vague media rules plus a shattered economy has set the clock back on Afghan media progress.

More than 150 media companies and radio stations across the country have shut down, according to TOLO News, Afghanistan’s most prominent broadcast news media. Hundreds of Afghan journalists have fled the country since Taliban forces took control of Kabul in August.

Those who have become, like Daryabi and Atefa, say they do not know where the Taliban’s red lines are. Many have stopped working for fear of retaliation, violent assaults and unexplained detentions.

“The Taliban do not have full control over the way its people operate,” said Steven Butler, Asia’s program coordinator at the Committee to Protect Journalists.

He has been following the cases of Afghan journalists, saying there appears to be an interruption between Taliban leaders who publicly insist they support press freedom and its infantry, which imposes harsh punishments.

Taliban leaders claim that those now patrolling the streets have spent the last 20 years fighting, not policing or engaging in civil society. Some lower-level Taliban admit they are struggling to adapt to their new lives and miss the battle.

Taliban officials use this as a justification for media restrictions.

“We have repeatedly said that we believe in freedom of expression in the media,” Taliban spokesman Inamullah Samangani told NPR. “Of course, because the situation is not normal yet and is not completely under control, we want to prevent some irregular and disorderly scenarios and ensure the safety and security of journalists … to pave the way for them to report. Right now, in places as military centers or places that are still controversial and belligerent and not yet completely in our control – we advise journalists not to report from there. “

To add to the confusion, Samangani denies the existence of 11 strict rules for the press, announced by Qari Muhammad Yousuf Ahmadi, the Taliban’s interim director of the government’s media and information center, at a news conference on September 19.

For now, Samangani specifies two general prohibitions: “There are two issues we will not tolerate – when our religious rights are attacked, and secondly, when there is an obvious agenda against our national interests,” he says. “Beyond these two points, I told you that we are open to accepting criticism and we can be held accountable. But the problem is that the regime is not well formed yet. It is being formed and it is ours. “This is when all institutions should start their affairs first, and this will allow for better cooperation and dissemination of information. That is when we will be ready to have long investigative histories and we will cooperate with them.”

When asked about the violent detention of Daryabi and his colleague, Samangani expresses regret but denies the guilt.

“We believe the journalists were the victims of an illegal protest. The protest was not run in cooperation with the government and judicial systems,” he says. “Unfortunately, the mujahideen who were there for safety were not aware of it and were not prepared to deal with it.”

It is unlikely that the Taliban will promote press freedom

Even the most ardent critics of the US military involvement in Afghanistan consider the flourishing of Afghan media as one of the country’s biggest success stories in the last 20 years. Few could have imagined that television – largely banned under Taliban rule in the 1990s – or radios that carried only propaganda and Islamic programming at the time would eventually offer a vibrant array of news, programs, and entertainment. This year, the country had about 70 TV stations, more than 170 FM radio stations and 175 newspapers.

Butler fears that Afghanistan is likely heading for a system in which the Taliban control what journalists write. “Journalists who cross a line will get into trouble one way or another,” he warns.

As foreign correspondents are called upon to cover other crises and conflicts, the world’s attention will inevitably turn away from Afghanistan. It is at that moment that the story of Afghanistan will fall completely on the shoulders of Afghan journalists – and that, says Butler, is when the Taliban’s true attitudes to a free press will come into focus.

“You have to ask yourself, is this a government that is willing to accept criticism, you know, sharp criticism that a free press would normally deliver?” says Butler. “I think that’s unlikely.”