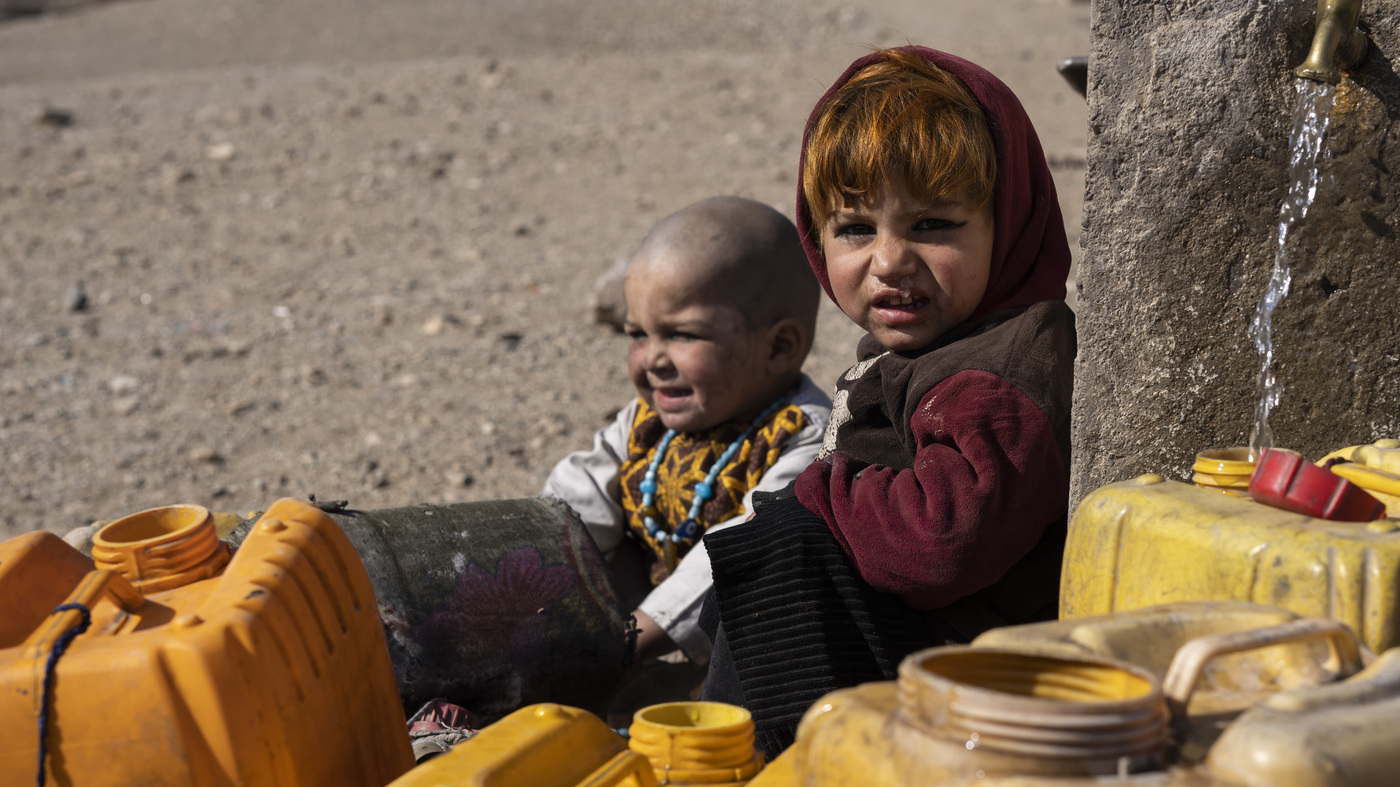 Two Afghan children are sitting next to a tap while people in the village of Kamar Kalagh outside Herat, Afghanistan, try to fill their plastic containers with water.

Two Afghan children are sitting next to a tap while people in the village of Kamar Kalagh outside Herat, Afghanistan, try to fill their plastic containers with water.

UNITED NATIONS (AP) – The UN humanitarian chief warned that Afghanistan’s economic collapse is “happening before our eyes” and called on the international community to take steps to stop the “free fall” before it leads to more deaths.

Martin Griffiths said in an interview with The Associated Press on Thursday that donor nations need to agree that in addition to humanitarian aid, they must support basic services to the Afghan people, including education, hospitals, electricity and paying officials – and they must inject liquidity into the economy, which has seen the banking system “” pretty well shut down. “

“We see the economic collapse being exponential,” he said. “It’s getting more and more awful every week.”

Griffiths said the liquidity issue needs to be resolved by the end of the year and money needs to be channeled to frontline staff over the winter, adding that he needed to revise his previous view that Afghanistan could get through the winter on purely humanitarian aid because of the deteriorating economic situation.

As an example, he said, 4 million children are out of school and 9 million more will soon be, and the reason is simple – 70% of teachers have not been paid since August. “And if we do not make that happen, all that discussion about women’s and girls’ right to go to school will be academic,” he said.

“So, my message today is a wake-up call about the humanitarian consequences of an economic collapse and the need to take urgent action,” Griffiths said.

The Taliban overran most of Afghanistan as US and NATO forces were in the final stages of their chaotic withdrawal from the country after 20 years. Taliban forces entered Kabul on August 15 without resistance from the Afghan army or the country’s president, Ashraf Ghani, who fled. The Taliban originally promised tolerance and inclusiveness towards women and ethnic minorities, but their actions so far, including renewed restrictions on women and the appointment of a male-only government, have been met with dismay by the international community.

Afghanistan’s aid – dependent economy was also plunged into deep unrest following the Taliban’s takeover. The Afghan central bank’s reserves of $ 9 billion, most of which are located in the United States, were frozen, and the International Monetary Fund blocked about $ 450 million due to a “lack of clarity” about a new government.

The Taliban leadership has banned all foreign exchange transactions and called on the United States to ease sanctions and release Afghanistan’s overseas assets so that the government can pay teachers, doctors and other public sector employees.

Griffiths said the UN is asking the United States and other donors for money, which he insisted will not go to the Taliban, but through UN channels to get directly to the people who need it – teachers, doctors, electricity suppliers and other officials .

Griffiths said the consequences of Afghanistan’s collapsing economy are becoming clearer – reports of hospitals without electricity, severe malnutrition and three or four children in a hospital bed and tens of thousands of unpaid doctors, teachers and officials struggling to survive.

He recalled that the United States always supported the supply of electricity in Afghanistan, but 80% of the electricity sources are “now on the verge of stopping, and without electricity you have automatic consequences.”

Griffiths said the World Bank, the UN and the US government are making “a huge effort” to resolve the liquidity crisis. He said he would go to Washington on December 21 to meet with US Secretary of State Antony Blinken to discuss Afghanistan’s collapsing economy.

“At the end of the year, I would like to see the onset of liquidity decline as an issue,” he said.

Griffiths said the United Nations would like to see $ 700 million come through by January 31, which will be earmarked for services to help the Afghan people.

He said the World Bank reprogrammed $ 280 million to Afghanistan for humanitarian aid, which was “really good.”

Griffiths said the U.S. Treasury Department also needs to deliver letters to traders in Afghanistan saying they do not violate sanctions. The United States has cut humanitarian exemptions from sanctions, and he said the UN Security Council needs to do the same.

Griffiths warned that if critical services are not provided to the Afghan people, “we know what’s going to happen.”