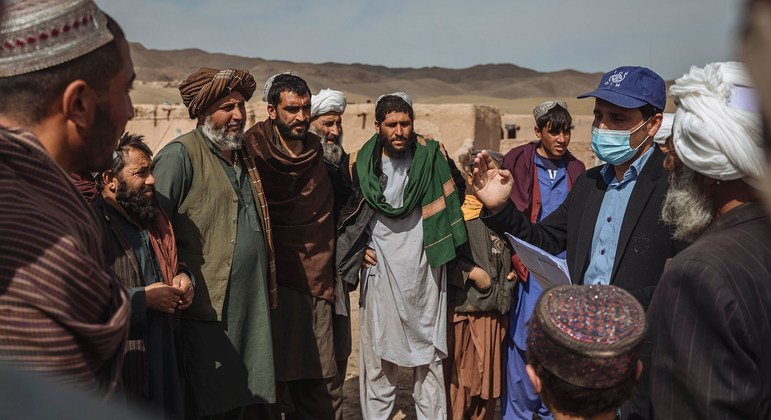 The High Commissioner for Human Rights said in a statement that there was “fear and apprehension” throughout Afghanistan that had driven people to flee their homes.

Women have been whipped and killed in areas flooded by extremists, while journalists and human rights defenders have also been attacked and killed, Bachelet said.

Reports by violations that “may correspond to war crimes and crimes against humanity”Have appeared, including” deeply disturbing reports “about summary execution of surrendered government troops. Since July 9, in four cities alone – Lashkar Gah, Kandahar, Herat and Kunduz – at least 183 civilians have been killed and 1,181 injured, including children.

On Monday, the United Nations Children’s Fund (UNICEF) also reported a rapid escalation of child abuse in Afghanistan following the deaths of 27 children in the country within the past 72 hours and 136 injured. Men “the real number could be much higher“, as” these are just the civilian victims we have managed to document, “Bachelet said.

Even before the Taliban’s recent military offensives against urban centers, the UN had documented a sharp rise in civilian casualties.

The militants who were displaced in the weeks following the September 11, 2001 attacks on the United States are now able to advance from various directions on Mazar-i-Sharif, the largest city in the north, according to recent news reports.

‘Living in fear and dread’

In Geneva, High Commissioner Bachelet’s spokeswoman Ravina Shamdasani said people “rightly” feared that the Taliban would erase the human rights gains of the last two decades as US and international forces completed their withdrawal from Afghanistan.

She reiterated the High Commissioner’s condemnation of reported Taliban violence against communities, including women, rights activists and journalists, and told correspondents that “women are already being killed and shot for breaking the rules, “while” some radio stations have stopped broadcasting “.

In Balkh province, “a women’s rights activist was shot and killed for violating the rules,” Ms. added. Shamdasani. The OHCHR had also received reports of “summary executions, attacks on current and former officials and their family members, destruction of homes, schools and clinics and the laying of a large number of IEDs (improvised explosive devices), “in areas already captured by the Taliban and in disputed areas,” she said.

Half of the population is at risk

The head of the International Organization for Migration (IOM) on Tuesday also expressed his concern about the impact of the conflict on displaced people and those on the move, including returnees.

With more than 5 million people already internally displaced – more than 359,000 so far this year and a record number of undocumented migrants – around 680,000 Afghans have returned during the first seven months of this year, according to the Border Patrol and Refugee Directorate. Repatriation (DoRR).

Director-General António Vitorino said that together with the country is “in the throes of a third wave of COVID-19 and a severe drought,” almost half of Afghanistan’s population is in need of emergency assistance and the need is expected to increase.

By insisting on unhindered access to staff and service providers, “all parties to the conflict and neighboring countries” must “do” everything they can to ensure that border crossing points remain open and humanitarian workers are able to access vulnerable populations in border areas, “Mr Vitorino said.

Families on the run

Calls for restraint have also come from the International Committee of the Red Cross (ICRC), which called on the international community to provide more protection for civilian and vital infrastructure, such as hospitals, against attacks and help prevent side damage caused by fighting in populated areas.

Since August 1, the organization has treated 4,042 patients wounded by gunfire at 15 ICRC-supported health facilities and nearly 13,000 patients in July alone, while the ICRC’s medical services have been heavily burdened due to injuries and staff shortages.

“We are seeing homes destroyed, medical staff and patients at enormous risk, and hospitals, electricity and water infrastructure damaged,” Eloi Fillion, ICRC’s Head of Delegation in Afghanistan, said in a statement.

“The use of explosive weapons in cities has an arbitrary impact on the population. Many families have no choice but to flee in search of a safer place. This must stop.”

According to the ICRC, electricity is out across several disputed cities and water supply systems are almost non-operational in some places. Many families try to leave but cannot find transportation to escape or simply do not have the financial means.