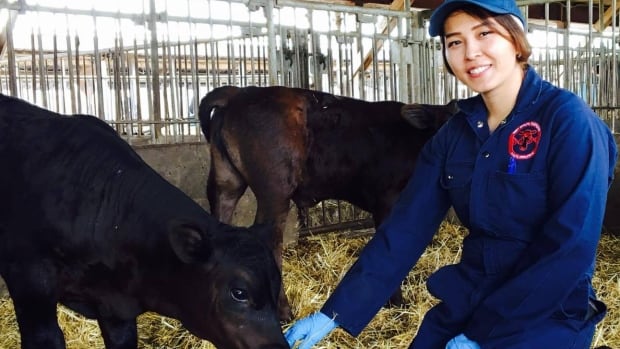 Nasrin Husseini spent her childhood in Iran, a refugee from Taliban-controlled Afghanistan that prevented her from seeking an education in her home country.

She was determined not only to go to school – but to help other refugees.

Now, a refugee lawyer and researcher at the University of Guelph, Husseini is among an annual list of 100 exceptional women published by the BBC.

A childhood spent as a refugee

Although Husseini and her family spent much of her childhood in Iran, they returned to Afghanistan in 2004 after the fall of the Taliban. They arrived to find a changed country.

“Afghanistan was a male-dominated country in the years after the Taliban,” she said CBC Radio in an interview in 2017. “It was a little stressful to go out on the streets, to walk alone.”

She thanks her father for helping her and her sisters navigate these years and for supporting her choice to take an education. She was among the second class of women to graduate from Kabul University’s veterinary program – and finished at the top of her class.

She enrolled at the University of Guelph shortly after arriving in Toronto around 2010, this time as a refugee to Canada. Husseini took a master’s degree in immunology and now works as a veterinary researcher for the university.

As a volunteer, she works with the organization Canadian Hazara Humanitarian Services, a Brampton-based non-profit that helps members of Afghanistan’s ethnic group Hazara settle in Canada, as well as with the Bookies Youth Program, which promotes literacy and storytelling for Afghan children.

The BBC says the 2021 list highlights the bravery and achievements of Afghan women following the resurgence of the Taliban, which regained control of the country in August.

Many appear on the list under pseudonyms, without photographs or accompanied by drawings showing those covering their faces with their hands, something Husseini says was particularly resonant for her as a co-candidate.

“The women who work from inside Afghanistan, they are the real heroes,” she says. “That their pictures are not there says a lot about the situation in Afghanistan right now … it is definitely an honor for me to be among those women.”

Women from Afghanistan accounted for half of those recognized by the television company this year.

Husseini says she hopes to continue supporting women in Afghanistan and Afghan refugees living in countries such as Pakistan, Iran and Indonesia. She hopes her inclusion on the list will help her raise money for the charities she works with in Canada.

Soon, she says, she would like to write a book about her life in the hope that other young girls can follow her.

A sense of responsibility

“I really want to write my own story or biography because I know it will be inspiring for other girls,” she says. “I really hope this recognition helps people read my story and learn about the people of Afghanistan.”

She shares this year’s BBC list with Malala Yousafzai, a famous girl education activist and the youngest recipient of the Nobel Peace Prize ever, and with Sister Ann Rose Nu Tawng, a Catholic nun who became a symbol of Myanmar’s protest movement after a picture of her kneeling in front police in defense of protesters spread globally on social media.

Husseini says her inclusion on the list comes with an increased sense of responsibility.

“It makes the weight on my shoulders heavier, but at the same time it motivates me and helps me work harder.”