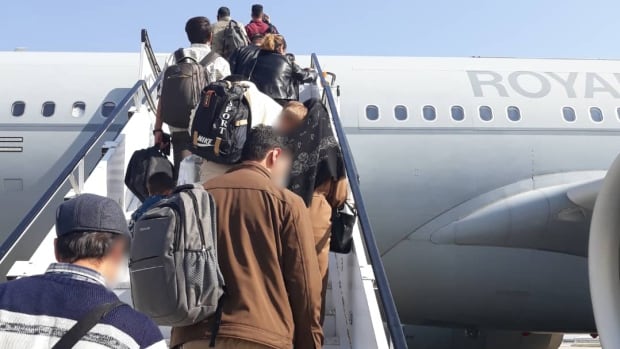 A Toronto-based charity has played a key role in helping a group of LGBTQ Afghans escape the Taliban after a months-long, cross-continental campaign to get them out of Kabul.

After receiving hundreds of requests for help from Afghans who fear for their safety, Rainbow Railroad, a group that helps LGBTQ people escape persecution, has worked with a British charity called Stonewall to help community air transporters to United Kingdom

The first group of 29 people boarded a military plane on Friday en route to an unknown location in Britain, the British Foreign, Commonwealth and Development Office announced.

“Rainbow Railroad’s hope is that they will be the first of hundreds to arrive in the UK through this scheme and that other governments, particularly the US and Canadian governments, will work with us on similar operations,” said Eric Wright, the Canadian charity. communications officer, in a press release Friday.

Following the group’s quarantine at a hotel, they will then be resettled in the UK.

Wright said some of the 29 are students and others are defenders of LGBTQ rights in Afghanistan, making them targets for the Taliban.

Homosexuality is criminalized under Afghan law, where offenders risk imprisonment or a maximum death sentence. A 2020 U.S. State Department report on human rights in Afghanistan showed that LGBTQ people were discriminated against in employment and health care, and they are also vulnerable to beatings and sexual assaults by security forces.

‘Living in fear for their lives’

The campaign involved “months of partnership development and direct advocacy for the UK Government at the highest level”, Wright said, including an urgent letter sent to British Foreign Secretary Dominic Raab and Prime Minister Boris Johnson on August 27, a few days before the evacuation efforts from Kabul ended. The last American plane left Hamid Karzai International Airport on 30 August.

The letter, jointly signed by Stonewall CEO Nancy Kelley and Rainbow Railroads CEO Kimahli Powell, requested emergency assistance to air transport LGBTQ Afghans who were “at extreme risk of torture and death at the hands of the Taliban and already living in fear for their lives. “

The two charities adhered to a list of 200 people who were within easy reach of Kabul airport, hoping to get “as many people on this list as possible” before the air transport effort ended. But Britain withdrew from Afghanistan the next day.

Rainbow Railroad says it has received more than 700 requests for help from LGBTQ people in Afghanistan since the Taliban took over. The group says more than a quarter of the number of requests for help come in each year from around the world. As a result, the group has hired additional staff specifically to deal with Afghanistan cases.

Charity urges Canada to step in

Only 29 people could be flown at a time because of the operation and the extreme security risks posed by the movement of people across borders, Wright said, as well as the Taliban actively pursuing LGBTQ people, their limited mobility due to fear of violence and the lack of help from other governments other than Britain

Wright urged the Canadian government to step in to help LGBTQ people resettle in Canada as well.

“The former immigration minister has been tweeting about this since the beginning, but we need more than this. We need Canadian moral and humanitarian leadership on this file.”

When the last Canadian evacuation flight left Kabul on August 26, former immigration minister Marco Mendicino tweeted his intention to help provide safe passage for Afghan refugees, such as people from the LGBTQ community, to enter Canada.

“Our evacuation is nearing completion, but our commitment to the people of Afghanistan is as strong as ever. In the coming months, we will welcome thousands of vulnerable Afghan refugees who have been forced to flee to other countries – with a focus on women. religious minorities, LGBTQ people and others, “Mendicino’s tweet said.

In total, Canada aired more than 3,700 people from Afghanistan.

Our evacuation is nearing completion, but our commitment to the people of Afghanistan is as strong as ever.

In the coming months, we will welcome thousands of vulnerable Afghan refugees who have been forced to flee to other countries – focusing on women, religious minorities, LGBTQ people and others. pic.twitter.com/t2EmTllnvi

More LGBTQ Afghans are expected to arrive in the UK in the coming months.

In a statement issued by the British Foreign Office on Friday, Rainbow Railroad CEO Kimahli Powell said: “This is only the beginning of our efforts to help hundreds of LGBTQI + individuals we support in Afghanistan move to safety.”