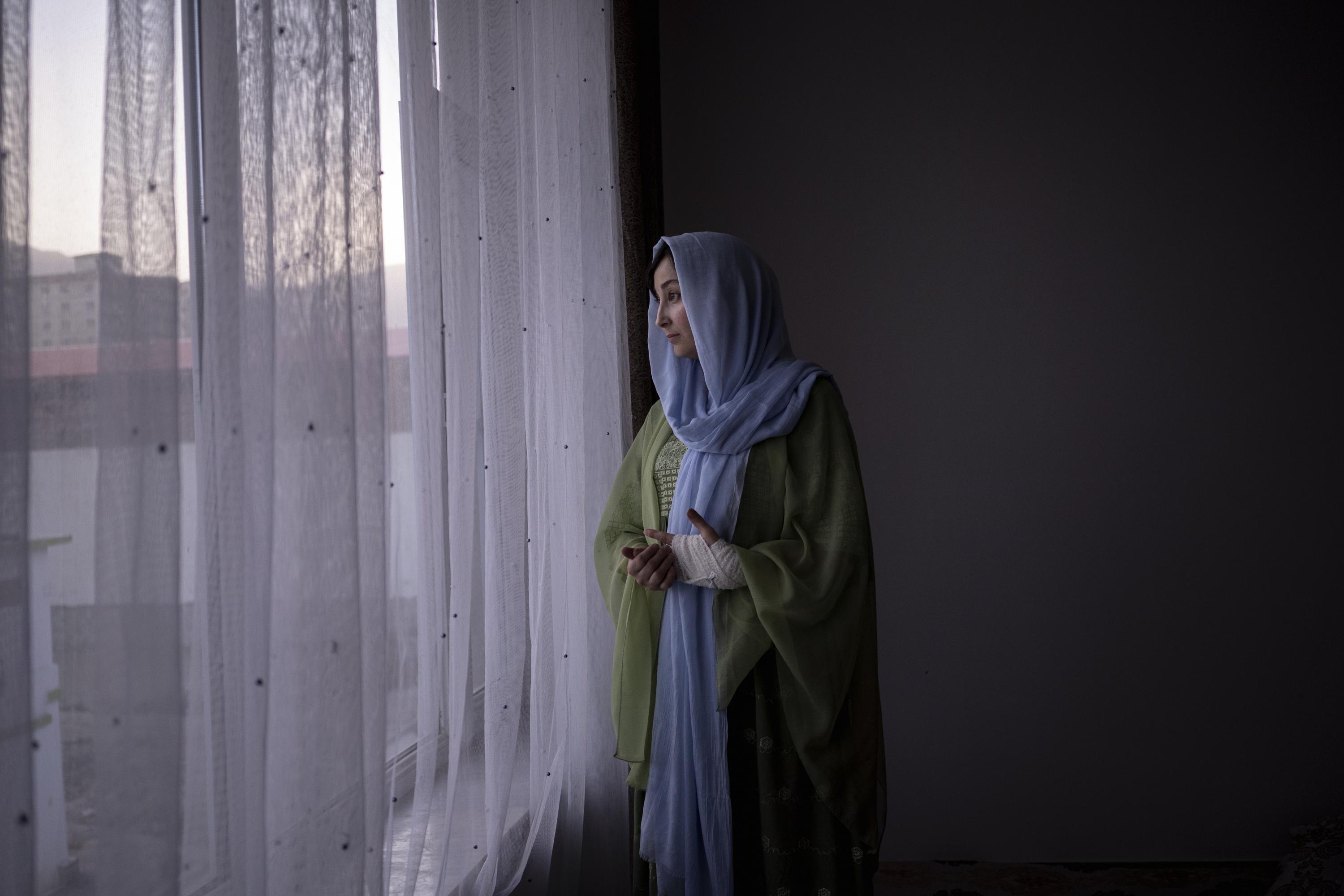 KABUL, Afghanistan (AP) – Two women from different walks of life – one a rebel, the other a bureaucrat – face an unknown future in Afghanistan. One decided to work with the Taliban, the other is determined to fight them. Both promise that they will never leave their homeland.

Karima Mayar Amiri, 54, heads a department in the Taliban-run health ministry. She is among the few women who can retain a leadership position in the new government’s bureaucracy and believes that Afghans must be served, no matter who is at the helm.

Many years her younger, Rishmin Juyunda, 26, could not disagree more. Afghan women will never be served by the Taliban in power, she says. The rights activist is part of an underground network determined to fight harsh Taliban policies that restrict women’s freedom.

They represent a broad spectrum of women who have remained in Taliban-controlled Afghanistan after many fled, fearing a return to the brutal repression that marked the group’s previous rule in the late 1990s. The international community has linked the recognition of a Taliban government to factors such as guarantees of women’s rights.

It is not clear what rights women will be able to retain. Under the Taliban, women in most government ministries are now unable to work, teenage girls are banned from going to school, the temporary cabinet is made up entirely of men. This deepens the distrust of the Taliban.

But there are exceptions.

Amiri, a mother of six, retained her senior position as director of the ministry’s quality and safety department following the collapse of the former US-backed government. Her case is rare; most senior female bureaucrats have been excluded from working across public portfolios except health.

She is in the office at 9 to lead a team of five. Almost every day, she meets with her Taliban-appointed superiors to review action plans to combat the spread of diseases from coronavirus to dengue fever.

“It was not a difficult decision for me to stay. I have my own department. If they ask for a plan, I will give it. The Taliban leadership wants me to work for them and I am ready,” she said. “As long as I am healthy, I will work for them, for my people, my country.”

Juyunda is entering its final semester specializing in economics at Zahra University in Tehran. She chose to stay in Kabul’s capital and study at a distance after the Taliban took power in August. Textbooks overwhelm her desk, but her focus is interrupted by a buzzing phone. In a series of WhatsApp messages, rights activists suggested slogans for the next demonstration.

Like many young women who grew up after the US invasion in 2001, Juyunda’s dreams were shattered overnight, after the Taliban captured Kabul and consolidated control of the country. Many of her friends have gone, reluctant to wait and see how the dust will settle after the dramatic American exit.

She became. “I will never leave Afghanistan. I have to stay and make a change, ”she said with her lively hazel eyes framed by a scarlet scarf.

The decision to stay came in the midst of large-scale evacuation.

Between Kabul’s fall on August 15 and the last US exit two weeks later, thousands of Afghans, including many women, rushed to the city’s airport in a desperate attempt to get out.

Three days after the Taliban overran the capital, she was back in office to help meet the growing needs of the crumbling healthcare sector. International aid, which once financed the salaries of hospitals and health workers, had stopped abruptly. Hospitals across the country were hit hard by an economic crisis caused by international sanctions against the Taliban.

She requested that her Taliban superior merge her department with another to improve quality control. They approved it.

When a Taliban guard tried to inspect her bag at the minister’s gate one morning, she refused, asking for a separate room for women’s control to be built. They complied.

She graduated from Kabul Medical University 31 years ago and has worked for the Ministry of Health since 2004. Five health ministers have come and gone during her tenure. “Why should the Taliban be different?” she asked.

The only change they introduced was that women wore Islamic dress. Amiri, a devout Muslim, was already in the habit of wearing a headscarf.

“Health is not political,” Amiri insists. The guidelines, her office formulates, are sent to thousands of public hospitals, clinics and facilities across the country. “Life goes on,” she says.

But for Juyunda, life will never be the same.

It took her weeks to recover from the shock of the takeover. Her family of 11 had benefited greatly after the American invasion. She and her four sisters were able to attend school in Ghor province. Her parents had well-paid public jobs. She was on her way to becoming an economist filled with ideas to improve her country.

From social media, she learned of a women’s protest organized outside the Pakistani embassy in Kabul in September. Shortly after she arrived, a Taliban unit appeared and the group had to disperse. She stood there with a sign “Education is a right” and repeated to herself, “I am strong, they are weak.”

She witnessed protesters being beaten with rifles and cables. This is war, she thought.

Numbers were exchanged, and soon a network of dozens of like-minded activists was formed.

The Taliban have said they have no problem with the right to protest, but that activists should seek their permission to demonstrate. Subsequent sit-ins have not been able to draw large numbers. But Juyunda said seeking permission from the Taliban would be an implicit acceptance of their rule.

“We will never do that,” she said.

Both women’s lives were shaped by Afghanistan’s turbulent history.

Amiri was a gynecologist in the conservative Wardak province, a Taliban stronghold as far back as the 1990s, when the group was first in power.

To survive, she said, she made her world a little smaller.

“During that time, I went to the hospital, I treated patients, gave birth to babies and had surgeries, and then I went straight home. That was my life,” she said.

In 2021, she returned to the same tactics. After 3.30pm, she leaves the office and goes straight to her home in Kabul to spend the evening with her children and grandchildren.

Juyunda’s childhood was marked by the violence of the Taliban uprising in the years following the American invasion. She saw entire buildings go up in flames after rocket attacks and bombings.

At night she slept with a glass filled with water. “I thought if a bomb ever hit our home, I could use it to put out the flames,” she recalled, smiling at the thought of her childhood naivete.

The bombings have stopped, but Juyunda’s war for women’s rights continues.

Amiri, meanwhile, is hopeful. “Let’s see what happens,” she said.