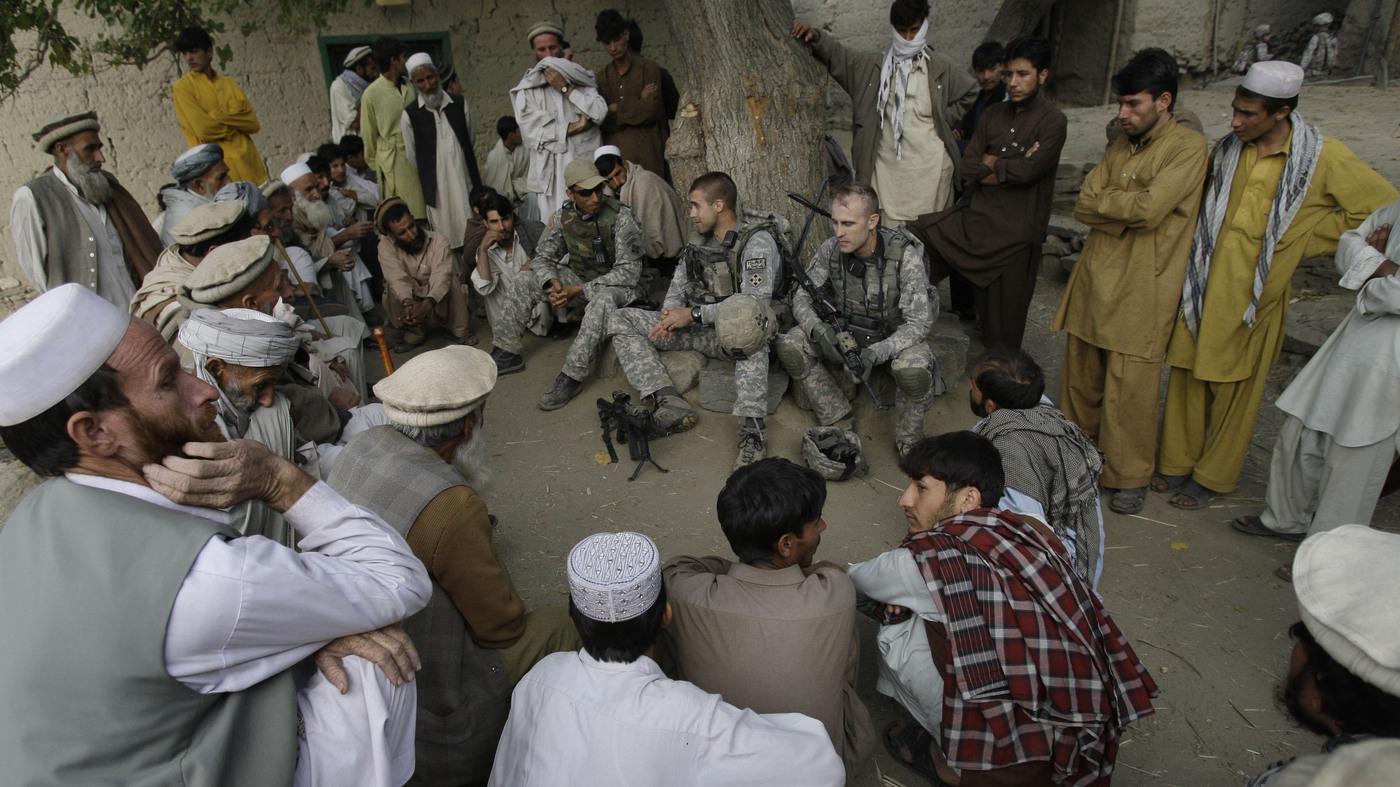 A U.S. lieutenant, in the middle, meets with villagers in Afghanistan’s Kunar province in 2009, assisted by an interpreter sitting to his right wearing a baseball cap. The United States will begin evacuating about 18,000 Afghan nationals who helped with military operations along with their families in late July.

A U.S. lieutenant, in the middle, meets with villagers in Afghanistan’s Kunar province in 2009, assisted by an interpreter sitting to his right wearing a baseball cap. The United States will begin evacuating about 18,000 Afghan nationals who helped with military operations along with their families in late July.

The United States will start flying Afghan citizens who supported the United States and coalition operations in Afghanistan, according to a senior official in the Biden administration. Evacuation flights begin in the last week of July.

During the 20-year war in Afghanistan, thousands of Afghan citizens served as interpreters, provided intelligence, and assisted the United States and its coalition partners as drivers, security guards, and in other roles.

Approximately 18,000 Afghan nationals, along with tens of thousands of their family members, have applied for special immigrant visas to the United States. However, administrative delays have long meant that the visa process can take years, allowing the backlog to grow.

Now that the US withdrawal is 95% complete – and the Taliban’s control of the country is growing day by day – the threat of revenge attacks on those known to have worked with the US is at a renewed high.

During the operation, called Operation Allies Refuge, as many as 70,000 people will be flown out of Afghanistan to one or more third countries while awaiting visa processing. These third countries could include Uzbekistan, Tajikistan or a country in the Middle East or Europe, according to a senior Pentagon official who was not authorized to speak in public. It could also include the US territory of Guam.

According to the administration official, the operation will be led by the longtime Foreign Ministry Ambassador Tracey Jacobson, who previously served as Head of Mission in Kosovo, Tajikistan and Turkmenistan. Russ Travers, deputy national security adviser and former head of the National Counterterrorism Center, will help coordinate between federal agencies.

The evacuation faces serious challenges, defense analysts say. Many of the applicants and their families live outside Kabul in regions already captured or disputed by the Taliban. It can be difficult for embassy officials to contact people in rural areas.

Pressure had been mounting on the White House for several months to take concrete steps to evacuate interpreters and other Afghan nationals.

Last month, a two-part group of house lawmakers, several of whom served in the Middle East along with interpreters and fixers from Afghanistan and Iraq, introduced legislation to ease administrative barriers.

These obstacles included requiring visa applicants to get a medical examination that was only available at a single clinic in Kabul, lawmakers said. Applicants can now graduate within 30 days of arriving in the United States

The bill was authored by Rep. Brad Wenstrup, a Republican who served as a combat surgeon in Iraq, and rep. Jason Crow, a Democrat who made three trips as an Army Ranger in Iraq and Afghanistan. It passed Parliament at the end of last month with overwhelming bipartisan support and has gone to the Senate.