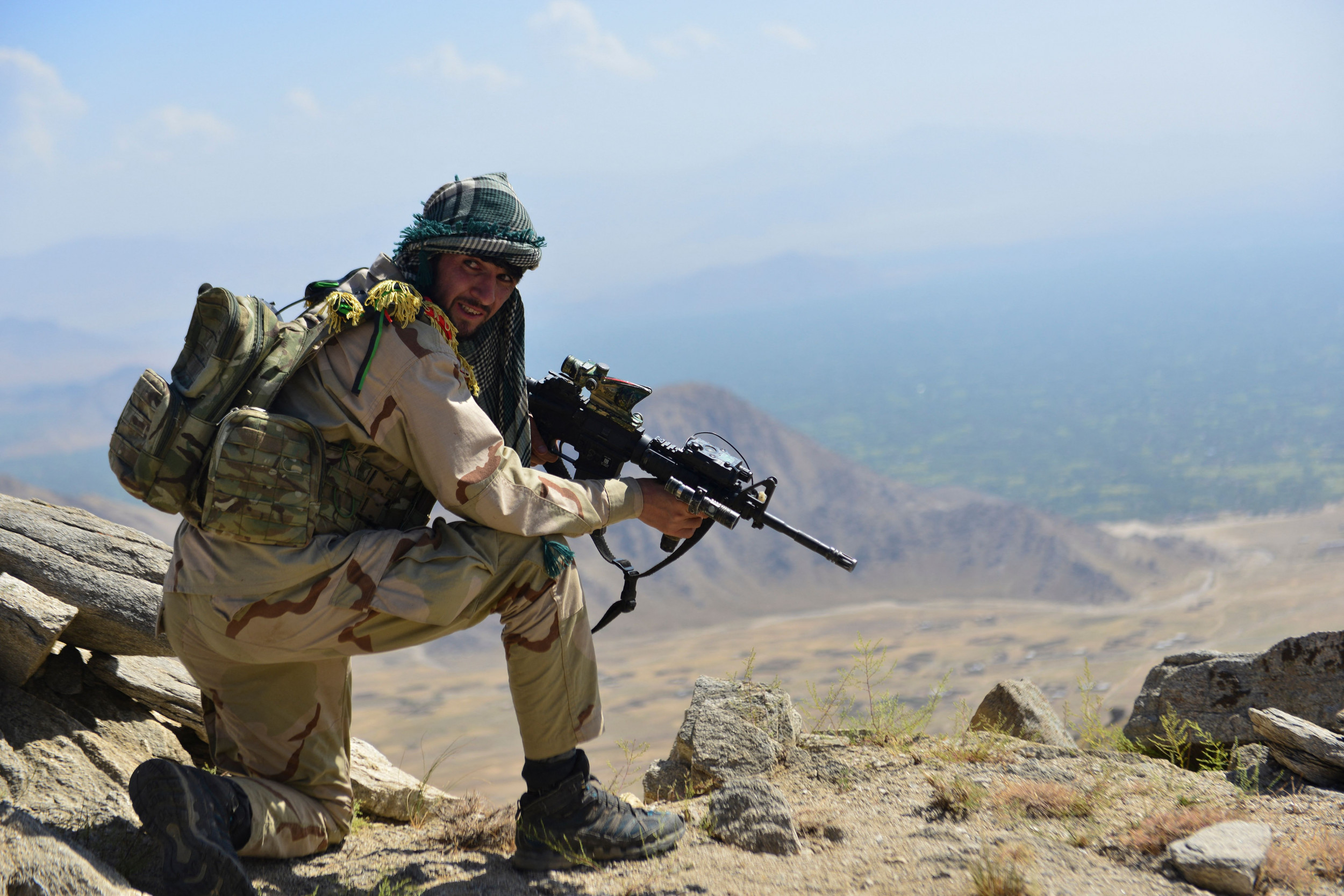 The opposition, which leads the last bastion of resistance against the Taliban regime in Afghanistan, has said Newsweek that if the rebels were to lose, the United States would simultaneously lose its last ally in a country it had just withdrawn from earlier in the week after 20 years of war.

Ali Nazari, the spokesman for the forces of the National Resistance Front, now besieged by the Taliban in the Panjshir Valley, said his group is the last hope for the West to take on transnational militant groups who again want to use the Taliban-controlled country to attack targets abroad. .

And while the apostate province has so far survived, clashes with the Taliban have worsened, and the lack of international aid bodes ill for its future.

“So if the National Resistance Front, God forbid, is eventually defeated,” Nazary added, “the United States and the European Union and others who oppose transnational terrorism and see a threat from these groups will not have an ally in Afghanistan. if they are forced to return to the country or intervene in a year or so. “

The Taliban, officially called the Islamic Emirate in Afghanistan, has promised not to allow any groups to attack other nations or to allow any further intervention outside the country. The group’s officials have also said they were seeking a peaceful solution to the problems in Panjshir, but negotiations between the two sides broke down over the past week and fighting broke out.

Both sides blame each other.

“We tried to reach a peaceful solution with [the Panjshir forces] and that is why we gave them a chance for 15 days after the conquest of Kabul, “said Qari Saeed Khosty, who runs the self-proclaimed Islamic Emirates’ social media. Newsweek. “We gave them a chance, then another, but they will waste time.”

“Because of that,” he added, “the Islamic Emirate decided two days ago to launch a four-way operation.”

Nazary shared his own perspective, saying there was “a gentlemen’s agreement that both sides would not attack each other.” At least the Taliban launched its attack, he claimed.

The naturally fortified Panjshir Valley and its inhabitants have gained a reputation for their defiance, with the famous Ahmad Shah Massoud leading guerrilla forces rejecting Soviet intervention in the 1980s and a previous Taliban takeover in the 1990s. The so-called “Lion of Panjshir” went on to warn of a major conspiracy planned against the West, but was eventually killed by al-Qaeda suicide bombers on September 9, 2001, two days before 9/11.

These deadly attacks spurred the US-led intervention, which saved what was then known as the Northern Alliance, and established a new government in Kabul. But the Taliban maintained a strong revolt that prompted former President Donald Trump to conclude a peace deal with the group in February 2020. His successor, President Joe Biden, promised to uphold the agreement as the Taliban advanced across the country against collapsing Afghan security forces, and The United States implemented a nerve-wracking airlift out of Kabul airport when the capital collapsed overnight.

Now that the Taliban are once again in control of most of the country, Massoud’s son, Ahmad Massoud, is once again averting enemies from his base in Panjshir. With ongoing clashes and interrupted communication, Nazary has been tasked with speaking on his behalf.

Nazary said the National Resistance Front’s forces “prefer peace to war” but would not give in until two important conditions were met.

He argued that it would not be enough for the Taliban to simply appoint a few representatives of rival ideologies as well as non-Pashtun ethnic minorities such as Tajiks, Hazaras and Uzbeks.

“It means equal and equitable distribution of power,” Nazary said, “and the only solution to this is decentralization and the creation of a federalized Afghanistan and the preservation of democracy.”

He said the National Resistant Front was open to negotiating the specific type of democracy that was being formed, “but democracy should be the only method, the only system of leaders to be elected.”

He stressed the importance of having a representative government.

“We are against any kind of council that consists of only a few individuals associated with one political force to elect the leader or leaders of the country,” Nazary said.

The second demand from the National Resistance Front has to do with religion, specifically the country’s relationship to Islam.

“Islam is the vast majority religion, but we do not accept the interpretation, the doctrine of Islam, that the Taliban adhere to because it is a doctrine that has been imported into Afghanistan,” Nazary said. “It is not rooted in our culture, it is not compatible with our culture and traditions.”

Nazary rejected the harsh brand of Islam practiced by the Taliban, saying that Afghanistan’s history was more closely linked to a “rationalist interpretation of Islam”, as well as “Sufi Islam, which has its roots in the mystical identity and the mystical doctrine of faith. system that the people of Afghanistan have always had. “

“We value the rights and freedoms of all citizens, regardless of race, religion or gender,” Nazari said. “Everyone must have equal rights, equal opportunities and must be free. All citizens of the country must enjoy their freedom.”

Until these two demands are met, Nazary said the National Resistance Front would fight on.

“We are not willing to compromise on these values, on these principles, and that is why we are moving on to resistance,” Nazary said. “And it’s not just demands on the people of Panjshir, it’s on all of us.”

And he stressed that this is not a new struggle for his people.

“These are things we cherish, values ​​we cherish that we have fought for the last half century,” Nazary said, “and we are willing to continue our struggle or resistance until we reach it.”

Khosty claimed that the targets for the Panjshir resistance were high. He said the demands discussed between the Taliban and the National Resistance Front were “too high” and “above” what could be compromised at this point.

“If God wills,” he added, “there will soon be a solution for Panjshir.”

With no solution on the horizon, the fighting rages again in the valley. This time, however, is different.

During the beginning of the Northern Alliance’s struggle against the Taliban more than a quarter of a century ago, the resistance received support from regional countries, including Russia, India, Iran, Tajikistan and Uzbekistan. Today, many of these countries, especially the great powers, have adopted a far more diplomatic approach to the Taliban.

No nation has yet recognized the Taliban’s Islamic Emirate, as was the case before 2001, when Pakistan, Saudi Arabia and the United Arab Emirates established formal relations. The international community has almost unanimously called for the establishment of an inclusive government in Afghanistan, and at the same time, many governments have not ruled out establishing ties with a Taliban-affiliated administration should such a condition be met.

Opposition is against the recognition of the Taliban.

“We are against any legitimacy and recognition for the Taliban government or for an Islamic emirate,” Nazary said, “because legitimizing or recognizing such a government or even cooperating with them will encourage other terrorist groups throughout the Islamic world, will encourage “and will create a very radical regime in Afghanistan that we will have to tolerate for decades to come.”

Allied with Massoud and the National Resistance Front in Panjshir is former Afghan First Vice President Amrullah Saleh, who has declared himself acting head of state in the wake of then-President Ashraf Ghani’s sudden flight from the country when the Taliban occupied Kabul earlier this month.

“Talib has blocked humanitarian access to Panjshir, made racial profiles of travelers, used Panjhsir military men as demining tools to carry them to mines, has shut down telephones, electricity and even allowed medicine. People can only carry small amounts of cash,” Saleh tweeted. Friday, one of the sparse messages coming from dissident province officials.

Nevertheless, diplomatic engagements continue with the Taliban, whose political leader Abdul Ghani Baradar is ready to be a potential leader of the self-proclaimed Islamic Emirate. Even as violence escalates in the Panjshir Valley and surrounding areas, Taliban diplomats taking part in talks in Qatar’s capital Doha are talking to envoys from around the world, including Western nations such as Germany and Britain.

And Pentagon Press Secretary John Kirby delivered a message when reporters on Thursday asked if the U.S. military was considering supporting those rising against the Taliban.

In Panjshir, the struggle continued with frustration.

“We are fighting this alone because we are not currently receiving any kind of support or assistance from anyone,” Nazary said.

This article has been updated to include comments from Qari Saeed Khosty, who is in charge of social media for the Taliban.