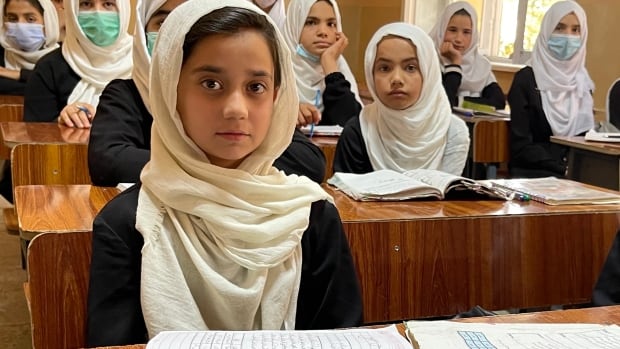 For a brief moment in the wood-paneled courtyard of the Malalai School in Kabul, it is as if nothing else matters.

Dozens of schoolgirls hold hands, swirl around as they dance together in a circle, and their giggles ring through the air. Others sit in line with their faces serious while singing a song about unity in Afghanistan together.

It is the easy joy of youth, but for schoolgirls under Taliban control, it is devastatingly insecure.

Inside the school in the Afghan capital, 6th grade students, now the oldest female students in Malalai, are studying today’s lesson, as the fear that their education may be in jeopardy weighs on their minds.

“I was saddened when I heard that the upper classes can not go to school [anymore], “said Rahna, who was sitting in the front row of the class.

“I do not know if it’s our last year. If next year, can we get to school or not?”

About 1,000 students at this school alone have been forced to stay at home since the Taliban prevented female students in 7th grade and above from going to school for weeks after taking power back from the Western-backed government after 20 years of war.

The extremist authorities have said that the move is only temporary. But more than a month has passed and hundreds of thousands of female students are stuck at home, with their dreams and potential in danger of being wasted.

“I hope … we can continue our education until we get a good job,” Rahna said. “I want to be a doctor to serve my nation.”

‘Education is our power’

A few days after the Taliban’s victory in August, government spokesman Zabihullah Mujahid held his first press conference. He promised that the new Taliban regime was “committed to women’s rights” within the framework of its strict interpretation of Islamic law.

“Our sisters, our men have the same rights,” Mujahid said. “The international community, if they have concerns, we would like to assure them that there will be no discrimination against women, but of course within the framework we have.”

But in mid-September, when high schools were allowed to reopen, only boys were allowed to return to class. Girls were completely left out of the message – invisible despite the promise to respect women’s rights. The UN says 4.2 million Afghan children are currently out of school, including 2.6 million girls.

Taliban officials, including Mujahid, have since said a “safe learning environment” must be established before girls in their senior years can return to classes. But there are few details on what it means or when it may be in place.

Every day that passes brings more heartache to the young women who fear that their future will disappear.

“They know that education is our power,” said Massouda, 18, a college student who was studying engineering when the previous government fell.

She is now unsure whether she will be able to resume her studies.

Massouda is not her real name. CBC News has agreed not to name her because her family fears the Taliban’s retaliation for speaking out.

She flips through a scrapbook of school certificates and brilliant reports from former teachers.

“I have lots of goals,” Massouda said, her voice crushed and tears streaming down her cheeks. “I think I’ll not reach them.”

SE | How life has changed for girls and women in Afghanistan:

Taliban takeover changes lives for women and girls in Afghanistan

Two months after the Taliban took power in Afghanistan, women and girls have had their lives disrupted and plans have been changed after losing the ability to go to school or work. 6:49

While the vast majority of girls are currently excluded from going to grades 7 to 12, there are some regions in the country where female high school students have been allowed to return to class. It is unclear why this happens in some areas and not nationwide.

Taliban officials have also said that women can continue their university studies, but access has been severely restricted.

All areas on university campuses must be gender segregated, including classrooms; strict Islamic dress is mandatory; the subjects women are allowed to study are under revision; and according to Taliban rules, female students should only be taught by female teachers – even as many women have been told by the Taliban to stay home from work.

Lots of professionals and academics were among the tens of thousands of Afghans who fled the country during the evacuation in August, limiting the number of teachers available. Many of those still teaching do not get paid as Afghanistan faces a dangerous cash squeeze.

Kabul University has been shut down completely for now. Its chancellor was replaced last month by a Taliban nominee with no academic experience. Other public universities across the country also remain closed.

“I can not be a girl who should get married and have children,” Massouda said. “I want to work. I want to go out and study, to do something for my country.”

Instead of attending classes, Massouda now spends his days at home with his family, trying to beat back his sadness by reading English-language books and doing his best to study alone.

‘Half of our society belongs to women’

The restrictions raise fears among Afghan girls and women that the Taliban’s assurances that women’s rights will be protected are just empty promises; that a repetition of its harsh rule of the 1990s, in which women were excluded from school and largely confined to their homes, is once again taking hold.

There are other worrying signs for women. There are no women in the government and the Ministry of Women has been transformed into the Ministry of Propagation of Virtue and Prevention of Load.

Yet some say they believe positive change is on the way.

She says the current Taliban regime is more educated than the last.

“I have confidence that they will open our schools to all women and girls,” Nuristani said.

“Half of our society belongs to women.”

But women’s rights activists say the only way half of the Afghan community can get their full rights is with pressure from the international community.

Foreign aid has long been Afghanistan’s lifeblood, but most of it was frozen after the Taliban took power. Without it, the country is on the brink of economic collapse with a humanitarian catastrophe that is seemingly inevitable.

Most households already do not have enough to eat, banks are running out of money, and Afghans are selling their household goods on the sides of busy roads to make ends meet.

Despite the increasingly desperate reality for the Afghan people, the international community is reluctant to provide more aid until the actions of the Taliban show that women and girls will be treated equally.

“The Taliban do not have much time to sit down and think and dwell and rethink,” said Mahbouba Seraj, a prominent women’s rights activist in Kabul who is on Time Magazine’s list of the 100 most influential people in 2021.

“There is no rethinking of this. Girls, they have to go to school. Dot.

SE | “They can not hold the girls back,” activist Mahbouba Seraj said:

Mahbouba Seraj, head of the Afghan Women’s Network, discusses the Taliban’s return to power and the future of women’s rights in Afghanistan with CBC’s Susan Ormiston. 5:02

But some Afghan women, encouraged by the ambitions they have long nurtured, refuse to wait patiently. Instead, they agitate for their rights on the street and on social media.

Small protests take place every few weeks in Kabul – and have also taken place in other cities – organized by brave young women holding signs and marching even after violent Taliban defeats of previous demonstrations.

“If we want to raise our voice, we should accept some risks and difficulties for ourselves in order to get our rights,” said Zwaak, a university student in law and politics. “Therefore, we accept this risk of participating in this protest.”

Zwaak is not her real name. It’s a pashto word for “power” and is the alias she chose when CBC News agreed to withhold her name.

A young activist and artist, Zwaak uses his paintings and writings to advance the cause of Afghan women – and creates burning images depicting a dark gift for women desperate to learn.

Zwaak continues to fight and steels himself against growing fears that it may become a losing battle.