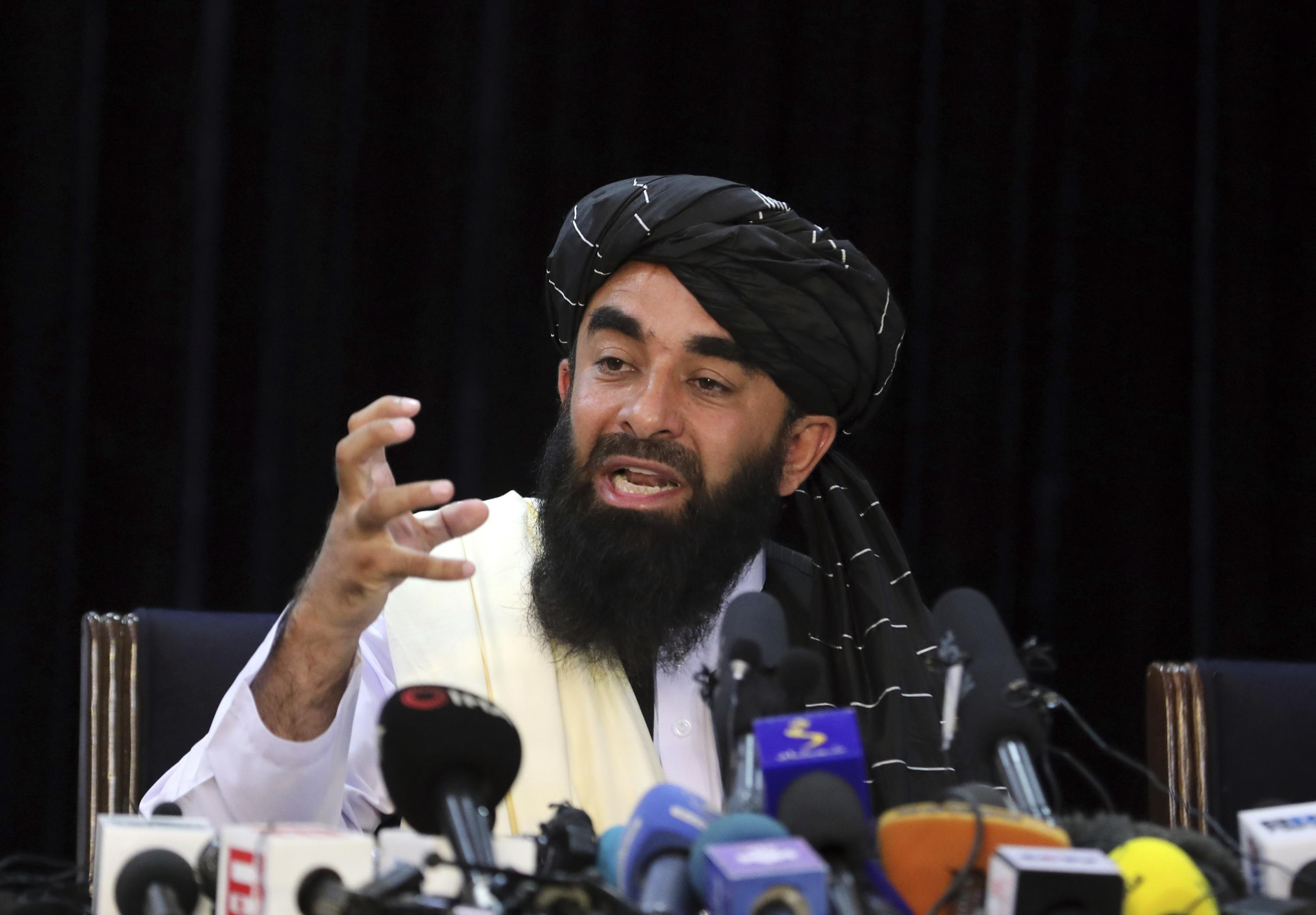 KABUL, Afghanistan (AP) – The Taliban on Tuesday pledged to respect women’s rights, forgive those who fought them and ensure that Afghanistan does not become a haven for terrorists as part of an advertising blitz aimed at reassuring world powers and a frightened population.

After a lightning offensive across Afghanistan as so many cities fall to the rebels without a fight, the Taliban have tried to portray themselves as more moderate than when they introduced a strict form of Islamic rule in the late 1990s. But many Afghans remain skeptical and thousands have fled to the airport, desperate to flee the country.

Older generations remember the previous rule of the Taliban, where they largely imprisoned women in their homes, banned television and music, and held public executions. A US-led invasion drove them out of power months after the 9/11 attacks that al-Qaeda had orchestrated from Afghanistan while under the cover of the Taliban.

Zabihullah Mujahid, the Taliban’s longtime spokesman, emerged from the shadows on Tuesday in his first ever public appearance to address those concerns at a news conference.

He promised that the Taliban would honor the rights of women within the norms of Islamic law, without elaborating. The Taliban has urged women to return to work and has allowed girls to return to school and hand out Islamic scarves at the door. A female news anchor on Monday interviewed a Taliban official in a television studio.

The treatment of women varies widely across the Muslim world and sometimes even within the same country, where rural areas tend to be far more conservative. Some Muslim countries, including neighboring Pakistan, have had female prime ministers, while ultra-conservative Saudi Arabia only recently allowed women to drive.

Mujahid also said that the Taliban would not allow Afghanistan to be used as a base to attack other countries, as it was in the years before 9/11. This assurance was part of a 2020 peace deal reached between the Taliban and the Trump administration that paved the way for the US withdrawal.

The Pentagon said U.S. leaders are communicating with the Taliban while working to evacuate thousands of people through Kabul International Airport. It said the Taliban had not taken any hostile actions there.

Mujahid reiterated that the Taliban have offered full amnesty to Afghans working for the United States and the Western-backed government, saying “no one will go to their doors to ask why they helped.” He said private media should “remain independent”, but that journalists “should not work against national values.”

Kabul, the capital, has remained calm while the Taliban patrol its streets. But many remain fearful after prisons and weapons depots were emptied out during rebel sweeps across the country.

Residents of Kabul say groups of gunmen have gone door-to-door to seek out people working for the ousted government and security forces, but it was unclear whether the gunmen were Taliban or criminals posing as be militant. Mujahid blamed the previous government for security collapse and said the Taliban only went into Kabul to restore law and order after the police melted away.

A television station in Afghanistan said she hid in a relative’s house, too scared to return home much less go to work. She said she and other women do not believe the Taliban have changed their ways. She spoke on condition of anonymity because she feared for her safety.

A group of women wearing Islamic headscarves briefly demonstrated in Kabul with signs demanding that the Taliban not “eliminate women” from public life.

U.S. National Security Adviser Jake Sullivan said the United States and other governments will not just take the Taliban at its word when it comes to women’s rights.

“As I have always said, this is not about trust. This is about verifying,” Sullivan said at a White House briefing. “And we will see what the Taliban end up doing in the coming days and weeks. , and when I say we, I mean the whole international community. “

Whatever their true intentions, the Taliban have an interest in projecting moderation to prevent the international community from isolating their government, as it did in the 1990s.

The European Union said it was suspending development aid to Afghanistan until the political situation became clearer, but that it would consider increasing humanitarian aid.

Foreign Minister Dominic Raab said Britain could provide up to 10% more humanitarian aid, but that the Taliban would not receive any money previously earmarked for security.

Evacuation flights resumed after being suspended on Monday as thousands of people rushed to the airport. In shocking scenes recorded on video, some clung to a plane as it took off and then fell to its death. At least seven people died in the airport chaos, U.S. officials said.

On Tuesday, the Taliban entered the civilian half of the airport and fired into the air to drive about 500 people out there, said an Afghan official who spoke on condition of anonymity because he was not authorized to brief journalists.

The Taliban appeared to be trying to control the crowd instead of preventing people from leaving. A video circulating online showed the Taliban monitoring the orderly departure of dozens of foreigners.

The U.S. Embassy in Kabul, now operating from the military side of the airport, urged Americans to register online for evacuation, but not to arrive at the airport before being contacted.

The German Foreign Ministry said a first German military transport plane landed in Kabul, but took off with only seven people on board due to the chaos. Another later went with 125 people.

US President Joe Biden has defended his decision to end the United States’ longest war, and blame the Taliban’s rapid takeover of Afghanistan’s Western-backed government and security forces. NATO Secretary General Jens Stoltenberg reiterated that assessment, while saying the alliance must investigate the flaws in its efforts to train the Afghan military.

Talks continued Tuesday between the Taliban and several Afghan politicians, including former President Hamid Karzai and Abdullah Abdullah, who once chaired the country’s negotiating council. The Taliban have said they want to form an “inclusive, Islamic government.”

The talks focused on how a Taliban-dominated government would function given the changes in Afghanistan over the past 20 years, rather than just splitting ministries, said officials familiar with the talks on condition of anonymity to discuss the closed-door talks.

A top Taliban leader, Mullah Abdul Ghani Baradar, arrived in Kandahar on Tuesday night from Qatar, potentially signaling that a deal is imminent.

The vice president of the ousted government, meanwhile, tweeted that he was the country’s “legitimate” interim president. Amrullah Saleh said he should be held accountable under the constitution because President Ashraf Ghani has fled the country.