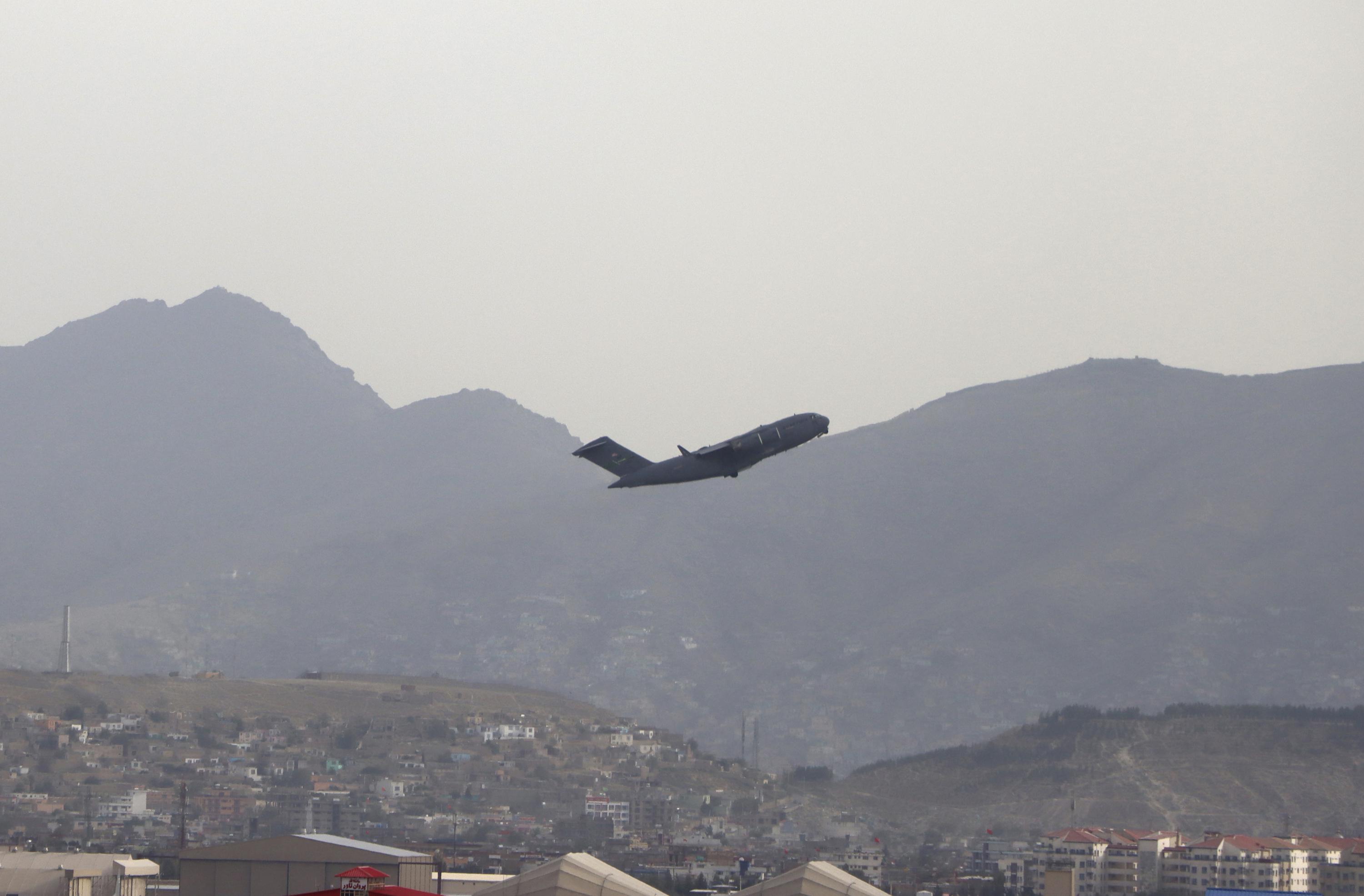 KABUL, Afghanistan (AP) – Taliban fighters saw the last US planes disappear into the sky over Afghanistan around midnight on Monday and then fired their weapons into the air, celebrating victory after a 20-year uprising that drove the world’s most powerful military out of a . of the poorest countries.

The departure of US cargo planes marked the end of a massive airlift in which tens of thousands of people fled Afghanistan, fearing the return of the Taliban regime after the militants took over most of the country and rolled into the capital earlier this month.

“The last five planes are gone, it’s over!” said Hemad Sherzad, a Taliban fighter stationed at Kabul International Airport. “I can not express my happiness in words. … Our 20 years of sacrifice worked.”

In Washington, General Frank McKenzie, chief of the U.S. Central Command, announced the end of the United States’ longest-running war and evacuation efforts, saying the last planes took off from Kabul airport at 6 p.m. 15:29 EDT – one minute before midnight Monday in Kabul.

“We didn’t get everyone out the way we wanted to get out,” he said.

With its last troops gone, the United States ended its 20-year war with the Taliban back in power. Many Afghans remain afraid of their rule or of further instability, and there have been sporadic reports of killings and other atrocities in areas under Taliban control, despite the group’s promises to restore peace and security.

The United States and its allies invaded Afghanistan shortly after the September 11, 2001 terrorist attacks on the United States, which al-Qaeda orchestrated while under cover under Taliban rule. The invasion drove the Taliban out of power in a matter of weeks and dispersed Osama bin Laden and other top leaders of al-Qaida.

The United States and its allies launched an ambitious effort to rebuild Afghanistan after decades of war, investing billions of dollars in a Western government and security forces. Women who had been largely confined to their homes under the harsh rule of the Taliban enjoyed access to education and came to assume prominent roles in public life.

But the Taliban never disappeared.

In the years to come, as the United States focused on yet another turbulent war in Iraq and the Afghan government was bound by corruption, the Taliban regrouped in the countryside and in neighboring Pakistan. In recent years, large parts of Afghanistan’s rural areas have been seized, carrying out almost daily attacks on Afghan security forces.

Eager to end the war, the Trump administration signed a peace deal with the Taliban in February 2020, paving the way for the withdrawal. President Joe Biden extended the deadline from May to August and continued with the withdrawal despite the Taliban’s rapid flash across the country earlier this month.

Now the Taliban control all of Afghanistan except the mountainous Panjshir province, where a few thousand local fighters and remnants of Afghanistan’s collapsed security forces have promised to resist them. The Taliban say they are seeking a peaceful solution there.

They face much greater challenges now as they rule one of the poorest and most war-torn nations on Earth.

In recent days, Afghans have lined up outside the banks as an economic crisis that precedes the Taliban’s takeover worsens. A series of attacks by local affiliates of Islamic State extremist groups, including a barrage of rockets fired at the airport on Monday, highlight the security challenges facing the Taliban.

Thursday a Islamic State suicide attack at an airport gate, at least 169 Afghans and 13 U.S. officials were killed. The extremist group is far more radical than the Taliban, and the two groups have previously fought each other. The Taliban say they want to prevent Afghanistan from being used again as a base for terrorist attacks, a promise that is likely to be tested soon.

McKenzie said the Taliban were “significantly helpful” in activating the airlift, but will have difficulty securing Kabul in the coming days, not least because of the threat they face from IS. He said the Taliban had freed IS fighters from prisons, increasing their ranks to an estimated 2,000.

“Now they will be able to reap what they sowed,” the American general said.

Many Afghans even fear the Taliban, who ruled the country under a harsh interpretation of Islamic law from 1996 to 2001. In those years, they banned television and music, prevented women from going to school or work outside the home, and carried out public executions.

The Taliban has been trying to present a more moderate picture since taking power. They say women will be able to go to school and work, and they have renounced any revenge attack on Afghans who worked with the previous government, the United States or its allies.

Many Afghans are deeply skeptical of such promises, and fears of Taliban rule have driven tens of thousands to flee the country over the past two weeks. Thousands waited in vain outside the airport, many of them standing for hours in a sewage canal.

Kabul International Airport had been one of the few resorts. At one point, people streamed out onto the asphalt, and seven fell to their deaths after clinging to a plane that was about to take off. Another seven died in a stampede by people outside an airport gate.

The Taliban have said they will allow normal travel, but it is unclear how they will operate the airport and which commercial airlines will start flying in, given security concerns.

Qatar, a close US ally that has long hosted a Taliban political office, has been involved in negotiations on airport operations with Afghan and international parties, mainly the United States and Turkey. Qatar’s Deputy Foreign Minister Lolwa al-Khater said its main priority was to restore normal operations while maintaining airport security.

The last known U.S. military operation in Afghanistan came on Sunday when U.S. officials said a drone strike blew up a vehicle with IS suicide bombers who were planning to attack the airport.

But like so much about the Afghanistan war, it may not have gone as planned.

Relatives of those killed in Sunday’s strike said it killed civilians who had nothing to do with the extremist group.

Najibullah Ismailzada said his brother-in-law, Zemarai Ahmadi, had just returned from his job working with a Korean charity. As he drove into the garage, his children came out to greet him, and that was when the missile hit.

“We lost 10 members of our family,” Ismailzada said, including six children raging between the ages of 2 and 8. He said another relative, Naser Nejrabi, who was a former soldier in the Afghan army and a former U.S. military interpreter. , was also killed along with two teenagers.

U.S. officials have acknowledged the reports of civilian casualties without confirming them.

“Of course, the loss of life from anywhere is terrible, and it affects families, no matter where they live, in the United States or around the world,” she said.