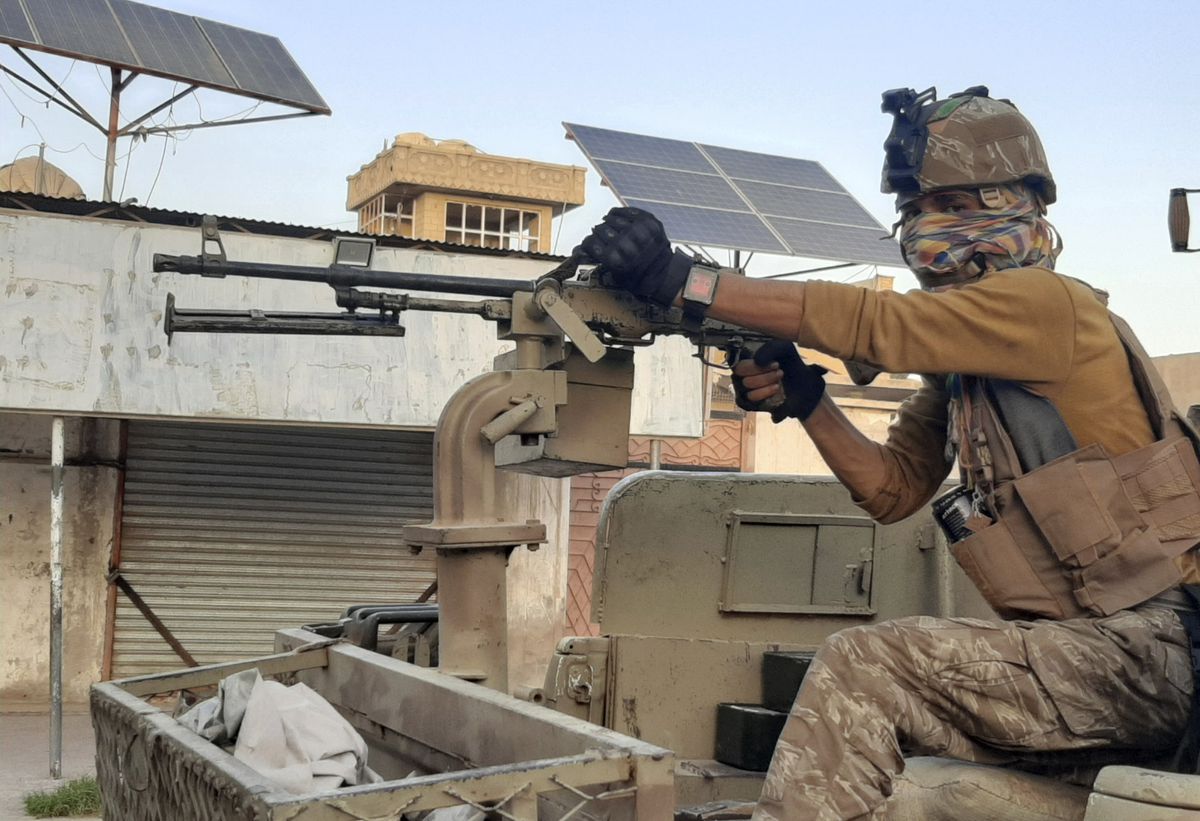 The Taliban pressed on with their progress in southern Afghanistan on Tuesday, capturing nine out of 10 districts in Helmand’s provincial capital, residents and officials said. Afghan government forces launched airstrikes, backed by the United States, in a desperate attempt to defend the city of Lashkar Gah.

The fall of Lashkar Gah would be a major turning point in the offensive that the Taliban has been waging in recent months as US and NATO forces complete their withdrawal from the war-torn country. It would also be the first provincial capital that the Taliban conquered in years.

City residents who spoke to the Associated Press over the phone said the fighting has left them trapped, hunkered down in their homes and unable to step out after basic supplies. They said Taliban fighters were openly out in the streets and that all but one Lashkar Gah district was under Taliban control.

Elite command units were sent from Kabul to help Afghan forces as the government held on to key government buildings, including local police and army headquarters.

Majid Akhund, deputy chairman of Helmand’s provincial council, confirmed that the Taliban control nine Lashkar Gah districts and also the city’s TV and radio station, both of which had gone off the air.

The commander of the Afghan force for Helmand, General Sami Sadat, in an audio message shared with journalists on Tuesday, urged residents of Taliban-occupied neighborhoods to evacuate immediately, although he did not clarify how they could do so. in the midst of the ongoing clashes. The message was an indication that more airstrikes were planned.

“Please evacuate your families from your homes and their surroundings,” General Sadat said. “We do not want to leave the Taliban alive. … I know it’s hard … we do it for your future. Forgive us, if you are displaced for a few days, please evacuate as soon as possible. “

Lashkar Gah is one of three provincial capitals besieged by the Taliban as they escalated their attacks on government forces. In recent months, the Taliban swept through dozens of districts across the country, many in remote and rural areas, sparsely populated areas.

Afghan troops in these battles often surrendered or withdrew with barely a battle, often lacking supplies and reinforcements. In recent weeks, the Taliban have also conquered several lucrative border crossings with Iran, Pakistan and Tajikistan.

In the Afghan capital Kabul on Tuesday, dozens of people waving the Afghan flag and shouting “God is great” took to the streets in support of Afghanistan’s national security and defense forces. They came out even when a powerful explosion rattled the city. No one took immediate responsibility.

A similar march took place in the western city of Herat on Monday after Afghan soldiers pushed the Taliban back from the entrance to the city.

The Taliban have recently turned their weapons against provincial capitals, as the withdrawal of US and NATO forces is now more than 95 percent complete. The last US and NATO soldier is expected to leave Afghanistan on 31 August.

The other two provincial capitals under siege are in the neighboring province of Kandahar, also in the south, and in the western province of Herat.

Afghan President Ashraf Ghani on Monday blamed the hasty withdrawal of US and NATO troops for the deteriorating security situation, while analysts say deep corruption and poor training have left Afghan forces overwhelmed, leaving elite command units as the only bulwark against the advancing Taliban.

Afghanistan’s air force has been severely wounded by the US and NATO withdrawal, which included contractors who had maintained its fleet of fighter jets. Washington’s watchdog, which oversees U.S. taxpayer dollars spent in Afghanistan, said Afghan planes fly 25 percent longer than they should before being maintained.

In Herat, the capital of the province of the same name, Afghan forces showed up on Tuesday to push the Taliban back, with the rebels on the outskirts of the city. Herat city’s civilian airport also reopened.

The United Nations has repeatedly condemned the rise in civilian casualties inflicted by both sides in the increasingly brutal conflict. The UN mission in a tweet on Tuesday appealed for a speedy end to the fighting in densely populated urban areas. In the past three days, the UN said 10 civilians had been killed in Lashkar Gah and 85 were wounded. In southern Kandahar, at least five civilians were killed and 42 wounded.

Several thousand have been displaced, the UN said. Residents of Lashkar Gah said airstrikes inside the city also drove people from their homes.

“With every bomb hitting the city, my 13-year-old son jumps and shouts,” said Mohammad Khan, a resident of Lashkar Gah. He had moved half of his family out of town and tried to evacuate the other half before the fighting set him free.

Another resident of Lashkar Gah, Nizamuddin, who like many Afghans uses only one name, said he hid with his family in their home and was too scared to step out.

The United States and other world leaders have warned the Taliban against a military takeover of Afghanistan, saying they would become an international pariah again if they tried to seize power by force.

When they last ruled Afghanistan, the Taliban were recognized by only three countries – Pakistan, Saudi Arabia and the United Arab Emirates.

Also on Tuesday, the US embassy in Kabul tweeted: “The Taliban’s disregard for the dignity of every Afghan citizen and for human life in a broader sense has shocked the world. This is not how legitimate powers or governments behave.”