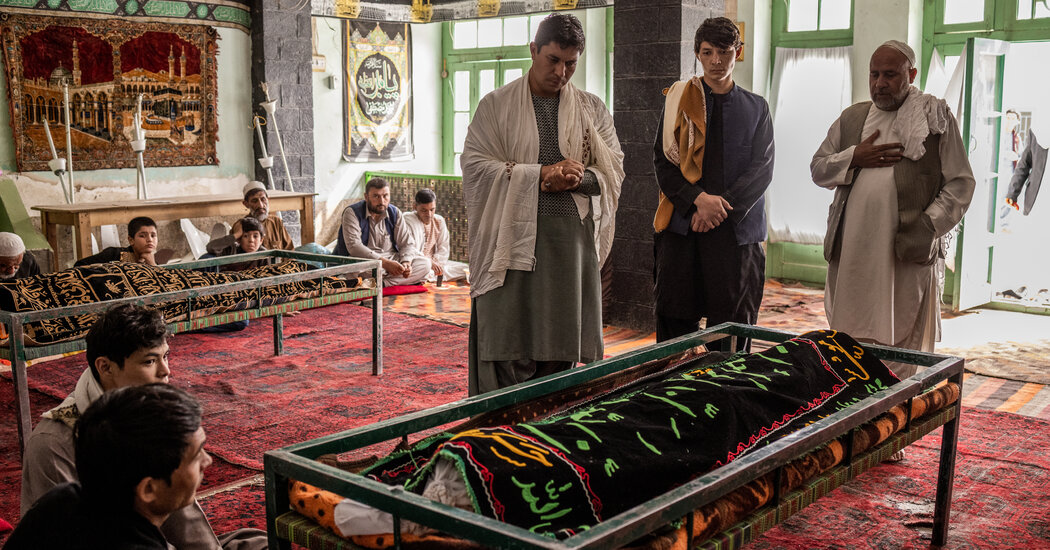 KANDAHAR, Afghanistan – When Masooma Rajabi saw her relatives flock into the family’s patio, she collapsed in the sob.

Her family had gathered there twice over the past two weeks: first to mourn the loss of her husband who had been killed in a suicide attack on a Shiite mosque in northern Afghanistan, and then again after another explosion that was torn through a Shiite mosque in Kandahar, killed her father-in-law and laid shrapnel in the skull of her 15-year-old son Maisam.

She had clung to the hope that Maisam would recover. But now that Masooma saw her husband’s cousins ​​and her mother quietly crying, Masooma knew she had lost him too.

“How is it possible?” asked Masooma, 32, burying his face in his damp scarf.

For decades, violence has raged through Afghanistan’s Shiite community, perpetuated first by the Taliban – who consider Shia heretics – and in recent years by Islamic State Khorasan or ISIS-K.

When the Taliban, hardline Sunni Muslims, took power in August, they promised to end decades of bloodshed and tried to reassure Afghan Shiites that they would not be their target again, as they were under the group’s previous rule from 1996 to 2001. This time, the Taliban given Shiites permission to celebrate Ashura; they deployed a Shiite clergyman to seek out Shiite communities; they visited Shiite mosques to demonstrate solidarity, and they swore that the new government would keep them safe.

But two ISIS-K suicide bombers at mosques in October, which together killed more than 90 people and injured hundreds of others, set off fears that the Taliban would in fact allow the Islamic State’s campaign against Afghan Shia Muslims to disappear unchecked. The attacks also fueled concerns in neighboring Iran, a Shiite Muslim theocracy and self-proclaimed defender of Shiite Muslims around the world, with officials expressing concern over the fate of Afghan Shiites under Taliban rule and the threat of a resurgent ISIS-K attack on Iranian soil.

Now, many Afghan Shiites fear the beginning of a new brutal chapter in which their security depends on the very movement that was once directed against them.

Few understand the devastating new reality more than Masooma and her family. In just two weeks, she and her relatives lost a grandfather, father and son – three generations of Afghan men who spent most of their lives in a country at war but died after the bloodshed was over.

“When the Taliban came to power, we did not expect these things,” Masooma’s brother-in-law, Abdul Raziq Rajabi, 50, said the morning after Maisam’s death. “But I can not say now whether the Taliban will support our people or not.”

After the attack, a restless silence enveloped their neighborhood of brick houses of mud sewn together with narrow alleys and electrical wires dangling overhead. It is one of a handful of Shiite districts in Kandahar, the Pashtun heartland of the country. Some Shiites there are Hazara – an ethnic minority who have been persecuted for centuries – who migrated to the southern city to work or flee violence. Others have lived in the South for hundreds of years.

Masooma’s father-in-law, Haji Nematullah Rajabi, 60, migrated from the central province of Ghazni to Kandahar almost half a century ago and lived a comfortable life in the relative tranquility of the city. He started selling farm equipment, married his wife, Sughra, and eventually had a daughter and two sons.

Ezzatullah Rajabi, 33, the son of Sughra and Nematullah, married Masooma, and they had three sons of their own. They moved to Kunduz, an economic hub in northern Afghanistan. The move made sense to expand the family business, but it scared Ezzatullah’s mother. After the Taliban briefly captured the city in 2015 and 2016, Sughra called every week begging him to return to Kandahar.

Yet when the Taliban began their military offensive last summer, even Ezzatullah was on edge. After the group took power and made public promises to protect Afghan Shiites, who make up 10 to 20 percent of the country’s population, Ezzatullah said his fears disappeared.

So on October 8, an Islamic State suicide attack destroyed the Ezzatullah mosque in Kunduz, killing at least 43 people.

Masooma heard the explosion and sprinted to the mosque, knowing that her husband had gone there to pray. She searched the corpses, which were carried out in bloody scarves, and looked for him. The next morning, Nematullah arrived from Kandahar and found Ezzatullah’s body – his limbs bent like a rag doll – in a hospital morgue. When he saw him, Nematullah almost collapsed.

The family returned to Kandahar to bury Ezzatullah and the following Friday – determined to show his unwavering faith – Nematullah went to his mosque to pray. He called Masooma three times that morning and asked her to send his eldest grandson, Maisam, to him.

Masooma gave in. But around noon. At 1 p.m., she heard another explosion – this time from two suicide bombers that exploded into the mosque during Friday prayers. The explosion left corpses scattered across blood-stained blankets. Dumbfounded survivors streamed out of the building through shattered windows while others searched for their loved ones.

Nematullah’s surviving son, Ahmad Zia, found him among the corpses – his right side was bloody, eyes closed and could barely speak – and then saw Maisam, whose head was wrapped in a bloody scarf. He brought them both to the hospital, where Maisam was put on lifesaving and Nematullah died – one of at least 47 people was killed that day.

The attack on the Bibi Fatima Mosque was ISIS-K’s first in Kandahar, the Taliban’s historic stronghold, and it shocked the Shiite community there. For many, the week after was a blur of funerals and mourning. In a Shiite neighborhood, mourners flocked to a cemetery for bomb victims every day, whispering prayers at the row of fresh graves.

At the cemetery gate, the talk of safety consumed a group of men as they walked around a jug of tea. The new, untested government could not confront the resurgent threat from ISIS-K, some said. Others questioned the Taliban’s stated intentions to protect Afghan Shiites – and even wondered if some Taliban could see the recent attacks as an invitation to kill Shiites freely.

“The Taliban are just saying they are trying to keep us safe, but why should we believe them?” asked Khalil, 36, staring at the graves.

For Shiite community leaders, the implication of the bombing was clear: it was time to take security back into their own hands. Days after the attack, they met with Taliban officials in the mosque – the air still heavy with the smell of charred meat – and demanded that the new government return seized weapons to the approximately 40 Shiite places of worship in Kandahar.

The Taliban agreed to return up to three weapons to each Shiite mosque and offered compensation to families of the bomb victims.

“It is not only the right of the Shia people, but the right of all the people of Kandahar to be safe,” Haji Mullah Abdul Ghafar Mohammadi, 41, the Taliban’s Taliban police chief, said in an interview.

But weeks later, the Taliban had still not returned the weapons – prompting some Shiite leaders to take matters into their own hands.

As men streamed into the Bibi Fatima Mosque the following Friday, two men with Kalashnikov rifles manned the entrance while plainclothes security guards guarded the nearby store counters. Others sat on almost every roof nearby, their bodies bent together and arms aimed at the sidewalk below.

Yet many remained on the edge. In the home of the Rajabi family, Ezzatullah’s brother, Ahmad Zia, planned to go to the mosque, but his mother would not allow it.

“He’s the only son I have left,” his mother, Sughra, said quietly.

He offered her a painful look, Maisam’s condition heavy on his mind. For the past week, the boy had been hospitalized, intubated and unconscious. Eleven relatives had taken turns shifting an old manual oxygen pump to keep him alive.

When Ahmad Zia returned to the hospital that night, the doctors gave him the news he feared: Maisam was brain dead.

The next morning, the family gathered for the now well-rehearsed death ritual. Relatives visited the family home, prayed in the mosque and took Maisam’s body to the cemetery to bury him, right next to his father and grandfather.