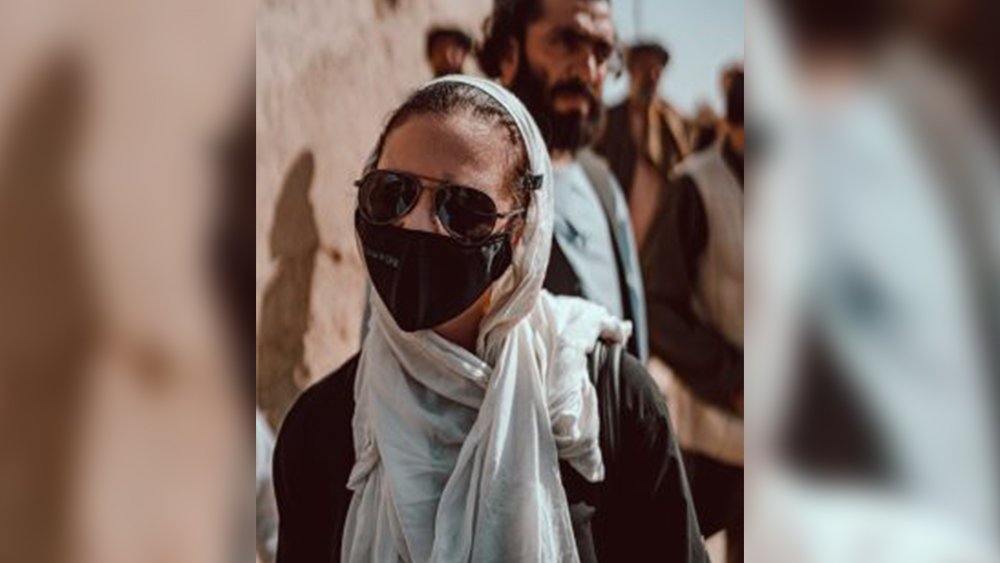 Editor’s note: Hollie McKay’s latest special report for Deadline finds veteran foreign correspondent and Only Cry for the Living: Memories from Inside the ISIS Battlefield author negotiations on the sometimes conflicting new realities for female journalists in Afghanistan since the Taliban’s return to power.

“What are you really doing?” The Taliban commander sifted from inside their police station detention cell last week. “How do I know they are not fake?”

He handed me my press card and the letter of permission issued to me by the Taliban media office – officially called the Islamic Emirate of Afghanistan – which gave me legal permission to continue working in the conflict-torn country that suddenly fell under Taliban control in mid-August.

No matter how frustrated I was growing inside the suffocating room, I took a deep breath and remained calm.

Hours of detention had already passed as more and more senior Taliban security and intelligence officials entered the small interrogation room in Spin Boldak, which borders Pakistan, all armed with US-made M4s and the veiled accusation that my photographer and I definitely had to be spies. It is an unfortunate brand that these days affects almost all journalists who work in sinister places, and one that naturally raises the danger level of the profession.

Eventually, after much altercation and then the coveted permission of the Taliban’s top leaders, we were released back into the wild to continue to cover the rapidly worsening humanitarian crisis unfolding at the international transition.

I realized how many governmental challenges lie ahead for this new regime of mountain warriors who are now swept into leading a country of 38 million almost from one day to the next. I also realized that this experience marked the first time in my month, working behind the Taliban’s lines in Afghanistan, that their officials had treated me exactly the same as my male photographer, Jake Simkin.

These Talibs had seen me dead in the eyes. They had done nothing to protect me from the stress of the situation. It was in itself a quick departure from the newly authorized Taliban I have come to know, which mostly treats girls and women as property along with land or gold or a ladle from a kitchen drawer.

But I think the more women who continue to operate as journalists in this new era, the more we can continue to plant a seed that we do not want and cannot be ignored.

Over the past six weeks, I have spoken to dozens of Taliban members, from the upper echelons of warm sofas in Kabul to the private infantry with floating turbans and kohl-rimmed eyes in dusty, remote villages. I have no qualms about approaching them on the street or in an enclosed office or village mosque. I am almost always the single woman in a room with all the bearded men carrying weapons that some fathers would cradle their child.

When I walk into a meeting, I am rarely ever recognized. Meanwhile, Jake and our fixer, a local named Naweed, who has quickly become part of our close unit, are generally greeted with enthusiasm and guttural greetings on pashto.

Almost all Taliban members do not look at me. If they accidentally make eye contact, they immediately lose their head or turn their gaze away. During an interview, the Taliban interview always politely welcomes me and continues to answer my questions, without looking my way.

I’ve gotten used to this. In just a few short weeks, I adapted to such treatment without protest, as it was the norm for me to continue working as a foreign journalist in the new Emirates. That is perhaps what is most frightening about how quickly I – a person who has long sought to highlight human rights violations around the world – pragmatically accepted my new reality to be heard when appropriate but never seen.

Under the Taliban’s draconian reach, which does not differ much from Afghanistan’s deeply conservative pockets, even through the 20 – year – old US occupation.

There is a strange mixture of pampering that comes with being a working woman in the new – albeit also old – Afghanistan.

A few weeks ago, I visited the reinstated and much-feared ministry of oppression and the spread of virtue. During the last Taliban rule, the department brutally enforced its interpretation of sharia law filled with stoning for infidelity, public executions for murder and cutting off the hand of those convicted of stealing. The upper level has made it clear that these heinous punishments for “greater sins” will return.

I was not allowed to be with my male colleagues inside the inauguration ceremony. Instead, the religious Taliban guards shielded me away inside a private room, constantly bringing me tea and fruit and finally seeing an official. He would only do the interview away from the eyes of the other imams who milled around in the garden, knowing that he would be convicted of talking to a woman.

Nevertheless, I also ventured this week to the dim, small village mosque in the outdated Sang-e-Sar in Kandahar province. It was the single room where Mullah Omar founded the Taliban movement and gathered his troops for the cause back in 1995. It was filled with the most conservative religious leaders defending the legacy of their late founders. Yet they had no trouble sharing bread and even elaborating on me with questions regarding my own views and personal lives, a significant departure from the instructions given to the young Taliban generation that I do not exist of.

There is no one-size-fits-all. In Western media circles, all too often we try to jump across the nuanced realities of a black-and-white image in which all the Taliban are gathered in one.

This meeting came on the heels of the twisted 10-hour journey from Kabul to Kandahar. Such a march was unthinkable just five weeks ago, which was considered one of the most dangerous stretches given the intensity of the fighting between the Taliban and government forces.

We walked through the blown-up army bases in Logar province, which US taxpayers spent billions supporting the Afghan special forces, and then into the infamous crime paradise of Ghazni province, teeming with ancient ruins and raw, pristine ancient neighborhoods that evoke trade on the old Silk Road.

We arrived after dark and the only place to stay was a smelly cluster of rooms with no running water. Powerful Talibs entered the dining area and again never acknowledged my presence. Still, the next morning, after hearing muffled sounds through the strange and sleepless night, I learned that the men had decided to spend the night in a cramped room downstairs, apparently to protect me as a woman who was to sleep in my own area, away from my male driver, fixer and photographer, following cultural customs.

What has also been a remarkable change since the Taliban took power is the obvious lack of security around women. Some Talibs told me that they have been ordered not to stop a car at a checkpoint if there is a woman inside, and this has mostly been true throughout my journey through beautiful, bloody Afghanistan.

A glimpse of me in the back seat is greeted with a nervous bid to keep moving. And of all the official buildings, ministries, and bases I have now crawled through, not once has anyone stopped to search me or my bag. The reasoning is obvious: there are no women working. The days when I was waved to a side room where a female security officer would pat me in the privacy spread immediately when the Taliban seized the full reins in August.

It is in itself a glaring security hole for a nation that has long been devastated by violence and chaos, where groups like ISIS-K, the Afghan affiliate of the brutal terrorist equipment, have been known to disguise suicide bombers as women and use children as human shields.

Moreover, I’m often asked what I’re wearing now, considering that the Taliban enforced harsh dress codes during their previous rule in the 1990s and sent morality police on the streets to whip any offenders who dared to show an ankle, a bare hand, a touch of flesh on their face.

But as it still stands, the emirate has not formed a full parliament and there is no judiciary, which means that a jirga – a team of what will no doubt be all male Islamic scholars – has not yet decided what is acceptable clothing for a woman and if she can publicly expose any part of her body outside her eyes.

Until the cool moment – which can be weeks, months or even years away – I still have what I have always worn in the country I love deeply: a loose dress under my knees, trousers and a simple hijab with a touch of color. If I’m in a particularly uncomfortable situation, such as walking through the Kandahari markets, where the sight of a woman at sunset is confusing to the mob of men, I cover my mouth and nose with a believable Covid mask for my own personal comfort. .

Yet I know full well that I possess a little blue passport that gives me a special status that my Afghan colleagues and friends cannot afford. In Afghanistan, even under the Taliban, as was the case in the former Islamic government and most of the countries where I work throughout the Middle East, the foreign female journalist is considered something of a “third sex”. I do not have a man’s stature, yet I am not necessarily expected to obey every thread of cultural custom and usage imposed on a local woman.

This limbo-like label enables me to cross the two worlds in a unique way, sit with the men, but then have the ability to go and spend time with women in their homes and kitchens and access half of the population that my male colleagues cannot.

But as the weeks go by, more and more of the women I have come to know and love in Afghanistan have disappeared. They have fled to safer shores abroad or have gone into hiding in their damp basements, often change houses safely and have deleted their social media accounts.

The future of girls’ high school education hangs in the unknown void, with the Emirates only announcing that boys and male teachers should return to the classroom. Like the Ministry of Women’s Affairs, which was dissolved last month without explanation, there is no mention of the reopening of girls’ schools. When I pressure the Taliban officials to get answers, I receive vague statements that the classrooms will start again when separate facilities are established and transportation can be guaranteed, away from the eye of the opposite sex.

To end a hectic week, we hit the road again last Saturday and jumped over gaps to the eponymous Sangin district of Helmand province, which supplies about 95 percent of the world’s heroin exports. I sat inside a small mud hut to escape the scorching heat, interviewing a group of weathered poppy farmers and a Taliban passerby sent to follow us from the local governor’s office.

Tea was served in all male rooms. I was not. I resisted the urge to go out as my fixer gently gave me his filled cup. I sipped and looked up, for the first time I noticed a little girl milling at the entrance, staring at me, half-smiling, afraid to enter and already understood that her place should remain in the background.

At that moment, my practical consistency in remaining somewhat of a second class because of my gender quickly fragmented.

We should not and cannot embrace this as the norm.