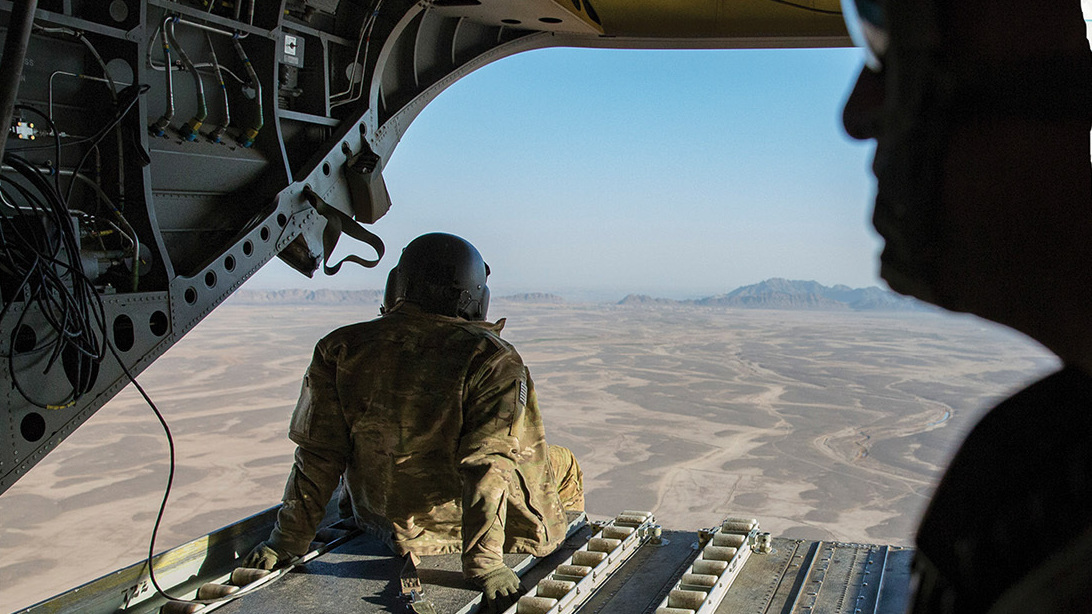 Operation Noble Eagle was launched by the US and Canadian governments in response to the 9/11 attacks. It refers to homeland security operations and support for federal, state and local agencies. Chief Petty Officer Joshua Ives seconded to Afghanistan in October 2012 and served as a senior physician and photographer for the Provincial Reconstruction Team Farah.

Operation Noble Eagle was launched by the US and Canadian governments in response to the 9/11 attacks. It refers to homeland security operations and support for federal, state and local agencies. Chief Petty Officer Joshua Ives seconded to Afghanistan in October 2012 and served as a senior physician and photographer for the Provincial Reconstruction Team Farah.

After 24 years of service in the Navy, Chief Petty Officer Joshua Ives retired in 2015. He reviewed more than 15,000 photographs taken during his time in Afghanistan to make Noble Eagle, a mixed media project that is partly documentary and partly personal reflection.

Ives deployed to Afghanistan in October 2012 and served on a Forward Operating Base (FOB) on the outskirts of Farah with 1,100 crews from the United States, Italy, Slovenia and Afghanistan. As a senior physician on the team, Ives led the base relief station and a team of three naval corps men and two army medics. He also served as a team photographer during his posting, where he documented life at the base and in the local community.

The title of Ives’ photography project refers to Operation Noble Eagle, the name of the military operation launched by the US and Canadian governments in response to 9/11. Each military member deployed to Afghanistan was assigned a Noble Eagle number, a unique identifier used for tracking, indicating the duties, roles, and functions assigned to them.

For Veteran’s Day, NPR spoke with Ives about his military service, the Noble Eagle project, and his reflections on Afghanistan, past and present.

In short, I wanted to go to war because so many of my military brothers and sisters had been, and I did not. When I was posted, I was a non-commissioned officer working at a small Navy medical facility in southern Maine. The United States had been at war in Afghanistan for more than a decade, which was almost half of my career. I did not want to be someone who went his entire career without going to war. I wanted to pull my weight. There is also a certain amount of camaraderie within military circles after people have gone to war, and I wanted that.

Ives included photos from home in his Noble Eagle project because memories of home were an important part of life at the base.

Q: What initially motivated you to enlist in the military?

When I was 20, I lived with my mother in the small town of Cooperstown, NY, where I had grown up. I had at best been a mediocre high school student with no ambitions of going to college and no real sustainable or marketable skills. I had a job as a snowboard instructor at a small ski resort. I did not make much money, but it paid just enough to cover gasoline for my little Ford Escort to and from work.

I had never seriously considered enlisting in the military, but one night, in the middle of the season, someone stole my snowboard. Without it, I needed to figure out another way to live. About the same time, a high school friend returned from Navy Boot Camp. We had not always made the best decisions together, but after 12 weeks of start-up camp, he was a guy who stood tall, with a sense of pride and purpose and direction. I was inspired and motivated to do better. Within a few weeks, I signed up for the Navy and awaited orders to sign up for boot camp. As banal as it sounds, getting my snowboard stolen was a life-changing event.

Q: You were both a doctor and a photographer while you were deployed in Afghanistan. What was it like photographing in these surroundings?

Our primary medical mission was to maintain a base station and provide vital medical support and service to the 1,100 coalitions and Afghan personnel living on FOB. There was a constant stream of victims the whole time I was there – a mass accident event at least weekly.

I was given the task of photographing because the combat camera pilot attached to the Provincial Reconstruction Team Farah was pulled away from the broadcast at the last minute.

It was the best of both worlds as far as I was concerned. FOB life can get pretty boring because you’re trapped inside the thick, dirt-filled Hesco barrier walls day after day after day for months. It was great to break that monotony by getting out of the base and documenting the work of Farah’s leadership and the Afghan people. It was also an incredible opportunity to meet and talk to the locals and get a glimpse of their daily lives.

And everything melted away when I had the camera up to my face. I was very aware of where we were, what we were doing, and that someone might want to kill us. But looking through the lens was strangely relaxing, like being in another world. It probably helped a little to know that I was carrying a rifle and pistol and a lot of ammunition, just like the 10-20 soldiers and sailors around me. But even today, without weapons and ammunition, everything else comes in the back seat when I take pictures. I do not get hungry or thirsty, the cold is less cold, the heat is more tolerable.

Q: What inspired you to do the Noble Eagle photo project?

After I retired, I became a 48-year-old, full-time undergraduate student surrounded by teens and twenty-somethings that I felt I had almost nothing in common except photography. I was suffering from some depression and anxiety and was in a dark place. I felt like an outsider and wanted to comment to my professors and a few other veterans that it was much easier to be sent to Afghanistan than to be in school.

I looked back through the 15,000 images I made during my implementation for a class project. I collected them down to about 25-30 images and put them in a sequence that spoke to my experience, including some that are probably not the stereotypical images that people could expect from war. I also included a few pictures from home because memories from home were an important part of life on FOB.

I had not intended the project to be deeply introspective or even therapeutic, but it turned out to be so. Looking back, it was just what I needed when I switched and adjusted to civilian life because it gave me a chance to revisit my military experience with fresh eyes.

Q: Your work notes give us a glimpse of your daily routine, and the use of poetry feels very reflective. Tell us a little more about life at the base in Farah.

The first note in the project is from a morning leader meeting, which captures the essence of everyday life on FOB quite well: can we use military assets to evacuate the Chief Justice in Farah; suffering from gunshot wound complications; what is the status of the medical incinerator; the team that replaces us starts arriving in five weeks; we have to have pizza tonight.

Pizza nights on Thursdays gave everyone a little taste of home and were a highlight. But it was always important not to become too familiar with your surroundings. Even in the relative safety of FOB, you should always be on guard and try not to fail your guard. For example, when I went for a walk on FOB, I always knew where the nearest ditch or berm or obstacle was if I was going to cover.

At times, it can be emotionally draining. One day we are holding photojournalism training for Afghan women who want to help shape the future of their country; the next day we visit an Afghan displacement camp where it is hard to imagine anyone having a marginally promising future. So the next day we triage and treat wounded and bloody Marines. And then the cycle would start all over again.

Question: Can you talk about a picture from the project that is very important to you?

A picture hanging by me shows the aftermath of treating the injured. I took it to the relief station after spending hours caring for several wounded Afghans – some of whom did not make it. When I went out, people were on their way to the food hall for dinner, going to the gym and just hanging out. I was struck by the reality that no one knew what we had just seen and done. It was just another day on FOB for everyone else.

Q: The United States recently ended its engagement in Afghanistan. What feelings did you have when American troops withdrew?

I can not help but think of the bleak future that awaits so many young boys and girls in Afghanistan. That said, I also think we did a lot of good things and made a positive impact on many individual Afghan lives – so maybe they will be the ones fighting back and eventually making it their own.

I hope that one day the people of Afghanistan can know and experience peace throughout their country.

Joshua Ives recently completed a master’s degree in multimedia, photography and design from the SI Newhouse School of Public Communications at Syracuse University. He lives in Clinton, NY and works as a freelance photographer and photo study assistant. Follow him on Instagram @joshua_r_ives.