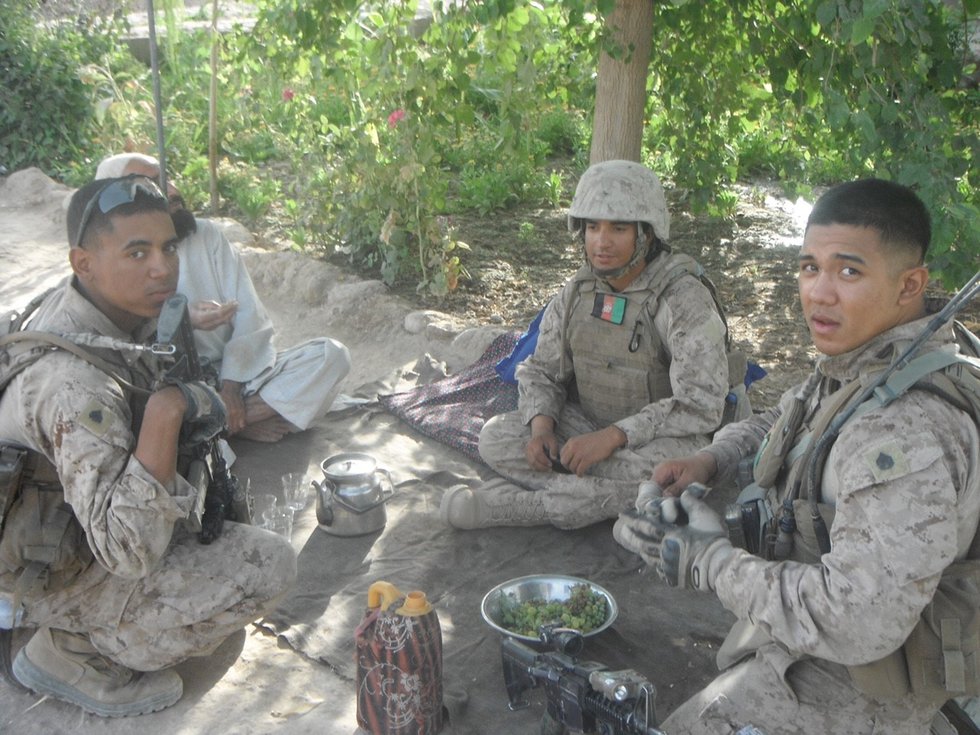 NEW ORLEANS (WVUE) – It’s a long way from the Mississippi Gulf Coast to Afghanistan, where America fought its longest war. When the war ended almost three months ago, a new battle unfolded for a Marine.

He realized he needed to do something when the man who saved his life fell victim to Taliban persecution.

Former Marine Sergeant Moises Espinal of Long Beach, Mississippi, made two nine-month trips to Afghanistan in 2009 and 2011 believing in the mission.

“Almost all school-age boys and girls went to school that we had not seen before,” Espinal said.

He had a budget that was used to build schools and improve water systems, but there was also bloodshed.

“On our second deployment, we lost 17 Marines and had 200 wounded,” Espinal said.

Espinal believes the death toll could have been much worse if it were not for his interpreter, Anil Adnadi, nicknamed Lucky.

Espinal says Lucky helped him communicate and navigate a foreign and hostile land and often fought right next to him and his other Marines.

“Most of these guys have seen five to seven months of serious fighting in some of the most kinetic levels in Afghanistan,” Espinal said.

In August 2021, even though he was home again, Espinal felt he had to start a new fight after absorbing the disappointment of Afghanistan’s fall and the Taliban’s advance in Kabul’s capital.

“It was impossible for them to get through the crowds and get through the gate,” Espinal said. He and a pair of U.S. and British military veterans formed a group called ‘Allied Extract’ to help get hundreds of Afghan interpreters and Americans out of a country facing Taliban persecution.

“They will look through your phone to see if there were any English-speaking messages, and by that time you would either be beaten or they would make you disappear,” Espinal said.

Espinal, a CPA in civilian life, organized a fundraising effort that paid for buses, hotels and safe houses to shepherd dozens of former interpreters and stranded Americans out of Afghanistan.

The original plan was to get them to the main airport, but after the fall of Kabul and the American withdrawal from the airport, the plan changed to free them through the northern part of the country.

“We were able to get 140 people on buses and move them from Kabul over to Mazar Sharif,” Espinal said.

It was no easy task and Espinal says it required payment of bribes almost every step of the way.

“The first checkpoint was like $ 300 for two buses, the second was a little lower,” he said.

While the operation managed to get dozens out, Espinal’s own interpreter ‘Lucky’ was left behind.

“I still had my personal interpreter there and we had to get the ball rolling to get these people out,” he said.

Through a large international network, which included a team inside Afghanistan, ‘Allied Extract’ came up with a plan to get Lucky and his family out through the Afghan northern province, but it was fraught with danger.

“For the longest time, there was no movement,” he said.

But then a bus managed to get to Lucky and pick him up along with his wife and brother.

They finally came out of Afghanistan.

The former interpreter and his family are now safe at a US base in Abu Dhabi.

Although his immediate future is uncertain, Lucky hopes he is lucky enough to eventually return to the United States and would not mind settling on the Gulf Coast not far from the Marine sergeant who helped win his freedom.

“I want to live in a city where my brother Espinal lives,” Lucky told FOX 8.

Although Lucky and his family are now out of Afghanistan, Espinal says there is still work to be done.

“In Kabul, they say women can go to school and go to work, but they do not allow women to go on the streets. As soon as we get the interpreters out, the shift will be to help vulnerable women,” Espinal said.

Espinal says funding for his efforts is running out.

For now, he says, the Taliban persecution is strong. The government promises to bring back executions and amputations.

Espinal is still hoping that one day the seeds that the Americans have planted will take root.

“I hope the kids I saw there have an opportunity to be kids … to go to school and apply for the profession they choose,” Espinal said.

Sgt. Espinal and his group have been able to get more than 200 people out of Afghanistan. He remains committed to an operation to move as many people out as possible to keep them safe. If you would like to help, you can go to their website alliedextract.org.

Do you see a spelling or grammar mistake in our story? click here to report it. Please include the headline.