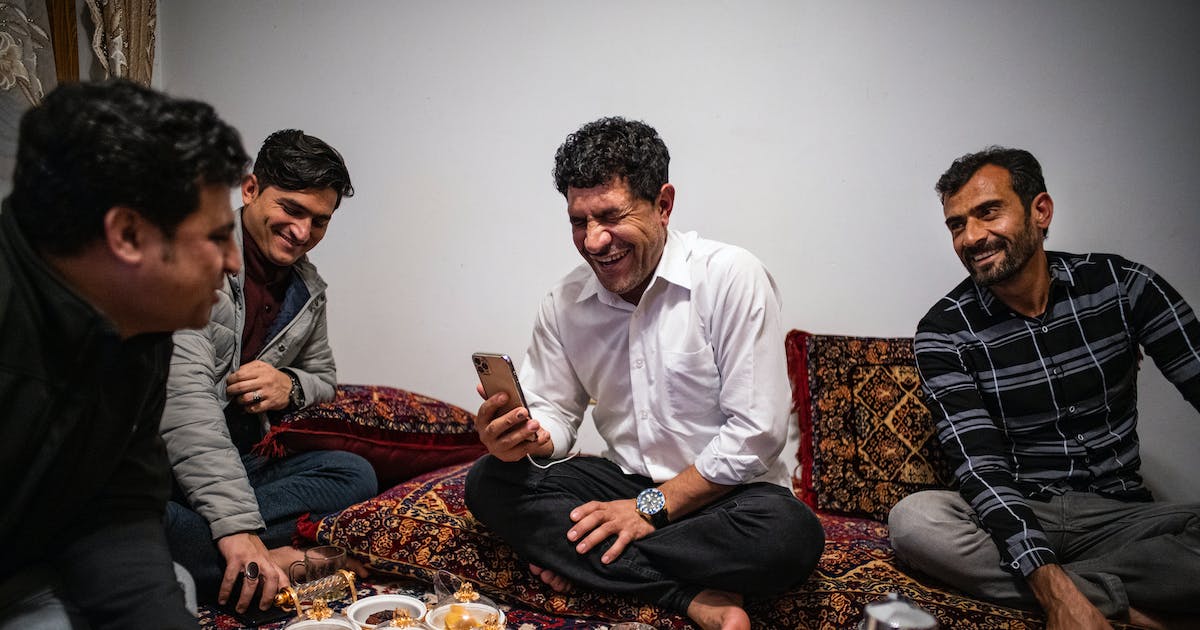 The Afghan men hugged for a long time.

Mirwais Momand had just arrived in Minneapolis-St. Paul airport months after fleeing Kabul, and was finally reunited with his best friend, Sher Mohammad Mulakhail, after three years apart. “It was,” said Momand, “a happy moment.”

Mulakhail did not have much space in the two-bedroom apartment he shared with his wife and six children in Bloomington. But in keeping with Afghan traditions of hospitality, he invited Momand’s family to stay with him during their first few days, creating a new life in Minnesota. They had a lot to say, a lot to plan.

Afghan evacuees like Momand are gradually leaving U.S. military bases for more permanent homes after fleeing their homeland in August when the Taliban returned to power. So far, 359 Afghans have resettled in Minnesota in recent months, and another 280 are expected to arrive soon.

Mulakhail’s eldest daughter, Salma, a high school senior, stayed home to help her mother, Nilofar, make a party for their guests. Momand, his wife and their eight children arrived after 6 p.m. 22, and everyone drank tea and ate meatballs and chicken. They stayed up until 3:30 in the morning. Happy and full, all 18 people from two families fell asleep, mostly on the floor. Eventually, Momand felt at home.

“We are like brothers,” he said in his native Pashto while his friend interpreted.

They worked together as security guards for the US Institute of Peace in Kabul, and their families lived nearby in rural Kunar. The men said goodbye in 2018 when Mulakhail traveled on a special immigrant visa that allows Afghans who served American interests to move here for their safety.

Momand was still working for the institute this summer when the Taliban took control of Afghanistan. The offices closed and he was told to leave the country. “Send my wife and children to Kabul,” he told his father. As the Momanders approached the airport, he feared his family would not find their way out.

“I was worried about my kids and their safety because they were shooting into the air everywhere, but luckily, with God’s help, we were able to reach the airport gate, and I showed my documents, and they locked me in.” Momand told.

They went to Fort Pickett, Virginia, and joined more than 50,000 Afghan evacuees at military installations around the country. Momands arrived only with their documents and a pair of clothes after losing four sacks of luggage during transit.

They received new outfits at the base. Momand’s 11-year-old son Bilal spoke enthusiastically about the camp: He liked cricket games, toys and playing with American soldiers. But it was also so crowded that Momand stood in line for three hours to eat and there was little privacy.

“When are you coming?” Mulakhail kept asking in their daily phone calls. Momand was finally approved to leave the second week of November with a day’s notice, news that brought relief “because it was hard for me to be in camp.”

In the Mulakhail family’s apartment in Bloomington, Bashir Mulakhail, 18, liked having so many people because it reminded him of their old country. Sister Noorina Mulakhail, 11, appreciated having more children to play with, and they played hide-and-seek and made houses out of pillows. Five-year-old Miryam Mulakhail let 7-year-old Asia Momand give her a makeover with lipstick. When Miryam noticed their fathers’ uninterrupted talk, Miryam playfully said, “Blah blah blah blah!”

The morning after Momandar’s arrival, Nilofar’s English teacher, Molly Hauver, came by and impressed with all the people crowded inside. “Is this what it looks like in Afghanistan, a big party?” she asked, smiling.

As they sat on the floor drinking tea, Hauver asked who needed what, noting down the answers on a piece of paper: blankets, shoes, winter coats. She asked them about their sizes and promised to bring donated items soon.

Nilofar took the children out to the playground, and the young Momands pushed each other on the swings and whizzed down the slides before the biting cold made them pile into the car again. Later, Mulakhail’s Momand’s wife and daughters bought dresses at an Indian store. Mulakhail took Momand to the Mall of America, and his friend looked around in amazement.

Hauver delivered pizza from an Afghan-owned store, and the women and children gathered in the living room while a pashto drama was played on television.

Momand’s wife, Zarghona, said along with her friends that she missed her family who were at home. Her 9-month-old daughter Alia has no memories of Afghanistan, but Zarghona will tell her about her grandfather and other relatives there one day. Asked about her hopes for her family here, she said, “A good life.”

Her eldest daughter, Okhkula Momand, nearly 14 years old, said she was sorry the Taliban banned girls from going to school, but here they will be enrolled in the next week or two. She is so talented a tailor that her resettlement agency gives her a sewing machine. She hopes to become a nurse, and her mother dreams of her other children becoming doctors and teachers.

The normally smiling baby started crying. They gave babies cow’s milk in Afghanistan, but Okhkula put some breast milk substitute in a bottle and handed it to his mother to give to Alia. Zarghona stroked the baby’s head and reassured her.

In a back room, a stream of Afghan men streamed in, hugging and shaking hands. Among the friends were several new evacuees; one had just arrived from Fort McCoy, Wis. The men exchanged jokes and played teka, a popular card game in Afghanistan.

Bashir Mulakhail and his father explained American life to Momand. While children may go out alone in Afghanistan, for example, they warned that in the United States they are expected to be accompanied by adults.

Momand was eager to find a job, but had neither a driver’s license, a car, nor knowledge of English. Sher Mohammad Mulakhail planned to ask his boss at Walmart if the store had openings for his friend.

The International Institute of Minnesota, which resettles Momands, was on the run to receive many newcomers at short notice. Federal authorities initially asked the institute to resettle 100 arrivals last week, and the agency reduced the number to 30 and restructured the rest to provide better service.

The agency struggled to find affordable housing for Afghan customers with large families, but managed to secure Momand’s half yellow duplex in St. Petersburg. Paul with four bedrooms and two bathrooms, near a park and playground.

After four nights with Mulakhails, the Momands went to their new home.

“This house is beautiful, of course,” Momand said, looking around. “But it’s hard to leave our country and everything behind it.”

He had built his family home in Kunar out of mud. They made cheese, yogurt and milk from their own cows and ate the crops they harvested. Here their house was made of wood, they had no land to cultivate, and it cost $ 1,600 a month – reduced from $ 2,200 after the landlord found out they were Afghan evacuees.

Mulakhail took Momand along to buy groceries at Walmart and Little India. They filled the fridge with flatbread and halal chicken, the cupboards with spices.

Momand tried to adapt to the sounds of the heater and the clatter of his children’s feet on the wooden floors. He wanted to put the blanket down. One night the wind shook the house so violently that he wondered if an earthquake had hit.

His Afghan-American caseworker worked with him to begin securing food and cash benefits, health insurance, a social security card and a work permit. Momand and his wife were preparing to enroll in English classes, and the family was instructed to make a budget and adapt to American society. A donor to the institute will pay three months of their rent, and the federal government will give them $ 10,000 – a thousand per year. person – in one-off support.

“It will be hard for me to adapt to the culture here, but slowly … we will learn,” Momand said. “We will continue our lives to be on our own two feet and live happily.”