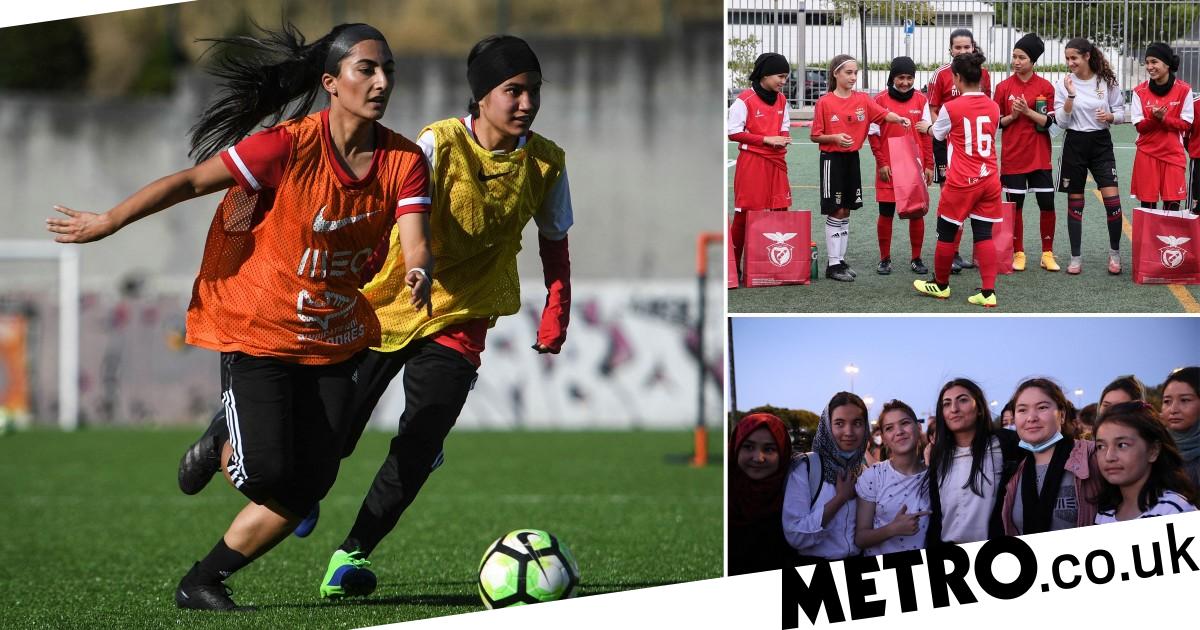 The Afghan youth football team is finally on its way to a sanctuary in Britain after more than a month in Pakistan.

The group of 132, including 32 teenage players, their families and other staff, had become stuck in limbo after fleeing their home in August.

They flew out of Islamabad this afternoon to be moved to the UK, where they will be backed by Leeds United, who have said they will find all the girls’ places in their youth development team.

Kashif Siddiqi, a London-born footballer who played for Pakistan’s international team, has spearheaded the campaign to get the squad and their loved ones over to the UK.

He said: ‘This has been a long 90 minutes plus break time.

‘I am so relieved that, in collaboration with our partners, the Government of Pakistan and the United Kingdom, we have all scored the winning goal and are bringing the girls home to football.

‘My mother’s struggle and flight from Africa to Britain taught me how important it is for society to come together in times of crisis.’

The team must arrive at Stansted on Thursday before being driven to hotels in Yorkshire, Metro.co.uk understands.

The flight covers a four-month journey after the Taliban came to power in their home country, where the militants have quickly curtailed the freedom of women and girls.

The ROKiT Foundation, a community interest group that also supports the group’s relocation, had warned that they were in a ‘life-threatening position if they were to stay in Afghanistan’.

The refugees, whose youngest player is 12 years old, originally left their homes in hopes of a safe haven abroad and hid in a hostel in Kabul after the city fell to the Taliban in August.

The devastating suicide bombing at the capital’s airport prevented attempts to fly them out before the coalition’s departure.

They were then given 30-day visas to Pakistan after Mr. Siddiqi and Jonathan Kendrick, chairman and co-founder of the ROKiT Group of Companies, intervened and provided financing and insurance.

In a letter to the country’s Prime Minister, Imran Khan, they said: ‘Your life-saving intervention for these young female footballers in this moment of crisis is a testament to Pakistan’s generosity and its status as a great friend of global sport.’

Traveling in small groups, the refugees made their way across the border, where an anxious wait to find out if they would be resettled in Britain has stalled.

A lifeline came when Leeds chairman Andrea Radrizzani said the club could find places in its youth and was ready to ‘give the girls a prosperous and peaceful future’.

The group also wrote to Boris Johnson asking for a visa, saying each player will be supported by the Premier League team.

The development team is primarily for underprivileged girls and differs from the youth team, which has been allocated a sanctuary in Portugal. Afghanistan’s senior women’s soccer team was evacuated by Australia.

Siddiqi, who co-founded the Global Football for Peace movement, has been in Pakistan for two weeks to assist the resettlement and will return to meetings with ministers.

The Taliban’s exclusively male administration has curtailed the freedom of women and girls in sports, work and education, with reports of activists being beaten, hunted down and intimidated.

Bloody reprisals against those who represented relative freedoms and Western cooperation before the regime returned to power on 15 August are also said to have been carried out.

After the mass air bridge, called Operation Pitting, 11,000 Afghans are in hotels waiting for permanent homes, according to the government.

The refugees have been given access to the United Kingdom through roads, including the Afghan Relocation Assistance Policy.

In September, it was reported that development actors and the wider group had been granted visas to come to the UK.

The Interior Ministry told Metro.co.uk it could not comment on individual cases or the nature of the group’s resettlement status.

For more stories like this, check out our news page

Get the latest news you need to know, feel-good stories, analytics and more