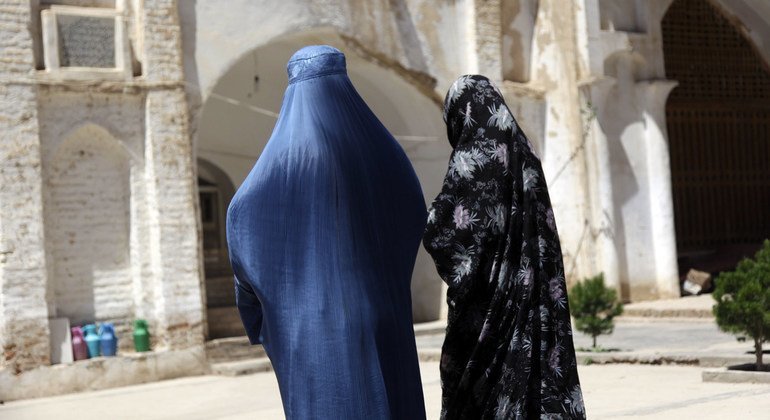 Leading the $ 606 million appeal in Geneva to support emergency aid to 11 million people across the country, António Guterres said that even before the uncertainty caused by the Taliban’s takeover last month, people were gripped by one of the worst crises in world.

The people of Afghanistan are facing a humanitarian catastrophe.

This is the time for the international community to extend a lifeline and do everything we can – and everything we owe – to help them hold on to hope. https://t.co/ZX1koiribx

“The people of Afghanistan need a lifeline,” he said. “After decades of war, suffering and insecurity, they are facing perhaps their most dangerous hour. Now is the time for the international community to stand with them.”

Sir. Guterre’s highlighted concerns about humanitarian access as needs dramatically increase, insisting that the country’s new rulers had promised their cooperation “to ensure assistance to the people of Afghanistan. Our staff and all aid workers must be allowed to carry out their vital work in safety – without harassment, intimidation or fear. “

One in three Afghans does not know where their next meal is coming from, the UN chief explained, adding that “many people can run out of food by the end of the month, just as winter is approaching”.

Speaking at the conference, the UNICEF Executive Director, Henrietta Fore, emphasized the desperate situation of many Afghans.

“Nearly 600,000 people – more than half of whom are children – have been displaced by conflict this year,” she said.

“The number of unaccompanied and separated children is increasing and we have received informal reports of child recruitment by the parties to the conflict and are concerned that children may be at increased risk of experiencing other serious violations of their rights.”

Rights concerns in the spotlight

The rapid appeal for food, life-saving interventions and essential health care – including maternal health care – comes amid deep concern that women’s rights are being threatened by Afghanistan’s new rulers.

The High Commissioner for Human Rights, Michelle Bachelet, addressed the Human Rights Council in Geneva on Monday, underlining the scale of the humanitarian and economic crisis in Afghanistan.

It had come in “a new and dangerous phase”, she maintained, while many Afghans were also “deeply concerned about their human rights, especially women, ethnic and religious communities”.

Ms. Bachelet’s comments followed a warning from her office, OHCHR, that whips, batons and sharp ammunition have been used on peaceful protesters in the past week.

Unauthorized gatherings have been banned and telecommunications companies have been asked to disconnect the internet on mobile phones in specific areas of Kabul, the OHCHR warned last Friday.

Addressing these concerns at the Geneva High-Level Conference, the UN Secretary-General highlighted the need for food, life-saving interventions and essential health care for the people of Afghanistan.

And he insisted that “robust mechanisms” were in place to coordinate humanitarian efforts rooted in human rights.

Insurances from the Taliban

In response to the UN’s determination to “stand by” the people of Afghanistan and protect “hard-won gains” for the country’s people over the past 20 years, UN Chief of Staff Martin Griffiths noted that he had received written assurances from the Taliban leadership to allow emergency relief efforts to continue;.

These guarantees followed his meeting with the Taliban’s interim leaders in Kabul last week, in which he called on the country’s new rulers to respect human rights and facilitate access to aid.

Women and girls should have access to education, including rights and services “like everywhere else in the world”, Mr Griffiths insisted, before revealing that the Taliban’s written commitment included removing “current and past barriers” to UN humanitarian projects.

Aid workers would also be protected by the Taliban, as would the sanctity of UN premises, the UN relief chief explained, adding that they agreed on women’s rights and freedom of expression in accordance with the country’s religious and cultural values.

In a speech from Kabul, the UN High Commissioner for Refugees, Filippo Grandi, emphasized the high level of need among Afghanistan’s 3.5 million displaced people and the potential for even greater suffering.

“Looking at it from the perspective of the current crisis, I fear that the collapse of services, and that the economy that has already been described as a risk, combined perhaps with increased violence and tension, could lead to a much greater shift. , internally and externally, and it can happen very soon. “

If funding is received soon, it could be used to scale up aid to vulnerable Afghans displaced outside the country, Mr. Grandi and highlighted the need for financial support for vaccination campaigns and resettlement programs.

Protection of women and girls

As part of the broader Afghanistan appeal, the United Nations Population Fund (UNFPA) is seeking nearly $ 30 million to meet the urgent needs of Afghanistan’s women and girls.

The funding will be used to meet the reproductive health and protection needs of some 1.6 million vulnerable women and girls across the country.

During a speech to the conference, UNFPA Executive Director Natalia Kanem insisted that Afghan women and girls should not be left behind.

“My message today is: we must stand strong and stand together to protect the fundamental rights, freedoms and lives of Afghan women and girls and not allow 20 years of hard-won gains to be eroded before their eyes.” she said.

“Neither religious belief nor politics should ever be used to justify curtailing women’s full participation in all aspects of society.”

UNFPA continues to provide services amid the current crises plaguing the country, through 200 family health centers and shelters.

The political unrest and continued volatility, combined with a suspension in international donor funding, have disrupted access to lifesaving health care, the agency said, warning that further reductions in support for education, health and social services would have devastating consequences.

For the United Nations World Food Program (WFP), the current crisis has its roots in decades of conflict and lack of development resilience.

Save livelihoods in the countryside

Similarly, the head of the United Nations Food and Agriculture Organization (FAO) has stressed the urgent need to secure rural livelihoods and avoid massive displacement.

“The window of opportunity to help Afghan farmers before winter is very narrow. It is vital that support is scaled up and accelerated immediately. Without emergency and rapid assistance, farmers will miss out on this crucial planting season, which has just begun.” Mr. Qu stated.

The FAO is seeking $ 36 million to accelerate support for farmers and ensure they do not miss the upcoming winter wheat planting season.

About 3.5 million Afghans who depend on agriculture for their income will also be helped until the end of the year.

More updates on this story will come later.