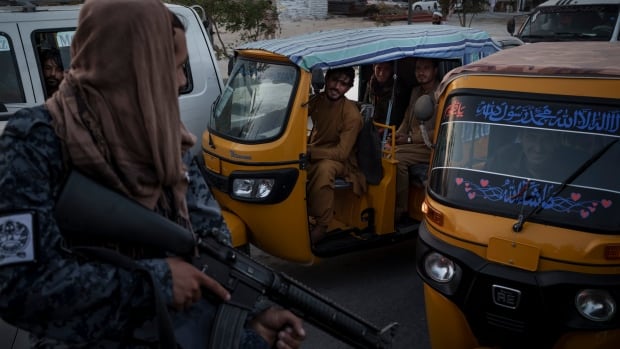 The last few weeks should have been among the happiest in Safia’s life. She was supposed to be a new bride now, on her way to a new life.

Instead, Afghanistan’s collapse and the detention in Tajikistan of her fiancé, a former pilot in the Afghan Air Force, have turned her dream into an ongoing nightmare.

Safia, a Canadian citizen of Afghan origin, told her story to CBC News on the condition that she was identified only by a pseudonym to protect her relatives and those of her fiancé who are still trapped in Afghanistan under Taliban rule.

Their wedding was scheduled for the first week of September in Afghanistan. The couple had completed a long-distance relationship after meeting in the United Arab Emirates just before the pandemic. She had planned to sponsor him to become a Canadian citizen after his military service ended.

“I was terrified,” she said, describing the day Kabul fell. “I kept sending messages that day back and forth and calling.”

Her fiancé tried to reassure her by saying the U.S. military would evacuate the Afghan pilots. These pilots had been the target of a Taliban assassination campaign all summer, and there was every reason to believe that those captured in the wake of the government collapse would be slaughtered.

It was pure luck that Safia’s fiancé was still at the military air base in Kabul on the day the government fell. He was free and should have been home.

Instead, he and dozens of other pilots and ground crew staged a desperate last-minute escape and fled the capital in their plane on August 15th. Hundreds of former Afghan air force members reached Uzbekistan and Tajikistan.

Safia, who was used to receiving daily text messages and chats from her fiancé, was suddenly faced with an ominous silence.

“I did not know what was happening,” she said. “I was scared of him and had no idea what had happened to him.”

Her fears only got bigger when she saw the horrific images of Afghans clinging to the wheels of departing American transport planes and falling to their deaths.

“My family comforted me and told me it would be okay, but I had so many different thoughts through my head,” she said.

“I will never forget that night. It was probably the scariest night of my life.”

Eventually, she discovered that he had reached Tajikistan. This led to hectic efforts to get in touch with him and put his and the other internal pilots’ situation before the Canadian government.

Some of the pilots managed to avoid having their phones confiscated by Tajik intelligence and border authorities. The young couple was able to connect through a borrowed device.

“The first time we talked, it was such a relief. I think I talked less and cried more,” Safia said.

CBC News has chosen not to identify her fiancé because of his detention near the Tajik capital Dushanbe and the risk that he and the other detained pilots could be extradited to the Taliban. His identity has been verified separately through the U.S. military training journal.

CBC News was the first to report on the daring escape of over a dozen former Afghan military pilots and their request for asylum in Canada.

Safia has furiously emailed and called several federal departments and international agencies, including the UN Commission on Human Rights.

‘I expected so much more’ from Ottawa

She said Prime Minister Justin Trudeau’s office told her it was an immigration case, while Immigration Canada said her fiancé did not qualify under the special resettlement program introduced in late July for Afghans who had a direct relationship. to Canada’s previous mission in Afghanistan.

“Of course he does not fall under it, but that does not mean that Canada should not help. Canada should also respond to this,” said Safia, adding that she is deeply disappointed by the response from her government.

“I expected so much more from them.”

Another immigration measure introduced by the Liberal government – which aims to bring up to 40,000 vulnerable Afghan refugees to Canada – could be an option for her fiancé. But he remains in Tajik custody with no internet access and no way to apply.

Safia is not the only Canadian connected to the stranded pilots. The uncle of another pilot spoke to CBC News last month. He said he has also struggled to get the attention of Canadian officials since the crisis broke out.

A group of US veterans who have teamed up to lobby Congress and the State Department to help Afghan military pilots have been in contact with the men on a daily basis in various ways.

Former US Air Force Brigadier General Dave Hicks led the military air training mission in Kabul in 2017 and is part of the non-profit group OpSacredPromise, which seeks to help resettle former Afghan Air Force personnel. He said it has been a long, tough road for the in-house pilots over the last many months and their morale is low.

Hicks said efforts to free the leaflets from Tajikistan have been more complicated at the diplomatic level.

“There have been times when we were a little hopeful, only to be disappointed more than once,” Hicks told CBC News. “It’s the kind of situation where we have to let diplomacy play itself out.”