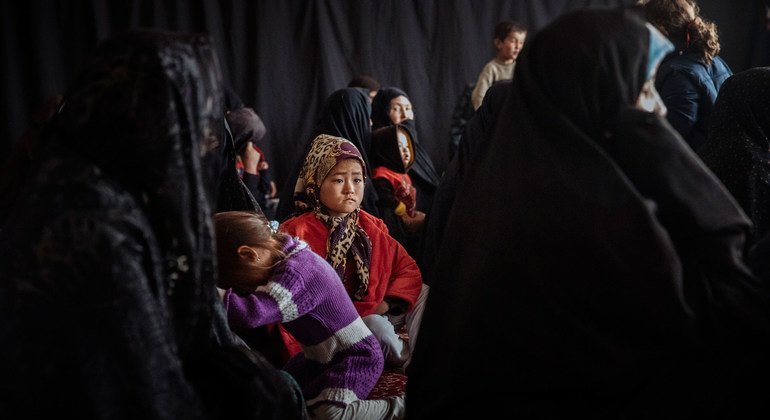 Thirteen of the 15 ambassadors voted in favor of the resolution, which further demands that Afghanistan not be used as a shelter for terrorism.

Countries strongly condemned the deadly explosions at Kabul airport on Thursday, which killed more than 150 people and injured up to 200 more. The Islamic State terrorist group in Khorosan province (ISKP) took responsibility.

The attack was aimed at people fleeing Afghanistan in the wake of the Taliban’s takeover two weeks ago, and international forces assisting the evacuations.

Thousands of Afghans have attempted to flee the country ahead of the US full withdrawal within its self-imposed Tuesday deadline.

Ambassador Linda Thomas-Greenfield from the United States speaks at the Security Council meeting on the situation in Afghanistan.

USA: Live up to commitment

The resolution was tabled by the United States together with the permanent members of the Council, France and the United Kingdom.

“The Security Council expects the Taliban to live up to its commitment to facilitate safe passage for Afghans and foreign nationals seeking to leave Afghanistan, whether today, tomorrow or after 31 August,” said US Ambassador Linda Thomas-Greenfield.

“In accordance with the right to leave any country, including its own, everyone must be allowed to leave Afghanistan safely, for whatever reason, by plane or land. It is of the utmost importance to us.”

Since July, the United States has evacuated more than 122,000 Americans, foreign nationals and vulnerable Afghan nationals, she reported. Ms. Thomas-Greenfield added that the resolution also reflects the Council’s “crystal clear” commitment to help those who remain in Afghanistan.

“It emphasizes that all parties need to facilitate humanitarian assistance and that humanitarian actors are given full safe and unhindered access to continue providing services to those in need,” she said.

France: Well everyone in need

The resolution notes a Taliban statement this week that allows Afghans to leave the country at any time. Nathalie Estival-Broadhurst, France’s Deputy Permanent Representative, called for this commitment to be maintained.

“This resolution calls on everyone to do everything possible to secure the airport and the surrounding area,” she said, speaking through an interpreter.

“And to create this safe passage and protection is one sine qua non condition to ensure that endangered Afghans who want to travel can do so safely, but also to ensure that humanitarian aid can reach all those who need it, of course through the airport, but also across national borders. “

Ambassador Barbara Woodward from the UK speaks at the Security Council meeting on the situation in Afghanistan.

She described the resolution as an important step towards an overall international response to the situation in Afghanistan.

“We will continue to build on this to ensure that the Council holds the Taliban accountable for its obligations. The Taliban will be judged by the international community on the basis of their actions on the ground, not their words,” she said.

In explaining her vote, Ambassador Vassily Nebenzia said Russia was forced to abstain because certain “concerns in principle” were not reflected in the draft text, which was broadcast on Friday.

Ambassador Vassily Nebenzia from the Russian Federation speaks at the Security Council meeting on the situation in Afghanistan.

“Firstly, despite the resolution being proposed in the wake of a horrific terrorist attack, the authors categorically refused to refer to a passage on the fight against terrorism involving internationally recognized terrorist organizations ISIL and the Eastern Turkish Islamic Movement,” he said. , speaks through an interpreter.

“We see this as a reluctance to acknowledge the obvious and a desire to divide terrorists into ‘ours’ and ‘theirs’; and that is to say, to downplay the terrorist threat from these groups. “

Ambassador Geng Shuang from China stated that given the fragile situation on the ground and the uncertainty, any action taken by the Council should help ease the tensions and not intensify them.

Ambassador Geng Shuang from China speaks at the Security Council meeting on the situation in Afghanistan.

“The recent chaos in Afghanistan is directly related to the hasty and disorderly withdrawal of foreign troops,” he said. “We hope that relevant countries will realize that withdrawal is not the end of responsibility, but the beginning of reflection and correction.”