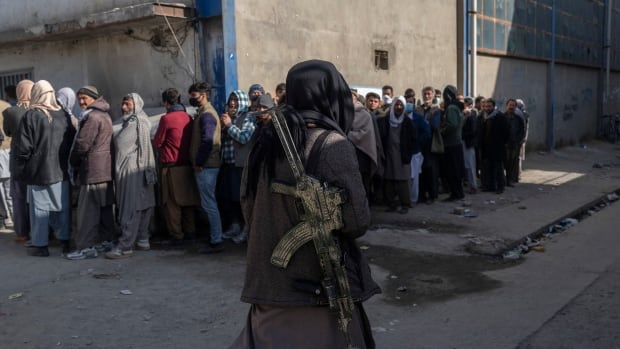 Afghanistan is facing a looming humanitarian crisis as aid organizations struggle with ways to pay doctors, nurses and others because there is currently no way to transfer salaries to bank accounts there, the head of the International Committee of the Red Cross said.

ICRC President Peter Maurer’s comments repeat those of the UN Special Representative for Afghanistan, who this week warned that the country is “on the brink of a humanitarian catastrophe” and that its collapsing economy increases the risk of extremism.

The country’s economy is estimated to have fallen by 40 percent since the Taliban took control in August.

The Geneva-based ICRC, which has been operating in Afghanistan for over 30 years, temporarily carries money bags into the poor nation and converts dollars into the local currency to pay some of its staff.

The ICRC has been able to do this with regulatory approval from the U.S. Treasury Department for control of foreign assets. The ICRC also has an agreement with the Taliban-run Ministry of Health that allows donor-funded payments to pass through the ICRC and bypass the Taliban, which has not yet been officially recognized by any nation.

“The main problem in Afghanistan is not hunger. The main problem is the lack of cash to pay wages to provide social services, which has existed before,” Maurer told The Associated Press in an interview Thursday during a visit to Dubai.

“Let us not forget that most of these doctors, nurses, operators of water systems and electrical systems are still the same people. It is the management that has changed, but not these people.”

Afghanistan’s aid – dependent economy was plunged into deep unrest following the Taliban’s takeover of the capital Kabul in August and the collapse of the US-backed Afghan government a few weeks before the United States withdrew its last troops.

Bank transfers are not an option

The Taliban leadership, which recently banned all foreign exchange transactions, has called on the US Congress to ease sanctions and release Afghanistan’s overseas assets so that the government can pay teachers, doctors and other public sector employees.

Following the Taliban’s takeover, the United States froze nearly $ 9.5 billion in assets of the Afghan central bank and halted shipments of cash.

Since the Taliban took power last summer, it has not been possible for international aid organizations to transfer payments to accounts in Afghanistan, as international currency cannot currently be converted into local currency by a network of banks in the country.

Maurer said humanitarian organizations could not “fix an implosion of an entire country.” He said that what is needed is an agreement on a sufficient injection of liquidity – something he believes is possible without formally recognizing the Taliban.

The ICRC’s budget until mid-2022 has increased from $ 95 million to approx. $ 163 million to meet Afghanistan’s growing urgency.

Hunger is just one of the many problems that millions face in the country. The World Food Program has warned that nearly 9 million people in Afghanistan are at risk of being exposed to “famine-like conditions”. A further 14.1 million suffer from acute food insecurity.

Maurer said the country could slip into a famine crisis if the drought affects food production and if the economic downturn continues, but stressed that the immediate crisis facing Afghanistan continues to pay wages to maintain basic services functioning.

“People who don’t get enough food get sick,” Maurer said. “If the health system is not able to deal with the fragility of health, then it is again a problem. So I am concerned about the link between food, health, water, sanitation, electricity and education system.”

The Swiss-born former diplomat traveled to Kandahar and other areas of Afghanistan in early September, just days after the US withdrawal. During that visit, he met with one of the top Taliban leaders, Mullah Abdul Ghani Baradar.

The ICRC says Maurer’s visit and meeting with Baradar reflects the aid organization’s principle of neutrality and was intended to send a clear message that the group would continue to provide services to those in need on the ground, regardless of who is in power.