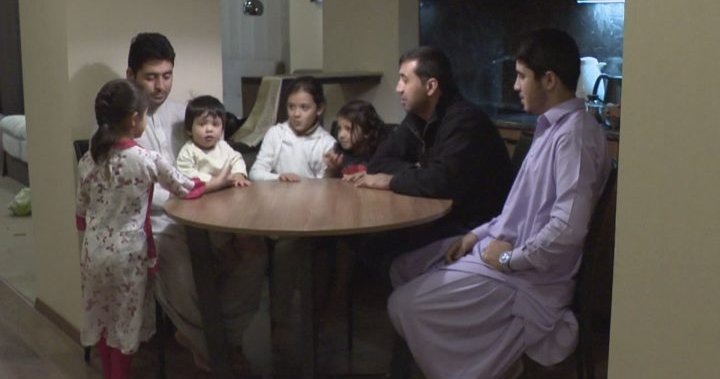 An Afghan family who fled Kabul when the Taliban took over the country in August has been stuck in Ukraine for more than a month while waiting for Canadian immigration authorities to process their papers.

Jawed Ahmad Haqmal – a former interpreter for the Canadian Armed Forces – and his 11 relatives, including five children, were part of a large group evacuated by Ukrainian soldiers.

Canada to open talks with the Taliban to bring back citizens, Afghans: Garneau

Since landing in Kiev on August 28, they have been staying at a hotel paid for by Globe and Mail, whose reporter Mark MacKinnon helped the family’s dramatic escape hours after two deadly suicide attacks outside Kabul’s Hamid Karzai International Airport.

The Kandahar family is now in limbo with no end in sight.

Haqmal is becoming impatient, frustrated and worried about his family’s well-being.

2:43
Canada pressured to act to help Afghan interpreter and family stuck in Ukraine

“We are crushed. We are really hopeless, “the 33-year-old told Global News.

“We are like prisoners staying at this hotel,” he said. “I do not know how long I will wait any longer. ”

It has been a long ordeal for the family who fled to Kabul back in July when the Taliban made progress in encircling their hometown of Kandahar, Afghanistan’s second largest city.

As part of their advocacy efforts to help Afghans obtain asylum in Canada, staff members of a Liberal parliamentary office helped raise funds to get Haqmal and his family out of Kandahar and into a security house in Kabul.

In early August, Haqmal said he had completed his biometrics at the Canadian Embassy in the capital. He has already received facilitation letters from Immigration, Refugees and Citizenship Canada (IRCC) for all his family members, including health insurance documents and ID numbers.

Yet there is still nothing to be said about when they would be able to set foot in Canada.

Canada has pledged to resettle 40,000 refugees from Afghanistan. So far, about 2,400 Afghan refugees have arrived in the country.

In July, the federal government unveiled a new, accelerated “path to protection” for Afghans who supported Canadian troops as interpreters, cultural advisers or support staff, as well as their families.

But the plan to resettle Afghan interpreters has been plagued by problems, delays and controversy as thousands like Haqmal continue to wait in Afghanistan or a third country.

Robert St. Aubin, who helped advocate and raise funds for Haqmal while working as an employee of Marcus Powlowski, a Liberal MP for Thunder Bay-Rainy River, said there is a lack of transparency and accountability from IRCC officials.

“One of the biggest problems is that the immigration department is so opaque that it’s just not clear what’s going on,” he told Global News.

“We are in the system, and yet there seems to be no real accountability to the democratically elected government when it comes to these officials.”

While Haqmal and his family were able to escape Afghanistan, St. Aubin that he is also in contact with other families still stuck in Kabul. Others are waiting in Islamabad.

In an email response to Global News on Tuesday, Peter Liang, a spokesman for the IRCC, said that the absence of stable conditions and the ever-changing circumstances surrounding what exit documentation is required at checkpoints and international crossings to third countries have done so. ” extremely difficult ”to get Afghan refugees out safely.

“We continue to work closely with international and regional partners to expand these operations. And we are also working with a number of domestic advocacy groups, including veterans,” Liang added.

7:07
Has the Taliban changed ?: Former ambassador for Afghanistan’s future

Has the Taliban changed ?: Former Ambassador for Afghanistan’s Future – October 9, 2021

Jeremie Verville, a former member of the Canadian Armed Forces, first met Haqmal in Kandahar while serving as division commander back in 2009, and has kept in touch since then.

He said he has tried to call the IRCC to get some answers on his immigration status, but without success. He is now trying to complete the necessary paperwork to act as a representative of the family and pursue his case.

Afghan refugees grateful to settle in ‘bright future’ in Calgary

“It’s been a hell of a trip for him to get out because he followed all the requirements,” Verville told Global News.

But Verville is hopeful and optimistic.

“What I’re trying to tell him pretty much daily (is) ‘man, you’m sure … bureaucracy is sometimes long, but at least you do not have to flee for your life anymore’.”

While he waits, health is a major concern for Haqmal, who lives with a kidney and has been taking medication to treat depression for the past two years.

His mother, in her 70s, is a diabetic. Finding over-the-counter medication has been a struggle, he says.

After a bloody 20-year war, what’s next for Afghanistan?

Despite some financial assistance from Canadian military leaders in both Ukraine and Canada, the family is short of money.

“Many times my mother cries, my wife cries it in what situation we are in. How long… will we wait in this situation?”