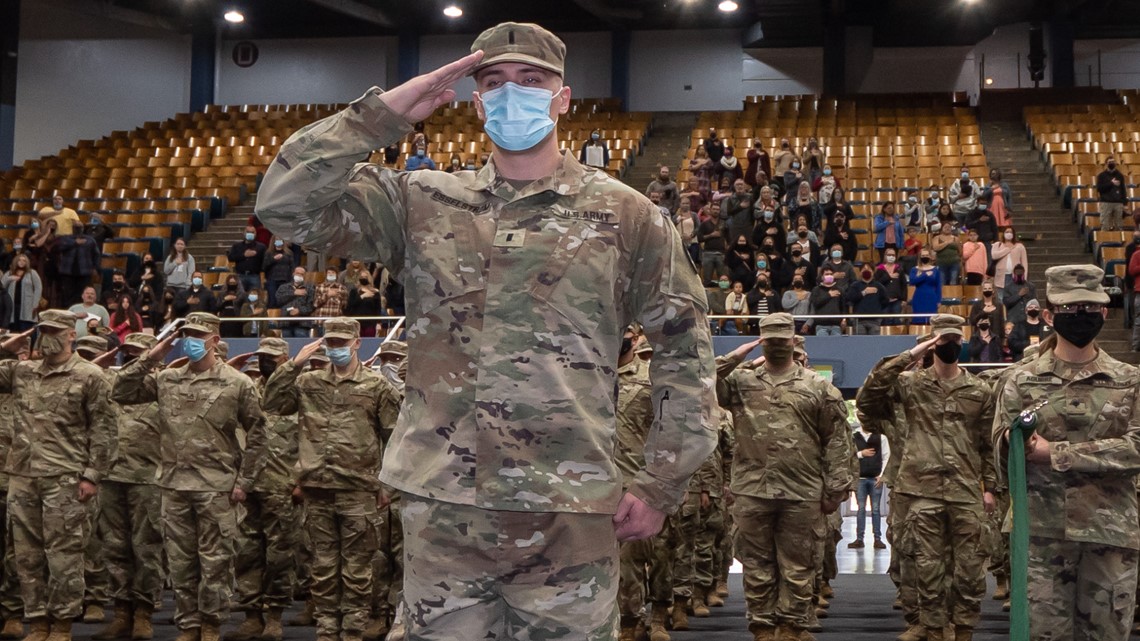 Soldiers said it has been challenging but exciting to help the Afghan refugees as they settle in a new country.

The soldiers are stationed at Camp Atterbury, just south of Indianapolis. It covers 46,000 acres and can accommodate as many as 10,000 soldiers. Instead, it now houses 5,000 refugees from Afghanistan, almost half of them under the age of 18.

First Lieutenant Alex Esselstrom from Bend, Ore. is head of the 1186th Military Police Company, now stationed at the base.

“We have a lot of soldiers performing foot patrols,” Esselstrom said. “And they are certainly immersed in the Afghan people. Especially the children. They are very fascinated by everything we do.”

In his civilian life, Esselstrom is a police officer in Bend. At Camp Atterbury, his team protects the perimeter of the base – manning sentries, making sure no unauthorized people enter and no smuggled goods are smuggled in. He said it has been so far, so good.

“It has been slow. We are really law enforcement here at the post. We are grateful that things have been quiet, to be honest,” he said.

The camp is one of eight in the United States that began accepting refugees after the president ordered massive airlifts in August.

Most are men and women who worked for the United States during the long war in Afghanistan, along with their families.

One of the camp leaders, Colonel Dale Jackson, said many dreamed of a bright future for themselves and their families.

“And then all of a sudden it ended,” Jackson said. “And they were displaced quickly and violently from that dream. So there is a lot of mental and emotional and spiritual that they work through and have to keep working through. And they arrived here, and now they are doing soul searching, dealing with that pain, it handles the trauma, but also looks forward to trying to figure out now, ‘What is my new dream?’

RELATED: Space Station Threatened by Waste After Russia Destroys Its Own Satellite

One of their new nightmares is an attack on the extended family still in Afghanistan, according to Aaron Batt, the civilian responsible for the resettlement efforts at Camp Atterbury.

“Many of them fear persecution for them and their family,” Batt said. “Almost everyone has family who have been left behind in Afghanistan, and we want to make sure, of course, that their face does not end up endangering them.”

Five thousand are many people with many needs. Some of them are overseen by 1st Lieutenant Kara Lerwick and her Oregon Guard Company.

“So it’s the humanitarian part of it that’s really satisfying for us because we’re seeing the happy ending,” she said.

The refugees are accommodated in blocks of rooms. Lerwick and her soldiers with the 224. Engineering firm fills a role called a mayoral cell.

They deal daily with the refugees in a particular block of buildings and help them get what they need, from clothes to food to repairing something that is broken inside their rooms.

Lerwick’s conversations have led to some fun moments.

“I’m guessing they had a class on road laws and driving laws and driving licenses and all that, and you know we’re talking about our different perspectives on that – and they say – ‘Oh, you have a speed limit everywhere!’ And it’s like yes – yes we do. “

She said it is rewarding to help on a historic mission.

“It feels good. Even on our longer days to go out there and watch the kids receive coats or play football or get the guests to tell us that they appreciate what we do out here, and they often do,” she said.

Camp leaders say it can take as long as a year to place everyone in a new home. The Oregon soldiers will be there to help until August or September 2022.

Do you have a comment or a story idea for Pat Dooris? Send him an email at [email protected]