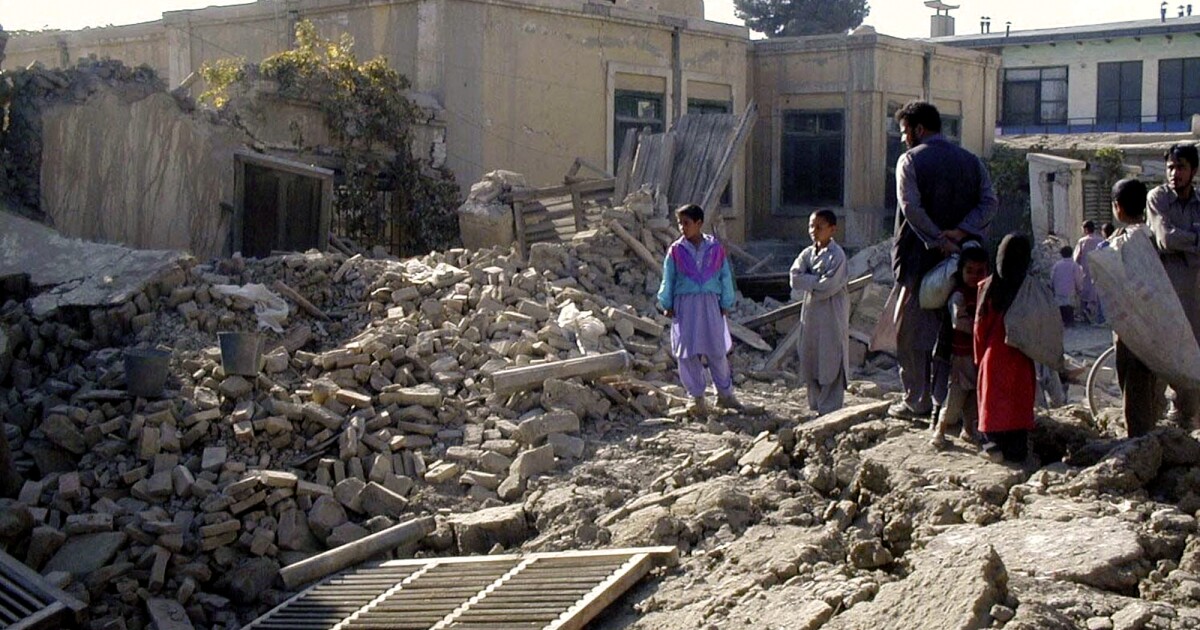 In October 2001, my siblings and I secretly watched an old Bollywood movie in our apartment in central Kabul. The volume knob on our Sony TV was just at the pink mark that my mother had made with her nail polish on its silver body – loud enough for us to hear and understand what was happening on the screen, but not so loud that one of Our neighbors, or worse than that, one of the many Taliban fighters who roamed our streets at night could hear it.

As an extra precaution, my mother had sewn two rugs on top of each other and hung them on the only window in the room, which opened onto a small balcony, where we kept a large light on, to neutralize any flickering blue light from the screen that may spill outside through the cracks on the sides of carpets.

The film was about a rich prince who had to solve seven puzzles to marry a princess. We were halfway through the third riddle as we were all shaken by a loud explosion, followed by our home shaking, and then the whole neighborhood plunging into darkness.

“It’s the Americans!” said my father.

In the weeks leading up to the US-led invasion on October 7, rumors circulated in our neighborhood about commercial aircraft, full of living and feeling people crashing into the world’s tallest buildings in America. Then a friend whose family lived between Kabul and Peshawar, Pakistan, arrived with a copy of a CNN news clip shot at the end of a Jean-Claude Van Damme movie. His mother had hidden the VHS tape roll, without its holster, in her bra under her chadari. Because this single copy was in such high demand, it took me two weeks of waiting – and giving my copy of a recently released Bollywood movie away as a bribe – to get my fingers in it. I still vividly remember the icy silence in our living room as we watched the short clip four times in a row with half-open mouths. I was 16 that day.

Soon, graffiti began to appear everywhere in the city, condemning America and the West. “America the Great Satan!” was painted with black letters on the front wall of my high school. Another painted sign, on the wall of Kabul’s sports stadium, where the Taliban whipped adulterers, chopped thieves’ hands and executed people, said, “Down with the American-glob-consuming imperialism.”

Then one day a truck full of Taliban arrived at our school and took us to about two dozen buses outside. Before anyone knew what was happening, they threw us in front of the abandoned U.S. Embassy building, where many other buses were bringing students from other schools. Then a couple of trucks arrived and dumped rocks on the side of the road. A young Taliban with a spotted beard and white turban climbed on top of one of the piles of stones and started singing slogans against all kinds -ismer, including journalism, and we shouted “death” in chorus at the end of each slogan. Then we threw stones at the large, black gates of the U.S. Embassy, ​​and someone burned a picture.

During the Taliban, the roughest and toughest man in our neighborhood was a young vigilant named Mullah Kebal, who roamed the streets on foot, listening to Taliban taranas, the musicless religious songs, on a small radio. No one knew his real name, but everyone called him Mullah Kebal because he always wore an impromptu one immune – whip – that he had fabricated himself by twisting three layers of electrical wire together and attaching them to a wooden handle.

With his big black turban, he was the ultimate punishment – the judge, the jury and the executioner in cases like the length of men’s beards and hair, modesty in women’s clothing and the level of one’s religiosity. In the morning, he parked his manufactured in China bike at the football field, his immune rest on the seat of it, and make us recite entire chapters of the Qur’an and answer at least three out of five questions about the Prophet’s famous matches before we could start playing football.

Then American planes began checking the blue skies of Kabul with the white tracks they left behind, aiming at government buildings, outposts on top of hills and moving Taliban pickup trucks. There were rumors that the planes were equipped with face recognition technology and could easily distinguish Taliban fighters from civilians. But one time they missed their target and hit a civilian apartment building, killing entire families, and another time a rocket landed on the playground, killing and injuring some children.

Fewer and fewer Taliban came to our neighborhood, and those who came were always driving in their pickups, which they had smeared with dirt for fear of being hit from above. Mullah Kebal, as one neighbor put it, turned into a drop of water and the earth absorbed him. There was a new bully in town and people called it the Mullah B-52.

The day the Taliban left Kabul, my father dug up his razor box, which he had not touched for almost five years. Inside was a small copper bowl, a yellow brush with a red bottom, an old, half-empty tube of shaving cream, some leaves, and a white razor. As the blade moved from top to bottom and from left to right, and as tufts of beard began to fall down on his white hairdressing cloth, we saw our father getting younger with each movement of the razor. My brother brought our little red and black Panasonic tape recorder to the window of our living room and blew up Michael Jackson’s “The Way You Make Me Feel,” his favorite song, at full volume.

That afternoon, we saw one of our neighbors, a former school principal, set fire to his chadari on the playground while a blue truck from Afghan National Radio and Television drove by and blew up love songs through four giant speakers mounted on its roof. Men started clapping and we danced and followed the truck from one apartment building to the next.

At the time, I had also seen my home destroyed, my school bombed, and some of my relatives killed and maimed during the fighting between ethnic warlords, to whom the Taliban owe its appearance in the first place. Over the next month or two, my relatives from rural Kandahar and Zabol arrived at my family’s home with sick women and children, telling stories of bombed-out weddings, forced disappearances, and arbitrary nocturnal raids by Americans and allies of warlords searching for the Taliban. followers.

Soon, Kabul would be covered by the familiar faces of violent, corrupt warlords on huge billboards, in an attempt to revive their tainted images, and the country would belong to a few dozen American-allied families who had everything, while most Afghans had almost nothing.

There would be 20 more years of war.

And then, here in August, I was watching from my home in Ottawa when the house of cards that the Americans had built in Afghanistan crumbled.

Just a day before Kabul fell to the Taliban, my sister Hosai went to work as usual, but was sent home by her boss, who told her she was no longer employed. In the midst of the sob, she told me how she never got married or went abroad, as many of her friends did because she thought her life was in Afghanistan.

The next week or so, as I tried to get my siblings and cousins ​​out of Afghanistan, were some of the hardest days of my life. I stopped eating and sleeping and I felt like I was going to have a panic attack. I was talking on the phone with my siblings as they tried to penetrate the mass of people who had gathered around one of the gates of Kabul airport, where a naval contact was waiting to bring them in. I screamed in pain as my sisters told me how they were whipped by the Taliban and the tear gas by Americans at the gate, and I listened in horror as they told me about women, children, and elderly women being stampeded.

When their first attempt to enter the airport failed, I asked them to try another gate where they saw a woman standing next to them being shot in the face. When I finally managed to get them out of the country with the help of some journalist friends, Hosai called me from a refugee camp to tell me they were safe. But before she hung up, she said: “Is it not amazing that until a week ago I helped refugees, and today I myself am a refugee? What a life.”

My parents have only just begun to appreciate the tremendous change that hit their lives as their children traveled. Suddenly they were alone in our big house, where they had dreamed of playing and spending time with their grandchildren. In our phone conversations, and her subsequent text messages, my mother began to complain that she was having a hard time going into my siblings’ rooms, where their clothes, shoes, socks, and framed pictures were still in place.

Occasionally, and in passing, my mother has accused me of “taking everyone away from me.” To comfort her sad heart, she began sleeping in my siblings’ rooms. Recently, she told me that she has packed my siblings’ rooms and has given their clothes away to our relatives and neighbors.

In October 2001, my father, whose cynicism about everything political is legendary in my family, was surprisingly in the optimist camp. Not only did he predict the rapid fall of the Taliban, but he also believed that this would be the last war and that Afghanistan would soon become like Dubai.

A few days ago, when I called to check in on him, he first complained about the mosquito worm that he was fighting against on our porch. Then he told me about how he had gone for a walk in the newly scattered flea markets in Kabul, where people sell their homes, to “test the pulse of the market.” It was my father’s way of saying that he was thinking of selling our possessions and leaving the country.

I found it surprising, because even when security was worst in Kabul and we all feared for the lives of our working siblings and cousins, my father dug him in the heels and told us not to “pull” him up every time my big brother , living in the UK, and I suggested we move our family out of Afghanistan. I guess the “roots” my dad was talking about were his kids. But we are no longer in Afghanistan.

A few minutes after I hung up, he texted me in Persian on WhatsApp:

I know how much you loved your books,

and with how much care and love you built the little library.

I hope you forgive me. “

Habib Zahori is a former New York Times reporter and writer on the CBS sitcom “United States of Al.”