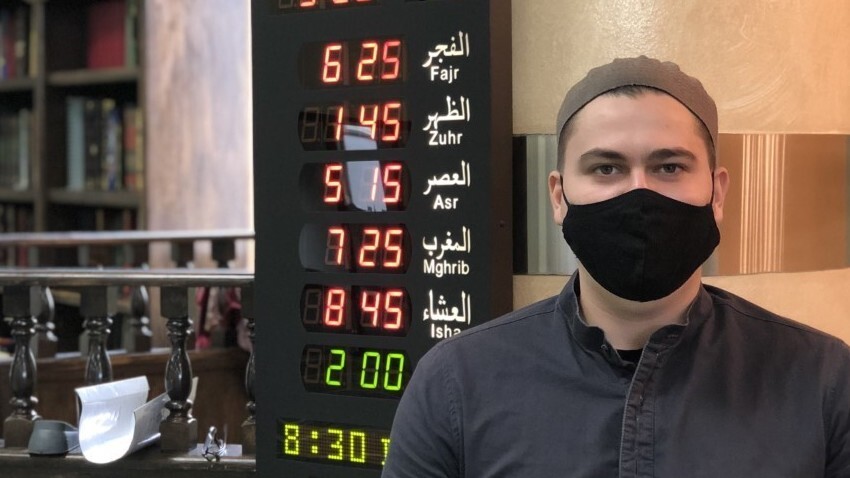 Imam Mohamed Herbert of the Islamic Society of Tulsa, the city’s only mosque whose congregation is preparing to help resettle the 850 Afghan refugees on their way to the city.

Imam Mohamed Herbert of the Islamic Society of Tulsa, the city’s only mosque whose congregation is preparing to help resettle the 850 Afghan refugees on their way to the city.

In a cave-filled warehouse in Tulsa, Okla., Kathy Clarke digs through a large raw material box filled with bedding and keeps an inventory on a clipboard.

“They bring in a lot of stuff, and then we sort it out,” Clarke says. “Right now we’re making twin sheets and counting them while we put them in there.”

The warehouse is usually where Catholic charities in eastern Oklahoma stage donations to its pantry. Today, however, Clarke is one of dozens of volunteers surrounded by donated mattresses, vacuum cleaners, shower curtains – everything a family might need to completely start over.

Clarke, a recently retired university administrator, says she was first attracted to volunteering with Catholic charities after seeing news reports of what the refugees had gone through to escape their homeland.

“I hope whoever sleeps on these sheets has a good life,” she says, getting emotional. “I do. They deserve it.”

Catholic Charities is the only resettlement agency for refugees in Oklahoma, and they are preparing for the arrival of about 1,800 Afghans in the coming days and weeks. It is the third most in the country, after only California (5,255) and Texas (4,481). Tulsa alone is set to take in 850, more than most states.

Preparations for the arrival of the refugees have largely fallen on the shoulders of the city’s faith leaders. On a block of flats a few miles from the warehouse, First United Methodist Church senior pastor Jessica Moffatt locks the front door of one of six houses her congregation is repairing and renting to Afghans at no cost.

Donated items are sorted in a warehouse for incoming families.

“We just talk all the time about being aware of the possibilities of giving what I call ‘sacred hospitality’ to everyone who comes our way,” she says.

The city’s spiritual leaders from different faiths and denominations agree to help the Afghans, she says.

“And there’s not much we can say that we all agree on,” she says.

“I’ve seen it a lot in Tulsa,” says the leader of the city’s only mosque, which draws about 2,000 worshipers a week.

“Of course, that does not mean we do not have problems, everyone has problems,” says Herbert, a Baltimore native who moved to Tulsa two years ago after completing the seminar in Dallas. “But from my own unique personal experience, I have seen nothing but, you know, people just open their hearts and hands to anyone who is new.”

Public sentiment in Oklahoma seems to reflect the recent NPR / Ipsos vote, which finds that most Americans support the resettlement of Afghans. But there is some loud disagreement.

In several Facebook videos, the chairman of the Republican Party in Oklahoma, John Bennett, says that the party does not consider the refugees to be welcome in the state.

“Oklahomans, I urge you to call and email the governor, call and send an email to your legislators and tell them: Do not allow Afghan refugees to enter Oklahoma,” Bennett said.

A spokesman for Conservative Republican Gov. Kevin Stitt said in a statement that he “welcomes Afghans fleeing the terrorist Taliban regime to come to Oklahoma and live in the freedom we hold so high.”

“I do not think the Republican Party is speaking on behalf of most of the Republicans I speak to, and certainly not the elected representatives,” Bynum said.

The mayor has asked the city to redirect furniture on its way to a surplus auction to decorate the refugees’ new homes, and has made sure the local transit agency gives them free bus passes. Bynum has even signed up for volunteer guards.

“My hope is that these refugees who come to our city, that’s what they recognize by their new home, is that it’s a city where we help each other, whether you’ve lived here your whole life, or “You just got off the plane from Afghanistan,” said Bynum.

Deacon Kevin Sartorius, local executive director of Catholic charities, says all refugees will be met at Tulsa International Airport by an interfaith welcome committee wearing shirts that read “WELCOME!” in English as well as Dari and Pashto, Afghanistan’s two most spoken languages.

“I know that if my grandparents who came over from Germany had someone waiting for them with a shirt in German that said ‘Willkommen’, I think they would have been happy and it would have given them a smile on his face. “says Sartorius. “So let’s hope we can do the same for these people.”

Back at the mosque, Imam Herbert says volunteers will cook halal meals and simply help their new neighbors adjust to life in the United States

Herbert says he hopes the refugees feel as welcome in Oklahoma as he has done.

He will soon know if that wish comes true. The very first refugee landed on Friday, with hundreds expected to follow in the coming days and weeks.