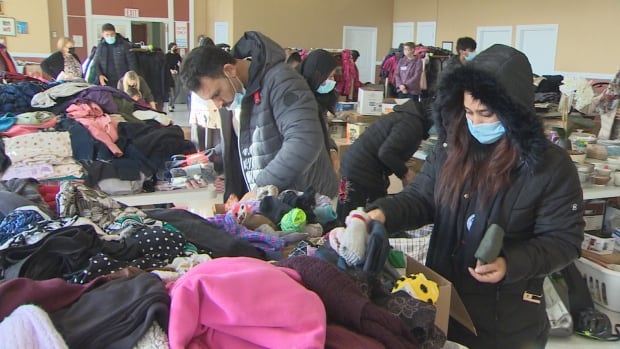 For more than 150 Afghans who have recently arrived in Newfoundland and Labrador, the move is a chance to start a new life in safety.

Newcomers were able to chat, play and collect donated household items Tuesday during an event at the Association of New Canadians’ donation center in St. Louis. John’s. Donations included clothing and toys that refugees could have as they prepare to move into permanent housing.

The federal government has so far brought 157 Afghan refugees to Newfoundland and Labrador, who left the country following a takeover of the Taliban. The province’s immigration minister Gerry Byrne said he expects more citizens will land in the province, but so far the government is focused on helping those who have already arrived to resettle.

For a novice who recently arrived with her parents, siblings and grandmother, the long journey to Newfoundland is a fresh start for her family.

“I felt peace and I was thinking of peace when I landed here,” the woman said through an interpreter. “When the Taliban came and took over, no one felt safe over there. No one felt at peace over there. Everyone was constantly in a state of fear. So when I came here, I was very grateful and happy, that we are finally safe here. “

CBC News does not identify individuals interviewed for this story because of security issues.

‘Some of our families are left behind’

But while everyone was grateful to be out of Afghanistan and safe in a new homeland, the conversations were also about the people who were not there.

“Right now, some of our families are left in Afghanistan,” a newcomer told Byrne through an interpreter. “We’re trying and it was our best effort to get everyone together, but we could not make it.”

The man explained that he has been in contact with the family still in Afghanistan and fears for their safety. He said the Taliban come to his home to look for him every week and he fears they will take a member of his family.

“They are even worse than animals. If they catch anyone, they will behead them. They will kill them,” he said.

“I am very grateful to be safe here, and that you have given us this place to live and be safe. But inside, spiritually, mentally, we are not completely and completely at peace.”

SE: A man arriving from Afghanistan speaks to Minister Gerry Byrne through an interpreter:

The man spoke to the minister through an interpreter. For security reasons, CBC protects his identity. 1:42

The man urged Byrne and the federal and provincial government to work faster to get more Afghans seeking asylum into Canada.

Byrne told the man that his story was “very difficult to listen to, but very important that everyone listens.”

He added that negotiations are continuing between provincial and federal governments and the UN to bring more people from Afghanistan into the country, and that family reunification is a top priority.

“We will do our best to work with you and work with Canada to ensure that all those at risk … have the opportunity to be repatriated, including family members like yours,” Bryne said.

The couple ended the conversation with a hug and a blessing of mutual respect.

Prime Minister Andrew Furey also showed up at the event, saying he felt humbled to be part of the group welcoming people to Canada from Afghanistan.

“There is an incredible enthusiasm and optimism that this is their new home,” he said. “When we talk to a couple of gentlemen and some of the kids, everyone appreciates the generosity, but also the opportunity that Canada can afford for them and their families.”

Antwone Aslan, Association of New Canadiers Coordinator of Settlement Services, said he has seen the excitement for people coming to the province.

“The morale has been really positive and they just can’t wait to get on with their lives and start their lives here in St. John’s and become part of the community as soon as possible,” he said.