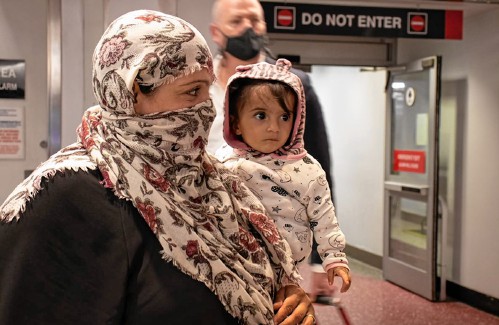 More than 50 evacuees from Afghanistan have so far arrived in New Hampshire, and a dozen people have settled in Concord and the surrounding area.

To deal with the influx of new arrivals and allow more geographical flexibility to find housing, the two state resettlement agencies have turned to volunteers for help facilitating the transition for people fleeing Afghanistan in August.

The Ascentria Care Alliance Resettlement Agency has received 3 families, a total of 14 people, in the area near Concord and Nashua.

Crissie Ferrara, program manager for services for new Americans at Ascentria, said that after Thanksgiving, Ascentria expects to welcome new Afghan arrivals every week into 2022. The organization is committed to helping 100 people who fled Afghanistan as humanitarian probationers Find New Homes in New Hampshire.

The International Institute of New England, another agency that resettles Afghans in New Hampshire, had accepted 38 out of an expected total of 75 Afghan arrivals per year. November 19, most in Manchester.

Ascentria has sought to resettle Afghan evacuees in Concord, where its offices are located and a new cultural community may begin to take shape, but the organization has struggled to find vacant apartments due to the tight rental market.

“There’s a family that has been placed with a Concord family living in their in-laws’ apartment,” Ferrara said, “we look at it as a model and ask the community to get involved and possibly house people if they have the space. . ”

Ascentria also resettled a family in Nashua and is looking at opportunities for Afghan families in Keene, the Upper Valley and along the sea coast. To facilitate resettlement in more remote parts of the state, the agency has put neighbor support teams in place.

Under this model, a volunteer group of about 10 to 30 people living locally commits to helping a family take place during their first few months in the area.

“They get investigated, they get background checks, they raise money, they’re organized,” Ferrara said. “There is usually a time frame, a minimum of six months to a year. Then the friendships usually last longer than that.”

Neighborhood support teams are strategically trained to cover a variety of skills that can help the area’s newcomers, such as teachers who can help children adapt to school. The Concord group includes a member who speaks Farsi, a language also spoken in Afghanistan, where it is called Dari.

Members of these groups coordinate with Ascentria staff to help evacuees find work, enroll children in school, offer transportation to medical appointments, and, in the case of a recent team performance, enroll a young girl in a dance class.

Ferrara said Ascentria had considered implementing this cosponsor model, which has been used successfully in the past in Europe and Canada. With the fast pace of arriving Afghans and the housing challenges in Concord, the model is even more appealing now.

Difficulties in hiring enough staff have increased the challenges of the resettlement process. Ascentria is looking for caseworkers, while the International Institute has a number of vacancies.

“We are still trying to hire, which has probably been more difficult just because of the wage crisis,” Ferrara said.

The International Institute also turned to volunteers to scale up its Afghan resettlement work. Traditionally, volunteer teams helped create apartments for arriving refugees, said Diane Shohet, director of development and communications, but the organization is trying to involve more community members in the resettlement process in family support teams.

“Given the large amount of people coming, we are changing our model to include circles of volunteers,” Shohet said.

A few differences distinguish the Afghan resettlement process from the traditional refugee pipeline. The Afghans arriving in New Hampshire are not technically refugees, but entered the United States with a temporary status called humanitarian probation. While Afghans with status can access most of the services available to refugees, unlike other refugees, they must be granted asylum in order to become long-term residents of the United States or citizens.

Most refugees spend years in camps in other countries waiting to be allowed to enter or to be able to return to their home country. The Afghan evacuees have been waiting for military bases in the United States before moving to local communities.

Because they fled so recently, Shohet said many of the Afghan arrivals deal with recent traumas and have to leave belongings, documents and personal memorials that other refugees could take with them. “These people have nothing,” she said.

An organizational downsizing following a slowdown in refugees entering the country under the Trump administration means the institute has had to rapidly increase its capacity to resettle Afghans.

“The whole resettlement program under the previous administration was pretty much dismantled, at one point we were down to 15 refugees, so all of a sudden we have this huge wave of people who have very specific needs,” Shohet said.

For residents who want to help arriving Afghans, Ascentria is looking for volunteers to sort donations and perform administrative tasks in the office. The agency also resettles refugees from Congo and Sudan in addition to Afghans.

Both Ascentria and the International Institute will receive donations of money and gift cards to local businesses.

Shohet wants New Hampshire residents to know that Afghans arriving in the United States still need our help, even after the Taliban’s takeover of Afghanistan after the US withdrawal has left headlines.

“I know the Afghans are less in the news now, but these people need our long-term support,” Shohet said. “In the spirit of giving vacation, if they want to support the institute or support these people in the long run, it would be invaluable.”