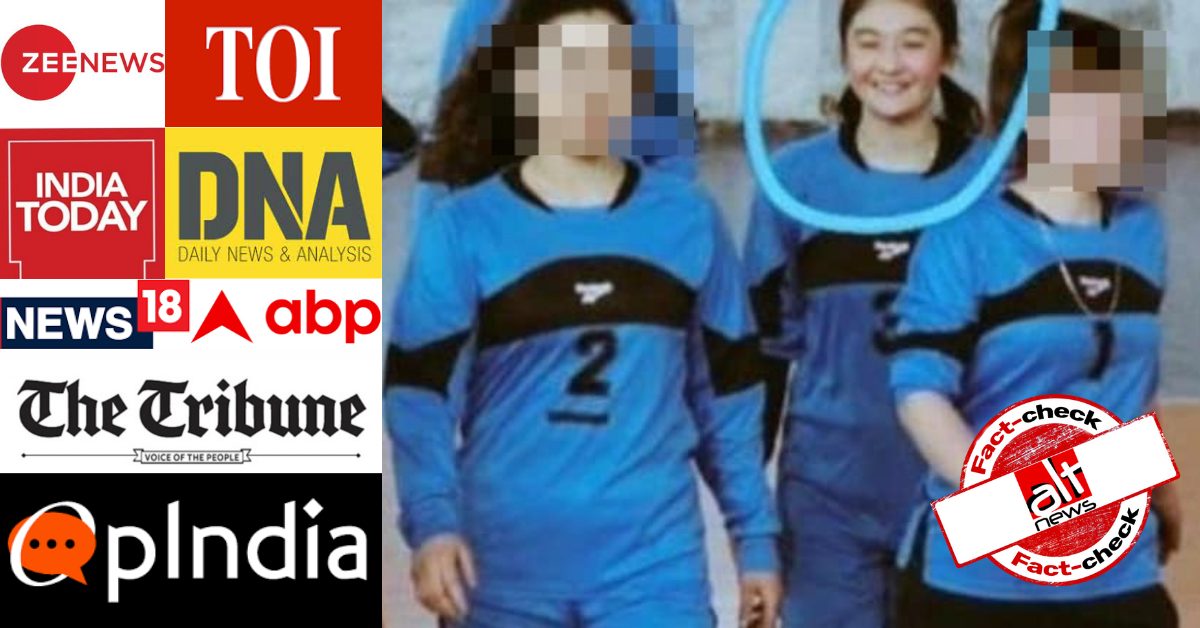 The Taliban’s takeover of Afghanistan is a blow to women’s rights in the country. Many women have taken to the streets to protest the harsh regime. Afghan female leaders have also claimed that they are threatened with death.

But the rise of the Taliban to power has also given rise to misinformation.

Many of these reports brought the news to the Independent Persian, who claimed that the coach of the volleyball team (accused by the pseudonym Soraya Afzali) said that Mahjabin was probably killed in early October, but the incident remains under cover because her family has received threats .

Several social media users questioned the media reports of Mahjabin Hakimi’s death. They pointed out that she died in the first week of August before the Taliban had taken control of Kabul.

Journalist Deepa Parent wrote that she spoke to Hakimi’s family and they said the news of her death was “misleading”.

Guys, talked to a family member of Mrs. Hakimi and have deleted tweets about her death. Please consider the family request and delete them as well. The news of the cause of her death is misleading. Please pray for her peace. REST IN PEACE

Alt News contacted an Afghanistan-based journalist, who informed: “The Indian media reports of Mahjabin Hakimi’s death are false. Nevertheless, the circumstances surrounding the death are complicated. According to her family, she was killed by her fiancé’s family – a case of honor killings. The Mahjabin’s in-laws claim the death was caused by suicide. ” The journalist said that Mahjabin came from the village of Toghai in the Jagjoori district of Ghazni province but she lived in Kabul.

But Twitter user Raihana Hashimi, who claims to have known Mahjabin personally, responded to Hossaini, saying: “She was a member of the Afghan National Army Command and was killed by her in-laws 10 days before the Taliban. [took over Kabul]. “

Alt News spoke to a person who coached Mahjabin in 2015. The coach said: “In 2015 she was part of my team. This team played inter-city matches in a non-competitive league. In 2016 I left Afghanistan. Until then she had not the game for the national team. ” Alt News reached the Afghanistan Women’s Volleyball Association, the article will be updated if they respond.

Alt News found the Facebook profile of Skandar Hakimi, Mahjabin’s brother. On August 7, Skandar changed his exhibition image to a black image, which received over 100 comments with condolences written in the Persian language. One of the comments read: “My deepest sympathy for the death of your dear sister.” On August 9, he posted a picture of Mahjabin in military gear along with the caption: “I will always be proud of you dear sister.” Alt News has contacted Skandar and this article will be updated if he responds.

I will always be proud of you dear sister.

After messing with Skandar’s profile, Alt News managed to connect with a family member of Mahjabin over a phone call. Canada-based Afghanistan activist Farishta Barez helped us communicate by interpreting Dari Persian, one of the prominent dialects of Afghanistan. The relative also confirmed that Skandar is Mahjabin’s brother.

The family member stated that Mahjabin was engaged to a Majid Khan in 2020. Since then, she has lived in her fiancé’s home in a joint family compound in Kabul. Mahjabin was to be married shortly before her untimely death. The relative further revealed that Mahjabin had a scholarship from the United States and this became a cause of conflict with her in-laws. Alt News has reached out to the Mahjabin’s fiancé. This article will be updated with his opinion if he responds.

“She was not killed by the Taliban in October. Mahjabin’s death occurred on August 6, and her body was found in her fiance’s bathroom in Kabul. He claimed that Mahjabin strangled himself to death. However, our family suspects the dishonesty of her parents-in-law. “

The first three sentences of the tomb are called, as translated by that relative, “Tomb of the late Mahjabin Hakimi daughter of Mohammad Sarwar Hakimi, who joined the grace of God on Friday night, 15/5/1400 at the age of 25.”

Facebook user Zarmina Alizada, who appears to have been friends with Mahjabin, had sent a message of condolence on August 7 along with the identical date of death, 15-5-1400.

Two days later, on August 9, Alizada made a post after returning from Mahjabin’s funeral.

Speaking of Mahjabin, the relative said: “Mahjabin was a role model for both young girls and women. Like her father, Md Sarwar Hakimi, she was interested in sports such as volleyball and basketball. Since 2015, Mahjabin has worked in the Ministry of the Interior,” and shared a screenshot of a Facebook post of Sarwar about his daughter’s death. We can not see the post because it is not public. But Sarwar shared a picture of Mahjabin’s dead body. She has a visible red mark in her throat. Alt News contacted her father on WhatsApp, and the article will be updated if he responds.

Below are a few photos of Mahjabin that the relative shared with us.

We also got access to a picture of her invitation card for the memorial service made by her family. The ceremony took place on August 22nd. The Mahjabin picture on the map matches one of the pictures that her relative shared.

Thus, Alt News has in its investigation found that Mahjabin Hakimi’s death was either caused by suicide or her parents-in-law played a role in her death, as her family claims. The family does not believe the Taliban were involved. We can not confirm the cause or circumstances of her death, but we can conclude that she died on August 6 and not in October, as reported by Independent Persian and several Indian media. Moreover, the photograph of her dead body, which her father shared, proves that she was not beheaded.

Donate to Alt News!
Independent journalism that speaks the truth to power and is free from corporate and political control is only possible when people contribute to the same thing. Please consider donating in support of this effort to combat misinformation and misinformation.

To make an immediate donation, click the “Donate Now” button above. For information on donation via bank transfer / check / DD, click here.