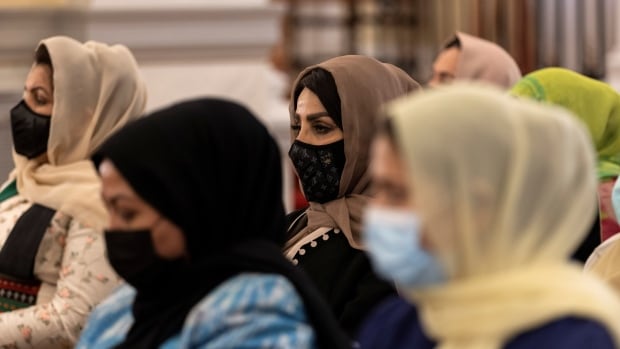 Transcript of the story

Canada owes a debt to the dozens of Afghan female judges who had to flee their home country after the Taliban took control, says a British lawyer who helped get them out.

They dedicated their careers to bringing addicts, drug smugglers and terrorists to justice in Afghanistan, Helena Kennedy said. As it happens guest host Nil Köksal. Now that the Taliban have released thousands of inmates, these women have targets on their backs.

“They were trying to make the world a safer place for all of us. Because, you know, terrorism, heroin exports, all that is so destructive of our world,” said Kennedy, a human rights lawyer and member of the British House of Lords.

As director of the International Bar Association’s Human Rights Institute (IBAHRI), Kennedy helped ease the flight of 104 Afghan female judges, prosecutors and their families after Kabul fell to the Taliban earlier this year.

These women are now in Greece under temporary visas, which expire on 24 December. If they do not find countries to take them in by then, they will be forced to seek asylum and will be transferred to the country’s infamous refugee camps.

“I need to get them out, and I ask Canada to be a friend to these women and give them this opportunity to have another life,” Kennedy said.

‘In fear of their lives’

Kennedy says she began sending calls and texts from female judges in Afghanistan shortly after the Taliban took control of the country in August.

“Suddenly I got all these calls and they were so desperate,” she said. “They were women who were in terror for their lives, and they had good reason to be.”

We are slowly, slowly getting the numbers down, but I hope Canada will make an offer.– Helena Kennedy, International Bar Association’s Human Rights Institute

Securing their escape was no easy feat. Kennedy and IBAHRI relied on donations from the public, expertise from charities evacuating people from Afghanistan, and anonymous contacts on the spot to make sure the women and their families travel to safe homes first. They were then transported by convoy to the airport in Mazar-i-Sharif, Afghanistan’s fourth largest city.

The women had to travel under the cover of burqas. A woman, Kennedy says, hid her diplomas under her clothes as she was driven past Taliban checkpoints because she could not bear to leave them.

“Some of these women were… in their basements and hid because they had been threatened on their own phones. But also members of their family had received threats and conveyed messages to tell the women that they were to meet Allah shortly , “said Kennedy.

In the end, she says she managed to get 104 people on two charter flights out of the country to Athens, where she convinced Greek President Katerina Sakellaropoulou – herself a former lawyer and judge – to help give them safe passage.

The women and their families now live in hostels in Athens. Ireland, Iceland, Brazil and Australia have agreed to accept some of them, Kennedy said, but many are still facing an uncertain future.

“They do not know what happens next,” she said. “We are slowly, slowly getting the numbers down, but I hope Canada will make an offer.”

When Kabul fell to the Taliban, the federal government created a special immigration program for Afghans working for the Canadian government, as well as one for Afghans from vulnerable groups, “including women leaders, human rights defenders, journalists, persecuted religious minorities, LGBTI individuals and family members of former resettled interpreters. “

Canada was preparing for a federal election when Kennedy first began asking questions on behalf of the judges, she said. But now she hopes Sean Fraser, the newly-appointed immigration minister, will step in.

Alexander Cohen, a spokesman for Fraser, said As it happens that Immigration, Refugees and Citizenship Canada can not comment on specific cases, but the department “has been in contact with lawyers representing a large number of Afghan refugees, including judges.”

“As requests to support persecuted groups have increased dramatically since the fall of Kabul, Canada is working hard to help as many vulnerable people as possible,” Cohen said in an email statement.

Canada has so far received 4,300 Afghan refugees, Cohen said, aiming to meet its 40,000 target over the next two years.

“It’s worth remembering the role they played … in trying to build the kind of society we want to see around our world,” Kennedy said.

“It’s people, like the parliamentarians, that we really need to make an offer to, as a symbol to the world that this is important.”