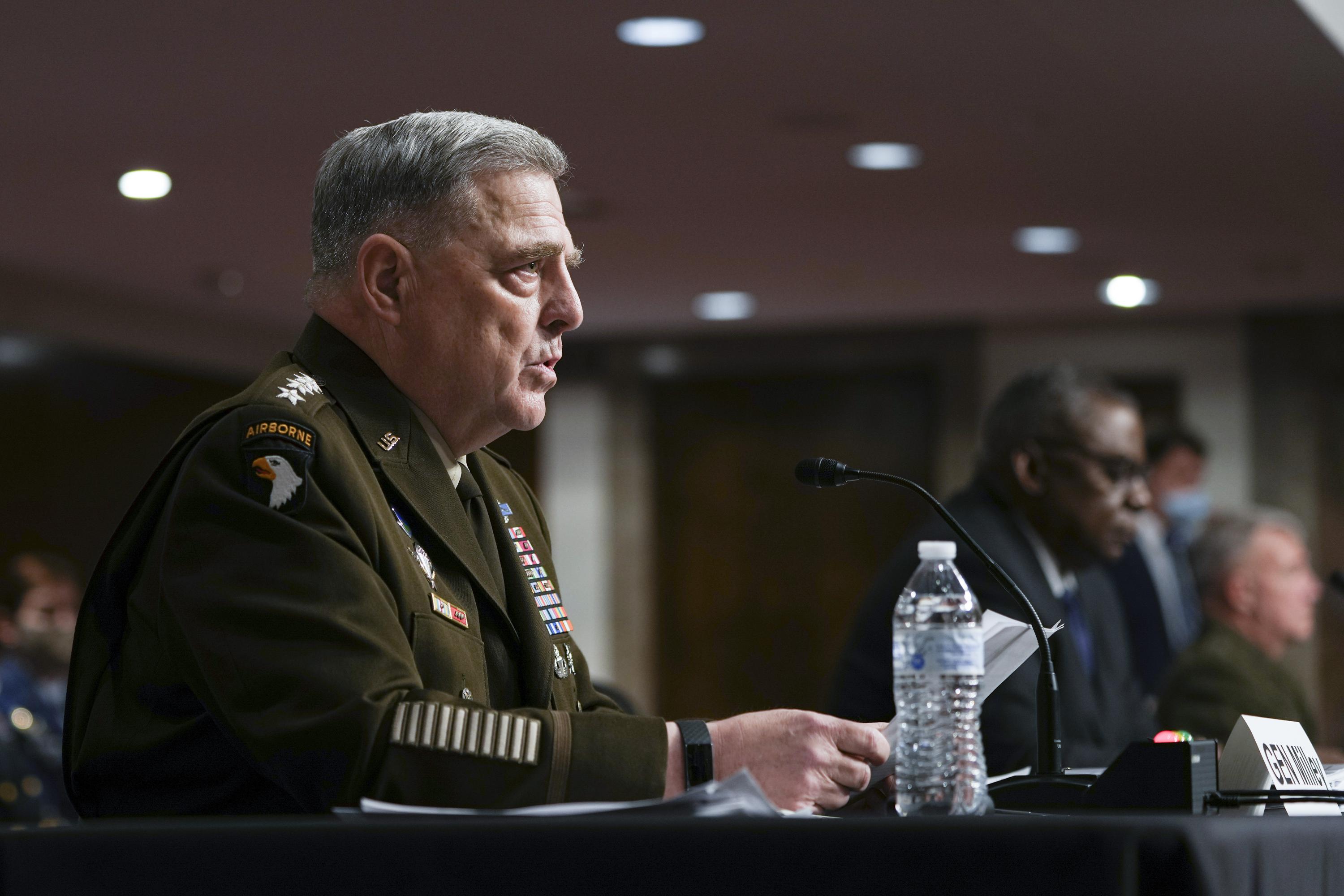 WASHINGTON (AP) – The top U.S. military officer called the 20-year war in Afghanistan a “strategic failure” and acknowledged to Congress on Tuesday that he had advocated keeping thousands of troops in the country to prevent a collapse of it US-backed Kabul government and a swift takeover of the Taliban.

Republicans in the Senate Armed Services Committee cited the testimony of General Mark Milley, chairman of the Joint Chiefs of Staff, as evidence that President Joe Biden had been untruthful when he suggested in a television interview last month that the military had not urged him to to keep troops in Afghanistan.

Milley declined to say what advice he gave Biden last spring when Biden considered whether to abide by an agreement the Trump administration had made with the Taliban to reduce the US troop presence to zero by May 2021, ending an American war , which began in October 2001 Secretary of Defense Lloyd Austin testified alongside Milley and also refused to disclose his advice to Biden.

Milley told the committee, when pressured, that it had been his personal opinion that at least 2,500 US troops were needed to protect himself from a collapse of the Kabul government and a return to the Taliban regime.

Despite US intelligence assessments, the Afghan government and its US-trained army collapsed in mid-August, enabling the Taliban, who had ruled the country from 1996 to 2001, to conquer Kabul with what Milley described as a few hundred men on motorcycles without a shot being fired. It triggered a hectic US effort to evacuate US civilians, Afghan allies and others from Kabul airport.

General Frank McKenzie, who as head of the central command oversaw US troops in Afghanistan, said he shared Milley’s view that retaining a remaining force could have kept the Kabul government intact.

“I recommended that we maintain 2,500 troops in Afghanistan, and I also recommended in the early fall of 2020 that we maintain 4,500 at the time it was my personal views,” McKenzie said. “I also had a view that the withdrawal of these forces would inevitably lead to the collapse of the Afghan military forces and ultimately the Afghan government.”

The six-hour Senate hearing marked the start of what is likely to be an expanded congressional review of U.S. failures in Afghanistan. The length and depth of the hearing contrasted with many years of limited congressional oversight of the war and the hundreds of billions of taxpayers it consumed.

“The Republicans’ sudden interest in Afghanistan is ordinary old politics,” said Sen. Elizabeth Warren, a Massachusetts Democrat who supported Biden’s decision to stop US involvement there.

Austin and Milley are scheduled to meet Wednesday for the House Armed Services Committee to review the war.

The hearing was at times controversial as Republicans tried to portray Biden as having ignored the advice of military officers and mischaracterized the military options he was presented with last spring and summer.

Several Republicans tried unsuccessfully to persuade Milley, McKenzie and Austin to comment on the truth of Biden’s statement to ABC News on August 18, three days after the Taliban took control of Kabul, that no senior military chief had recommended a complete withdrawal of troops as it was under discussion in the first months of Biden’s tenure.

When asked in that interview whether military advisers had recommended keeping 2,500 troops in Afghanistan, Biden replied, “No. No one said that to me as I can remember.” He also said the council “was divided.”

White House Press Secretary Jen Psaki said Tuesday that Biden referred to having received a number of pieces of advice.

“Whatever the advice, it’s his decision, he’s the commander – in – chief,” she said.

In a direct assessment of a war that cost 2,461 American lives, Milley said the result was years in the making.

“Results in a war like this, a result that is a strategic failure – the enemy is in charge in Kabul, there is no other way to describe it – it is a cumulative effect of 20 years,” he said, adding that lessons must learned, including whether the U.S. military made the Afghans too dependent on U.S. technology in a failed attempt to make the Afghan army look like the U.S. Army.

Republican Sen. Tom Cotton of Arkansas asked Milley why he chose not to resign after his advice was rejected.

Milley, who was appointed to his post as chief of staff by President Donald Trump and retained by Biden, said it was his responsibility to give the commander-in-chief his best advice.

Austin defended the military’s execution of a hectic airlift from Kabul in August, claiming it would be “difficult but absolutely possible” to curb future threats from Afghanistan without troops on the ground.

Milley mentioned “a very real possibility” that al-Qaeda or the Islamic State group’s Afghanistan connection could be re-established in Afghanistan under Taliban rule and pose a terrorist threat to the United States over the next 12 to 36 months.

It was al-Qaeda’s use of Afghanistan as a base from which to plan and carry out its attacks on the United States on September 11, 2001 that triggered the US invasion of Afghanistan a month later.

“And we must remember that the Taliban were and remain a terrorist organization, and they still have not broken ties with al-Qaeda,” Milley said. “I have no illusions about who we are dealing with. It is unknown at this time what he will do after leaving the post.

Austin questioned decisions made during the 20-year course of the American war in Afghanistan. In hindsight, he said, the U.S. government may have put too much faith in its ability to build a viable Afghan government.

“We helped build a state, but we could not create a nation,” he told the Senate committee. “The fact that the Afghan army we and our partners trained simply melted away – in many cases without firing a shot – surprised us all. It would be dishonest to claim otherwise. “

Asked why the United States did not anticipate the rapid collapse of the Afghan army, Milley said that in his view, the US military lost its ability to see and understand the true state of the Afghan forces when it stopped the practice of having advisers a few years ago. . along with the Afghans on the battlefield.

“You can not measure the human heart with a machine, you have to be there,” Milley said.