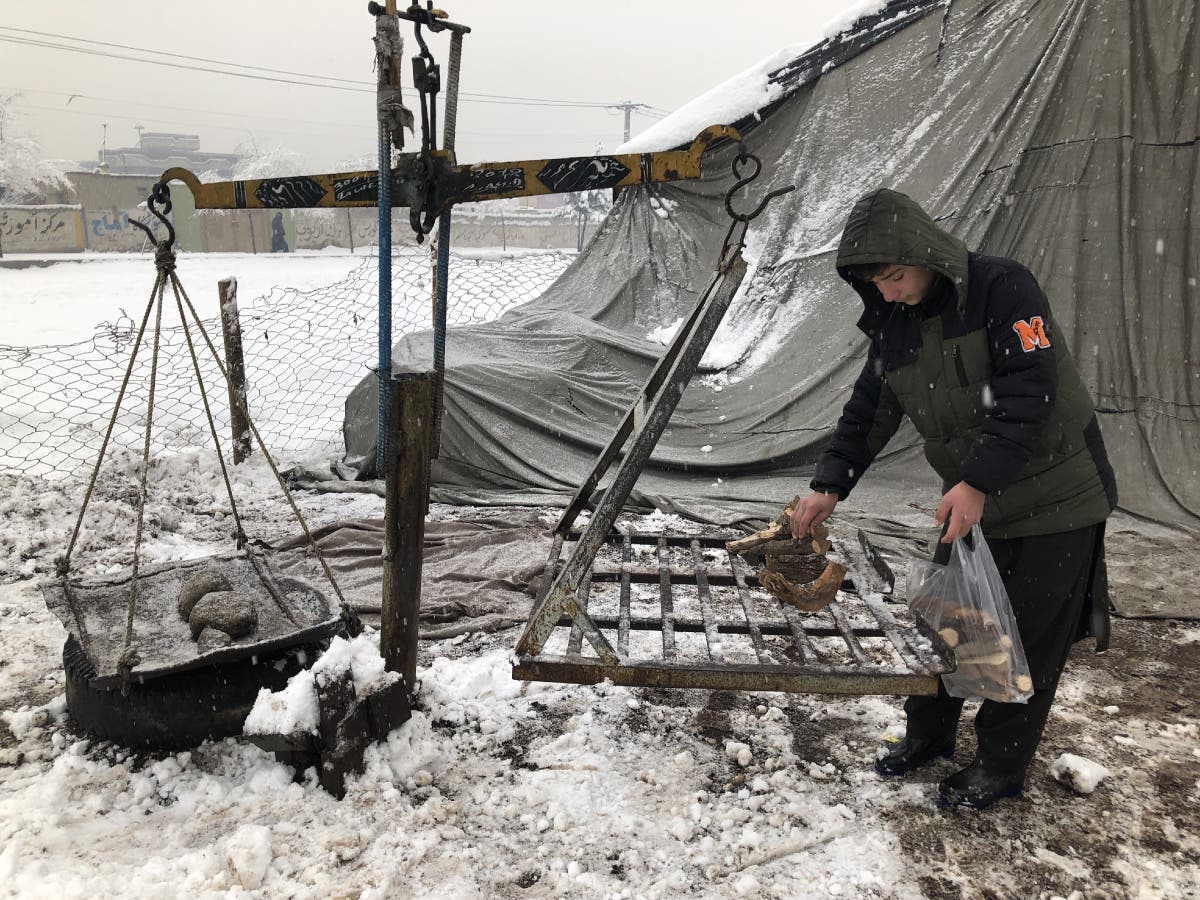 Tthe snow began to fall early and beautifully dusted trees and fences in the Afghan capital this week, but turned unpaved alleys in the neighborhood into treacherous sludge. In many poor homes, the heat from used coal chips and wood debris in old metal stoves died long before dawn.

Mahmad Ewaz, 28, a former tenant farmer and father of four who fled fighting in Helmand province two years ago, listened to his one-year-old daughter cough and considered a single tree trunk resting in the corner. The pantry of the family’s mud-walled home in western Kabul contained only a few onions and potatoes, and the stove was dark. It was too cold for his boys to go out and clean, so he reached out for the bar and started shaving pieces off.

“The authorities tell us it’s safe to return home now, but we have nothing left there,” Ewaz says with a sigh. However, life in the city has become much more difficult since the Taliban took power again in August. He earns less than a dollar a day by sewing soles on shoes, and the cost of heating fuel has risen far beyond the family’s capabilities. “This log will at least give us a few more hours tonight,” he says.

The country’s new rulers, cut off from most international aid as well as Afghan government assets on US accounts, have scarce resources to protect millions of vulnerable people from yet another harsh winter. Aid groups estimate that nearly 23 million Afghans, out of a total population of 39 million, already do not have enough to eat. Many also lack solid shelter and money to heat their homes at night, forcing them to choose between food and fuel and creating additional potential for a full-blown humanitarian disaster, aid agencies say.

Many Afghans lived a meager life before the Taliban took power. But others are part of a large, newly impoverished urban working class that grew up after the sudden collapse of the vast foreign-funded war and aid economy.

“Everywhere we go, we find thousands of people in need,” said Babar Baloch, a spokesman for the office of the UN High Commissioner for Refugees in Geneva. “They have not been evicted from their homes, but they have lost their jobs, they have no savings and their living systems are collapsing. They are not on our lists, but they come and wait outside the distribution points and say, ‘What about U.S?”

The agency supplies food, blankets and cash for heating fuel to 70,000 people a week in Kabul. Its main focus is on families displaced from rural areas due to conflicts, a group that last year grew from 3.5 million to more than 4 million as Taliban fighters swept across the country. With the war coming to an end, UNHCR officials say, it is safer to provide assistance, but many of the most needy do not meet their strict criteria.

This winter, the World Food Program has also expanded its activities to provide basic food or cash to the most needy families, such as those run by widows or unemployed breadwinners. Program officials say they helped 8 million people in December and expect to reach 12 million this month.

In addition to providing food aid directly, the program uses cash and “vouchers” through local banks, mobile networks and money transfer agencies. The coupons, which are worth between £ 45 and £ 60 depending on the need in each area, allow people to buy their own food or other necessities.

“Nothing goes to the government,” said Shelley Thakral, a spokeswoman for the program in Kabul.

As the snow falls steadily from a slate-gray sky, more than 2,000 men and hundreds of women stand in line outside a warehouse in the impoverished Karte Naw district, awaiting distributions of flour, beans, salt and cooking oil provided by the World Food Program. Protest shouts erupt at regular intervals when people without the necessary paperwork are rejected.

As the lines advance, approved applicants – war sinkers, unemployed construction workers, people caring for sick relatives at home – emerge from the warehouse with signed white tickets in their hands. Then they follow porters with wheelbarrows rolling heavy flour sacks and other supplies for waiting taxis.

Along a nearby boulevard, women covered in burqas sit squatting in snowdrifts, reaching out to cars crawling past. An elderly man holding an empty sugar bag says his family has applied for food aid but has not heard back. His plan for the day is to knock on doors, ask people if they should have shoveled their sidewalks, and hope they put a few potatoes or carrots in his sack as payment.

“My life is tough, but it gets a lot harder in the winter,” says Abdul Hadi, 75, who works as a wheelbarrow porter in warmer weather. A few meters down in a sloping alley, his daughter and several grandchildren sit gathered around a wood-burning stove in one of two rented rooms. Hadi’s battered metal bar is in the other, stacked with flattened cardboard to feed the fire. “We do not even have enough money for bread,” he says, his face curling up in defeat. “It’s the same story in all families. Tell the world to help us. “

Coal and lumber merchants waiting inside fenced-in courtyards stacked high with stacks of firewood from the eastern Afghan forests and sacks of coal from the northern mountains draw only a stream of customers despite the widespread, desperate need for heat . A boy of 12 trudges through the snow to buy 20 sticks of firewood, keeps a close eye on how his order is weighed and delivers 50 øre. He says it keeps the family one night.

“People can not afford to buy now and we can not afford to sell,” said Shahwali Khan, 50, warming his hands over a small fire at his fuel supply yard in a poor Kabul district. “Everything is connected. The government has collapsed, people have no wages and the economy has gone to zero.” In previous winters, he said, “even ordinary people took 100 kilos home [of wood] at some point. Today I will be happy if I sell 20 kilos in the dark. ”

Although the cash Taliban government has almost no funds to help the poor, it has coordinated closely with foreign aid programs, mainly by providing armed escorts for supplies and security for overcrowded distribution points. All supervisors and workers in the workplaces are Afghans. Officials who interact with the poor, such as needy people who come to the gate of the Ministry of Refugees, also pass on their requests for help.

Mufti Abdal Motalib, spokesman for the Ministry of Refugees, says his office has worked with several foreign agencies, including the UN refugee agency, without touching any of the funds they receive. In rural areas, where the distribution of aid was once limited by fighting, he says, the new authorities are now helping to deliver it from provincial centers. “That [charities] have relations with the international banks, and we do our best to facilitate their work, ”he says. “We want as many Afghans as possible to be helped.”

The sun has reappeared, but the weather is bitterly cold and more snow is expected. Outside a long-abandoned grain elevator, Taliban police are on guard, while trucks arrive from department stores with wheat from Kazakhstan, rice from Tajikistan and cooking oil from Russia. Afghan officials from the German charity World Without Hunger are supervising, while rows of wheelbarrows are filled with food bags and plastic bags with personal supplies, including toothbrushes, disinfectant, towels and shampoo. In two weeks, they say, they will start handing out blankets and overcoats.

At 9 a.m., the first of 221 families on the day’s list begins arriving. A woman named Parasto, speaking down from a burqa, says her husband once worked repairing car batteries but is disabled. She says her two sons of 12 and nine go to school in the morning, after which they make some money by selling plastic bags that people can burn in their stoves.

Mustafa, the older boy, blows in his cracked hands. “It’s cold work,” he says, “and I get cold quickly.”