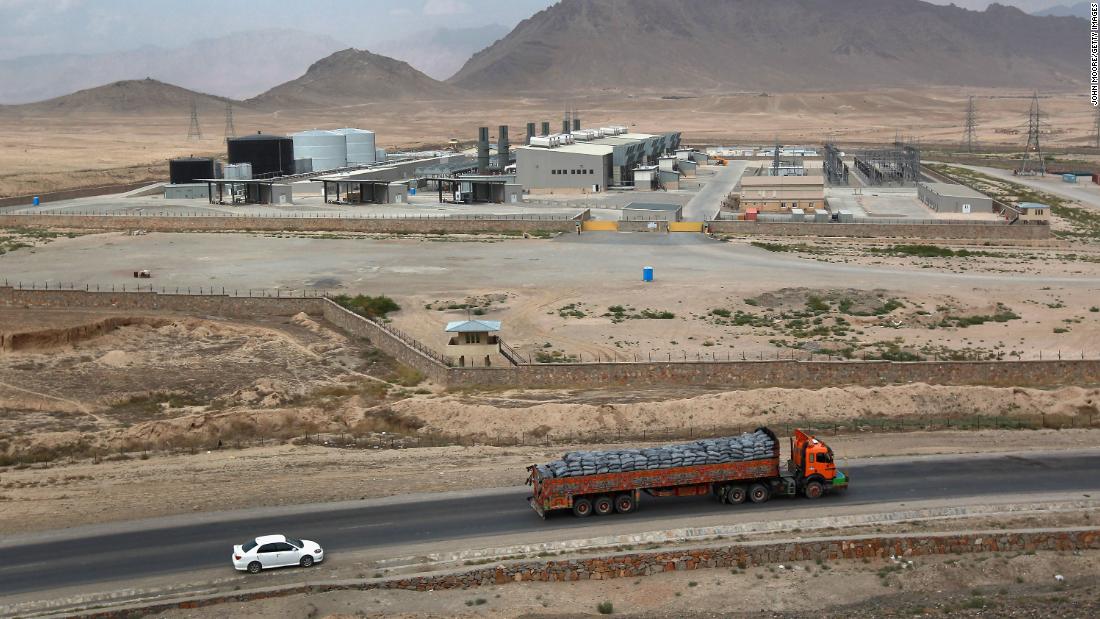 The total cost of the war, according to the Pentagon, was $ 825 billion, a low-cost estimate: even President Joe Biden has quoted an estimate that doubles the amount – more than $ 2 trillion, a figure that takes into account long-term costs such as veteran care. The interest on the debt is already running into the hundreds of billions.

A State Department spokesman told CNN that they had asked SIGAR to “temporarily” remove the reports due to “safety and security concerns regarding our ongoing evacuation efforts.” They added that SIGAR had the authority to restore them “when it deems it appropriate.”

The following are 10 notable cases, stripped of identifying details, compiled by CNN over the years.

The Tarakhil power plant was put into operation in 2007 as a backup generator for the capital, in case the electricity supply from Uzbekistan was compromised.

A large, modern structure, it ran on diesel-powered turbines, supplied by a brand-name engineering giant. There was a catch: Afghanistan had only a small supply of diesel and had to send the fuel by truck – which made the plant too expensive to operate.

The plant itself cost $ 335 million to build and had an estimated annual fuel cost of $ 245 million. The latest SIGAR assessment said it was used at best with only 2.2% capacity as the Afghan government could not afford the fuel. USAID declined to comment.

Afghanistan’s infantry needed cargo planes. In 2008, the Pentagon chose the G222 – an Italian-designed aircraft designed to take off and land on uneven runways. The first year, according to a speech given by SIGAR chief John Sopko, referring to a USAF officer, the planes were very busy.

But they would not be sustainable. The planes were first noticed by SIGAR when Sopko noticed them parked at Kabul airport and asked what they were doing there.

Six years after the purchase was launched, the 16 aircraft delivered to Afghanistan were sold for scrap for $ 40,257. The cost of the project: $ 549 million.

3) The $ 36 million Marine Corps headquarters in the desert, neither wanted nor used

Sopko said in a speech that this 64,000-square-foot control center in Helmand embodies how when a project starts, it often cannot be stopped.

In 2010, Marines increased the number of troops in Helmand, the deadliest part of Afghanistan. A command and control center at the main base at Camp Leatherneck was prescribed as part of the operation, though Sopko recalled that the base commander and two other naval generals said it was not necessary as it would not be implemented quickly enough.

Sopko said the idea of ​​returning the funds allocated to Congress “was so abhorrent to the Contracting Command that it was built anyway. The plant was never occupied, Camp Leatherneck was handed over to the Afghans who left it.”

It cost $ 36 million, was never used and appears to have been stripped later by the Afghans, who also never seemed to use it.

Major Robert Lodewick, a DoD spokesman, said in a statement that the SIGAR report contained “actual errors”, objected to how it suggested “misdemeanors” by some officers, and said the $ 36 million figure included extra costs as roads to the headquarters.

4) $ 28 million on an inappropriate camouflage pattern

A total of 1.3 million sets were ordered, costing $ 43-80 each, as opposed to the $ 25-30 originally estimated for replacement uniforms. The uniforms were never tested or evaluated in the field, and there is only 2.1% forest cover in all of Afghanistan.

As a witness, Sopko said it cost taxpayers $ 28 million extra to buy the uniforms with a patented pattern, and SIGAR expected in 2017 that another choice of pattern could have saved a potential $ 72 million over the next decade.

DoD spokesman Lodewick said the report “overestimated” the cost, and “incorrectly discredited the value of the chosen type of pattern,” adding that many of the fighting in Afghanistan took place in green areas.

The United States spent $ 1.5 million a day on drug programs (from 2002 to 2018). According to the latest SIGAR report, opium production had increased by 37% in 2020 compared to the previous year. This was the third highest yield since registrations began in 1994.

In 2017, production was four times what it was in 2002. A spokesman for the Foreign Ministry noted that “the Taliban has been the primary factor contributing to the persistence of the poppy in recent years” and “that the Taliban has committed itself to banning drugs. “

An extensive ring road around Afghanistan was funded by several grants and donors, a total of billions during the war. Towards the end of the project, a 233-kilometer-long section in the north between the cities of Qeysar and Laman resulted in $ 249 million being distributed to contractors, but only 15% of the road was built, a SIGAR audit reported.

Between March 2014 and September 2017, there was no construction on this stretch and what was built deteriorated, the report concluded. USAID declined to comment.

An extensive hotel and apartment complex was taken into use next to the US Embassy in Kabul, for which the US government provided $ 85 million in loans.

In 2016, SIGAR concluded, “the $ 85 million in loans are gone, the buildings were never completed and are uninhabitable, and the U.S. Embassy is now forced to provide security for the site at extra cost to U.S. taxpayers.”

The audit concluded that the contractor made unrealistic promises to secure the loans and that the branch of the US government overseeing the project never visited the site, nor the company they later hired to oversee the project. A State Department spokesman said they did not control the construction and that it was “a private endeavor.”

8) The fund that spent more on itself than Afghanistan

The Pentagon created the Task Force for Business and Stability Operations (TFBSO) expanded from Iraq to include Afghanistan in 2009, to whose operations in Afghanistan Congress allocated $ 823 million.

More than half of the money that TFBSO actually spent – $ 359 million of $ 675 million – was “spent on indirect costs and support costs, not directly on projects in Afghanistan,” SIGAR concluded in an audit.

They reviewed 89 of the contracts made by TFBSO and found that “7 contracts worth $ 35.1 million were awarded to firms employing former TFBSO employees as executives.”

A review also concluded that the fund spent about $ 6 million on supporting the cashmere industry, $ 43 million on a compressed natural gas station and $ 150 million on exclusive villas for its staff.

DoD spokesman Lodewick said SIGAR did not accuse anyone of fraud or misuse of funds, addressed issues of “weaknesses and shortcomings” in the audit, and said that “28 of TFBSO’s 35 projects met or partially met their intended objectives.”

9) The health institution in the sea

A 2015 report on USAID’s funding of health facilities in Afghanistan said that over a third of the 510 projects for which they had been given coordinates did not exist at these locations. Thirteen were “not located in Afghanistan, one of which was located in the Mediterranean.” Thirty “were located in a province different from the one USAID reported.”

And “189 showed no physical structure within 400 feet of the reported coordinates. Just under half of these sites showed no physical structure within half a mile of the reported coordinates.” The audit said that USAID and the Afghan Ministry of Public Health could only “supervise these facilities” [if they] know where they are. “USAID declined to comment.

A report from October 2020 presented a startling total for the war. Congress had by then allocated $ 134 billion since 2002 for reconstruction in Afghanistan.

SIGAR was able to review $ 63 billion of that – almost half. They concluded $ 19 billion of it – nearly a third – was “lost to waste, fraud and abuse.”

DoD spokesman Lodewick said they and “several other U.S. government agencies and agencies have already been identified as having challenged some of these reports as inaccurate and misleading” and that their conclusions “seemed to overlook the difference between reconstruction efforts that can have been deliberately / negligently mismanaged and the efforts that at the time of the report had simply not reached strategic goals. “