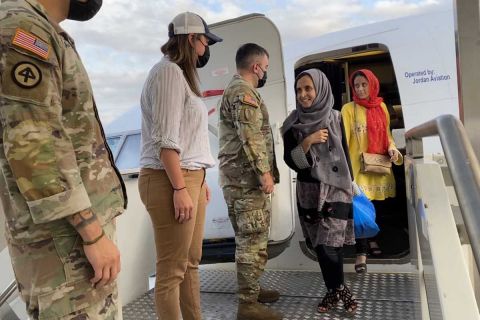 Universities are notoriously bureaucratic. Even routine purchases often require multiple quotes and a lengthy review process before checks can be printed. But now the news of the emergency had reached MSU’s top executives, who were pushing bureaucratic barriers aside.

“It was a Friday night at seven o’clock and I was talking to the top tax officer at MSU and paying for a $ 250,000 charter flight on a (credit) card,” said Tracie Carr, who at the time was the finance director of the GRAIN project.

‘Building a Bridge’ to Life in the United States

The group’s first days in Albania were marked by relief at being alive and safe. But now, a month after their stay at a hotel near the capital Tirana, it has become difficult not to dwell on their uncertain future.

They have applied for U.S. visas, but are told the process could take up to two years as the U.S. government works to place an initial wave of nearly 37,000 refugees in U.S. host communities, including 1,280 in Michigan.

On a zoom call with the group shortly after arriving in Albania, Slotkin told the news of the lengthy investigation process ahead and the likelihood that the refugees would stay in Albania for some time.

“They asked us, ‘How can we use the time?'” Slotkin said.

The GRAIN refugees join countless other Afghan scholars and other workers whose personal and professional lives are now in limbo.

An international nonprofit organization, Scholars At Risk, which helps academics escape persecution in their home country by moving to sponsor universities in the United States, has received more than 800 applications for assistance since August, said Joyce Pisarello, the group’s director of membership and university relations.

These are more applications than the organization typically processes in an entire calendar year.

“The numbers and influx have just been overwhelming,” Pisarello said.

The MSU team, meanwhile, has shifted focus, Richter said, to “trying to build a bridge for people that allows them to prepare for life in the United States.”

But even that is fraught with complications.

GRAIN’s US funding was linked to food research work in Afghanistan. So the MSU team is working to get special approval from USAID to continue paying staff while they are in Albania.

Those who were midway through their master’s degree at Kabul University are likely to have to start all over again. The MSU team is looking for alternative programs in Albania, but many of the GRAIN researchers will need intensive language training before they can study in an English-speaking classroom.

Resettlement in the United States will bring new challenges.

“We are confused about the future,” Qaderi, the targeted researcher, told Bridge. “We do not know how long it will take to process our cases or when we will come to America.”