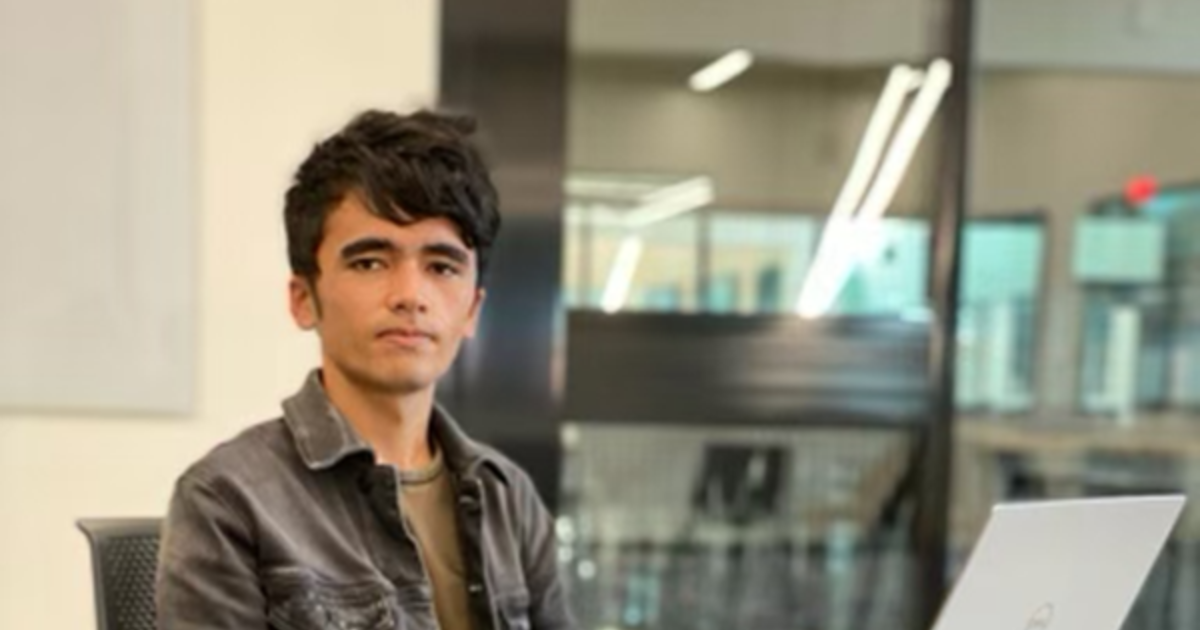 Zabi clearly remembers the hunger and thirst he felt after going two days without food and water in the Malaysian jungle. He still remembers how he slept on the streets of an Indonesian city, as well as the grim detention center for migrants where he was detained for several months.

After fleeing war-torn Afghanistan as a 13-year-old in 2015, Zabi embarked on a years-long odyssey through three countries without his family. He eventually ended up in a shelter for migrant children in Indonesia, where he lived for more than three years.

The United States, the only country with a refugee program for unaccompanied children, welcomed Zabi in 2019. He quickly learned English and graduated from an American high school. In August, Zabi began his first year at Western Michigan University.

“I was so lucky. I could not believe it. It was a dream,” Zabi, now 20, told CBS News. “People lost their hope and I lost my hope of getting out of Indonesia.”

His own refugee journey is over. His American dream has just begun. But Zabi is now experiencing desperate attempts to help his mother and four siblings, who recently fled Taliban-controlled Afghanistan, become refugees in neighboring Pakistan.

When the Taliban recaptured Afghanistan this summer, the United States evacuated tens of thousands of Afghans, including those who helped U.S. forces, family members of U.S. citizens and residents, and others considered at risk. It is currently working resettle more than 70,000 of them in communities across the United States

But countless vulnerable Afghans with American affiliation – including Zabi’s family – were not evacuated and are now stranded in Afghanistan or neighboring countries, desperately looking for a way to be resettled in America.

They include family members of Afghans in the United States; those who assisted U.S. forces and have pending special immigrant visa applications; and other vulnerable groups, including journalists and members of the LGBTQ community.

Since July, Afghans abroad have filed more than 28,000 applications for parole, a process that allows visa-free immigrants to enter the United States on humanitarian grounds, according to government figures. The United States typically receives less than 2,000 probation requests per year.

The State Department has also received 10,700 referrals to a special refugee designation created by the Biden administration in August to resettle Afghans working for the United States, U.S.-funded projects and U.S.-based organizations, including news media.

But Afghans hoping to come to the United States under these legal routes will have to leave Afghanistan to undergo treatment by U.S. consular officials in third countries – a requirement that the State Department admitted is “extremely difficult” for many.

Zabi said he now understands his family’s decision to get him to leave Afghanistan seven years ago. “No one leaves their child, a 13-year-old, and sends them on a boat alone to travel to the other side of the ocean if the water is no safer than the land,” he said.

Zabi remained in communication with his family. But to avoid worrying family members, he said he refrained from telling them about many of the difficult experiences he endured during his years in Southeast Asia.

He did not tell them about being detained at an airport in Kuala Lumpur or mentioned that he reached Indonesia on a boat after being chased by Malaysian authorities. He did not tell them he was sleeping outside an immigration office in Pekanbaru, Indonesia, for two weeks.

Zabi also did not mention his transfer to a detention center for adult migrants, where he remembers not being allowed to go outside for three months. “I kept lying and lying and saying I’m fine, everything is fine,” he recalled.

Spending years at the shelter had a profound mental health impact on Zabi and the other boys, he said. Zabi remembered waking up one morning and seeing the lifeless body of another refugee boy who had hung himself.

“We were friends,” he said. “We cared about each other.”

The incarceration, Zabi said, was exacerbated by persistent concerns about his family’s safety. In late 2018, he said he lost all contact with his family for a month after Jaghori, their home district, was attacked by Taliban militants and forced them to flee to Kabul.

Zabi found solace in playing football, learning English through YouTube and Facebook videos and interpreting for other Afghan refugees. “If I did not do any of that, I would have been mentally ill,” he said. “I would not have been able to survive.”

In 2018, Zabi was notified that the United States had chosen to resettle him – news he described as “a flickering light at the end” of a “long tunnel”. After more than a year of interviews, paperwork, medical checks and vaccinations, Zabi arrived in Michigan in June 2019.

Zabi came to the United States through a little known program who resettle refugee children stranded in third countries without their parents and place them in nursing and group homes in the United States. He was one of the few unaccompanied minor refugees admitted during the Trump administration who made dramatic cuts to refugee admissions.

When the US-backed Afghan government collapsed in August, Zabi attended his briefing at Western Michigan University in Kalamazoo. He was overwhelmed.

After all, studying at an American university seemed like a dream when he traveled through Southeast Asia as a young teenager. Within two years, Zabi had learned English, graduated from a high school in Michigan, and earned a full-time scholarship.

But Zabi could only think of his mother and siblings, whom he could not contact for several days. When he did, Zabi learned that his family had fled to the border with Pakistan.

“I went through so much mentally,” he said. “At one point, I thought I could not.”

To help his family find a way into Pakistan, Zabi sold his car, which he had been able to buy after working a full-time factory job in Ada, Michigan, while still in high school.

His mother, three sisters and younger brother – two of whom are minors – are now in Quetta, Pakistan. Zabi believes they could be harmed if they return to Afghanistan and has explored ways to bring them to the United States

Zabi helped his family register with the United Nations High Commissioner for Refugees, which refers cases to the United States. But their resettlement through the U.S. refugee program could drag on for more than a year, as cases typically take between 12 and 18 months to process.

He also recently submitted requests for humanitarian probation, which could allow his family to come to the United States more quickly. But the U.S. Citizenship and Immigration Services have approved just over 100 of the requests they have received from Afghans abroad, according to the agency’s data.

In order to bring his mother and siblings during the probation process, Zabi must also prove that he will be able to support them financially here. But Zabi is now a full-time student and unemployed. “I do not have the resources,” he said.

“All his life, things have happened to him, and he’s worked so hard to be here, and yet other people still take priority in his life,” said Tori Grant, Zabi’s case manager at Bethany Christian Services, the group that resettled him. “I think it shows how compassionate he is.”

Zabi has considered giving up his studies – and his scholarship – in order to return full-time. He admits that the opportunity scares him. He knows how much he endured and how hard he worked to reach that point.

But Zabi also knows what it is like to be forced to leave his homeland. He knows what it feels like to be a refugee in a foreign country. And for him, helping his family is the clear priority, even if it means postponing his American dream.

“I would not forgive myself if I did not,” he said. “Family comes first.”