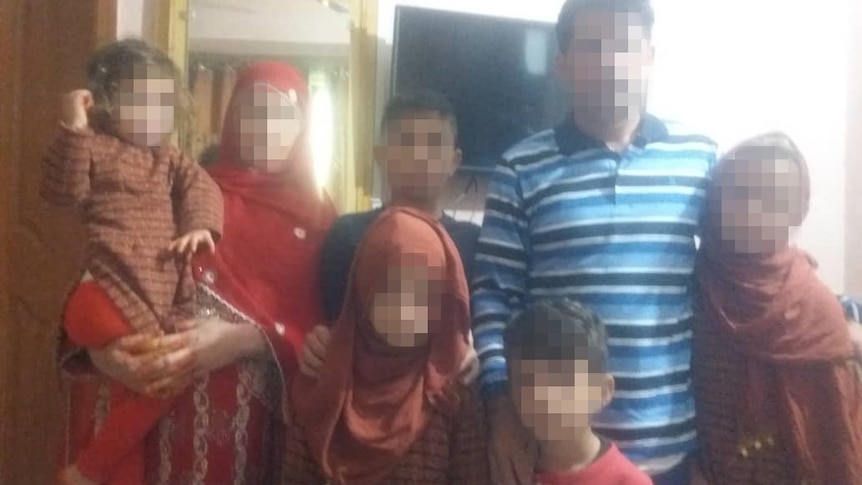 Former Afghan interpreters are being forced to make an impossible decision, to leave their families or risk losing the chance of a new life in Australia.

Ahmid * flew to Australia from the Pakistani capital, Islamabad last Thursday, leaving behind his wife and five children under the age of 10. The Drum spoke to him from hotel quarantine in Sydney.

“They are crying and I am also very unhappy. I lost my hope (sic), it is a very difficult time.”

Ahmid served in the Australian Defense Forces in Uruzgan between 2010 and 2011.

As the Taliban advanced through Afghanistan in July and August, many former ADF interpreters, already identified as eligible for a visa under the so-called Locally Engaged Employee (or LEE) program, were issued 449 emergency visas to facilitate their evacuation. The Drum understands that the vast majority of visas contained the names of wives and children.

But in the chaos of the withdrawal in late August, after the Taliban captured the capital Kabul, Home Affairs asked Australian consulates in other countries to help issue 449 visas.

Ahmid is one of an unknown number of interpreters whose visas were issued by Australian immigration authorities in Jakarta, Nairobi and China.

Ahmid received his visa notification from Australian immigration in China on 25 August. It stated that he “and all immediate family members with Australian visas, which you have already identified to us, should go to the airport”.

But that included a devastating omission that indicated only the primary applicant – his name – and not his family. This is despite the fact that Ahmid has previously listed the names of his wife and children in certification documents provided to the defense.

Either way, the visa came too late. Ahmid was already in hospital recovering from a gunshot wound after allegedly being shot in the leg by a Taliban guard while trying to enter Kabul International Airport.

Australia’s last evacuation plane departed the day after his visa was issued, just hours before suicide bombers targeted the airport’s perimeter and killed at least 183 people.

Family names are missing in visas issued by Australian consulates

He believes the names of family members have omitted their visas due to lack of communication between Home Affairs and Australian consular staff.

“These men are presented as family units and they have already been identified as such by the defense, I do not understand how they could have been left out,” he said.

Sir. Scanes say only a handful of interpreters were evacuated before Australia’s rescue mission ended. He questions decisions made at the time when several high-profile evacuees were aired from the affected nation.

“Instead, a last-minute advocate for 100 athletes was prioritized and picked up while interpreters wearing our uniforms and our assisted troops were left behind,” he said.

The advice to 449 visa holders left behind in Afghanistan was to stay home and await further instructions.

But in the intervening months, the situation for many has become more and more intolerable, with the Taliban moving from house to house attacking and killing former Afghan national army soldiers and people who helped coalition forces. At least one former ADF interpreter is known to have been murdered.

An impending deadline only exacerbated their concerns, as the 449 visas were scheduled to expire three months after they were issued.

Afraid that they would miss it, Ahmid decided to flee overland to Pakistan with his wife and five children in early November. But the Australian High Commissioner for Islamabad refused to treat his family because they were not listed on Ahmid’s original 449 visa issued by the Australian Consulate in China.

So last week, a few days before they expired, Home Affairs announced they would extend the 449 visas by a further 12 months.

Sir. Scanes said the government was finally in the process of speeding up the evacuations after months of little or no contact with interpreters.

“They were forced to make it desperate to come to Pakistan because they thought their visas would expire,” he said.

“It has been an absolute accumulation of bureaucracy … it really contradicts what the government is saying is their priority, which is women and children.”

Jamie *, another former interpreter, also made the treacherous trip to Pakistan with his wife and one-month-old baby daughter.

He completed his biometric test at the Australian High Commission in Islamabad on Friday.

He has been told that his wife and baby will not travel with him, because like Ahmid, none of them were listed on his visa.

They have since returned to Afghanistan, but Jamie says he has no choice but to continue his journey to Australia.

“Everyone in my area knows they’ve been working [for] and supported the coalition forces and the ADF, “he said.

“The [the Taliban] can do anything and they’re killing people right now. ”

Chased by the Taliban

Meanwhile, hundreds of other interpreters remain in hiding in Afghanistan after following the government’s advice to stay put.

Zaland * is among them. His LEE visa was issued in August, giving him and any family members the right to become permanent residents of Australia and apply for citizenship.

Zaland waited two and a half years for this privilege, during which time he married. When his visa was issued, his wife was heavily pregnant with their first child.

But he had not updated his application to include his growing family and was unable to convince authorities to let them board an evacuation plane in August.

Zaland’s wife gave birth to a baby girl in Kabul on October 17.

“I have no salary at the moment, so I had no money to pay for my wife and daughter’s treatment,” he said.

“I had to take them to a state hospital where they had no oxygen and no medicine.”

On Friday, he finally received a call from the Home Office telling him that he and his wife will be prioritized for a flight to Australia. No date has been set for their departure.

Like many others, Zaland has been forced to move from house to house to avoid being discovered by the Taliban.

“We stayed with my father for a while, and then with my uncle, but he said it was not safe,” he said.

“I believe in them [the Taliban] will come and take me, this is happening all the time. We see many corpses appearing in the river. “

Days after Kabul fell to the Taliban in mid-August, the Australian government announced that 3,000 seats would be offered exclusively to Afghan nationals during their 2021 humanitarian program.

According to Home Affairs, this allocation is separate from Afghans who have come to Australia on 449 visas.

But last week, a Senate inquiry heard that not one of those humanitarian visas has been issued, despite the government receiving more than 26,000 applications.

Today, the Prime Minister reiterated his government’s commitment to helping the people of Afghanistan.

“It’s our top priority in the refugee and humanitarian program … we are all working on what is a very challenging topic,” he said.

In a statement, the Interior Ministry said it was not discussing individual cases but that they were aware that a number of Afghans on temporary 449 visas had left Afghanistan via national borders and that the government would provide assistance to them where possible.

* Names have been changed to protect identities.

The Drum airs weekly on ABC and the News Channel.