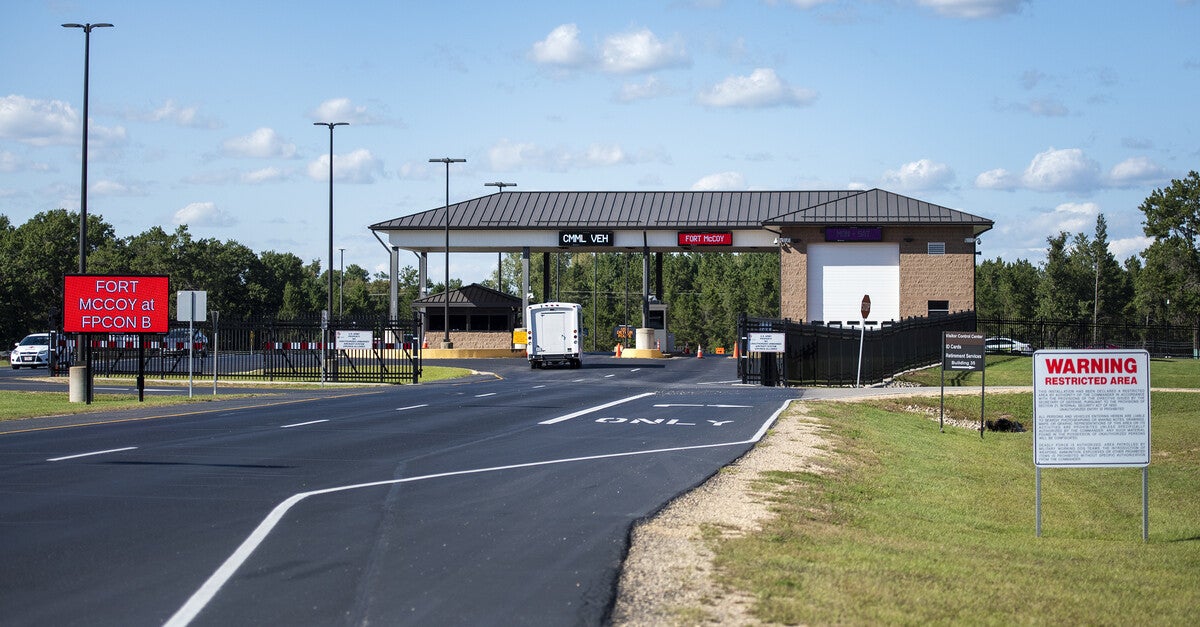 Four weeks later Evacuated from Afghanistan began arriving at Wisconsin’s Fort McCoy, a federal official at the base says they are preparing for a large number of people to begin leaving and settling across the country.

Skye Justice, the U.S. State Department’s team leader at the Fort McCoy Cross-Organizing Task Force, said the Monroe County base is currently close to capacity, and officials have so far focused on meeting the immediate needs of Afghans, including medical care for those with serious health needs and legal assistance when filling out immigration documents.

“The exact amount of time a family will spend in Fort McCoy will vary from family to family. But we are now at a time in Fort McCoy where we expect a larger number of people to start leaving the fort,” he said. Justice.

Justice did not say how many people have left the base so far, or what the pace of departures will be.

Most evacuees arrived in large groups by military or charter aircraft at Volk Field. Justice said they will leave the base for their new home with their family unit or as individuals, some using local airports.

Sponsors in their new communities, supported by regional and national nonprofit organizations providing resettlement services, will welcome families and help them start their new lives.

“Everyone wants help with housing, securing a place to live, their immediate need for food,” Justice said. “Sponsors cook for them and take them to the grocery store. They help ensure that they are received and decorated in their new community, that they know things like where to find the bus or where the local schools are located. “

Mary Flynn is the program manager for Lutheran Social Services in Wisconsin and Upper Michigan, one of the agencies that will support the 399 Afghan evacuees expected to be resettled in Wisconsin. Flynn said her organization has already begun work on a resettlement case, though they do not come from Fort McCoy. She said she is not surprised that it has taken longer than officials first estimated to get people to the resettlement stage.

“For me, it is not unusual that it will take some time. So I think they want to do it right and they do not want to rush it, “Flynn said.

Flynn said her organization has worked to find and prepare local community groups such as churches to support the refugees when they arrive. She said they have seen a stream of support, but it requires some preparation before sponsors understand how best to help the newcomers.

“We want them to understand that we do not expect them to adopt families. We really want helpers to teach people so that there is no long-term dependence on the welcome group. We want them to help them learn to ride the bus that teach them how things work in the United States, “Flynn said.

Dawn Berney, executive director of Jewish Social Services in Madison, said her group has also received community support. One roadblock that her group is facing is finding people who speak Pashto or Dari, Afghanistan’s main language, and who will be willing to help translate.

“There are not very many people who can act as interpreters, and I do not have staff who speak these languages, so communication becomes much harder, much slower. Google Translate is good, but it’s just not that good,” Berney said. .

All Afghans staying at military bases like Fort McCoy already have legal immigration status in the United States. But many people have arrived under an unusual status called humanitarian probation. This has led some people working in the resettlement of refugees to question whether the arrivals will be entitled to all the benefits typically offered to refugees, such as access to the supplementary nutrition assistance program while seeking work.

“It worries us because they were evacuated to the United States during some really traumatic situations,” Flynn said. “We remain hopeful and optimistic that our country will get through and do what is necessary to ensure that they get off to a good start after everything they have gone through.”

A State Department spokesman said in an email that the agency had “requested legislation from Congress” to make federal benefits similar to those received by refugees or special immigrant visa holders available to those with humanitarian probation status.

Justice said the large number of people to be resettled is “historic” and that the federal government is still looking for more assistance from people who can act as sponsors or help refugees find work.

“Because so many people were evacuated from Afghanistan in such a short time, it underscores the system that normally receives refugees in the United States,” Justice said. “That’s why we’re organizing a national effort to make sure every family that has arrived in the United States has a sponsor gets off to a really good start in the next chapter of their lives.”

He said people interested in signing up to help should go to Welcome.us, a new public-private partnership.

Justice said many of the people at Fort McCoy already have a support network here in the United States because they or their family member worked for the U.S. government or a U.S. organization in Afghanistan.

“I met a gentleman the other day who has a job offer in Washington DC. I met a journalist who is going to do a scholarship program out in California. So part of what we do is make sure the people who have networks in particular share of the country are able to travel and start their new life, ”Justice said.

He said the base also received many family members of U.S. citizens or legal residents, and they are working to reunite them with their loved ones.

For those without personal or professional connections here, Justice said officials will make sure they have sponsors who can help deliver this network.

Justice said Fort McCoy could end up receiving more evacuees if the base has capacity when they arrive in the United States from overseas transit points. But he said so far that officials are focused on the evacuees who are already at the base.

While many people are stepping forward right now to help, Berney said it will be a long-term process to help Afghans settling in Wisconsin feel part of their new community. She hopes volunteers will continue to look for ways to help once the immediate crisis is over, or consider helping refugees from other countries arriving in the state during the year.