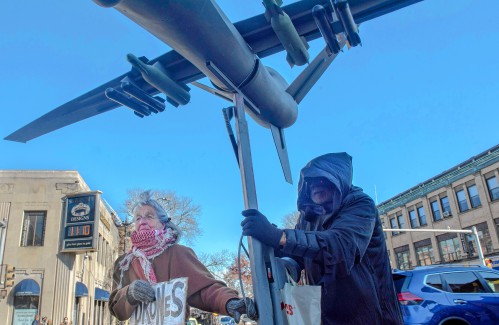 NORTHAMPTON – A replica of an unmanned aerial vehicle used by the U.S. Air Force was pushed down and across sidewalks by the mythical figure most synonymous with death, the Grim Reaper.

City resident Nick Mottern wore the dark hood and drove the copy of the MQ-9 Reaper through downtown Northampton near the front of the former Hampshire County courthouse as part of a “Do Not Look Away” protest in support of justice for the Ahmadi family , who was killed in a Reaper drone strike in Afghanistan on August 29. The motter was joined by 10 others who called for immediate payment of compensation to the Ahmadi family as well as the release of all videos and documents related to the 29th of August. attacks to determine who was responsible for the deaths of the Ahmadis, possibly including President Biden.

“What we’re trying to do is let people know that drone warfare is still going on,” Mottern said.

Originally, the US military had claimed that the Kabul drone attack destroyed a car operated by an ISIS-K sympathizer, which allegedly contained explosives, and described the attack as “self-defense”. But independent investigations by The Washington Post and The New York Times questioned the allegations, as both newspapers were unable to find evidence of explosives in the car, led by Zemari Ahmadi, an engineer working for the American nonprofit. aid organization Nutrition and Education International, which aims to eliminate malnutrition in Afghanistan, according to a report by National Public Radio.

In September, the U.S. military withdrew, saying it had made a “tragic mistake.” The drone attack killed 10 members of the Ahmadi family, including seven children.

The protest was supported by a collaboration between the Traprock Center for Peace & Justice; Continuation of the Peace Task Force of the Political Revolution; Resistance Center and its Demilitarize Western Mass Campaign: Vigil to Stop the Wars; and Bankillerdrones.org, which Mottern helped coordinate.

The MQ-9 Reaper is the primary offensive attack of unmanned aerial vehicles for the U.S. Air Force, according to military.com. The Department of Defense describes the MQ-9 as 36 feet long, 12.5 feet high and as having a 66-foot wingspan and carrying up to four AGM-114 Hellfire missiles.

Several of this morning’s participants were longtime protesters who have been protesting war for more than three decades, like Charlie Peck of Springfield. About once a week, Peck said he was protesting against war in front of the old courthouse.

Similarly, Andy Larkin from Northampton has joined others like Peck since retiring in 2005.

“I come regularly to give my voice to what I consider an important issue – how we waste money and spend money on war, and we could spend that money on social services,” Larkin said. “It’s just a gentle reminder here that we think it’s wrong.”

Paige Bridgens from Northampton who put up a sign with “Drone Killing Takes No Holidays!” said she felt Saturday was a particularly important topic to stand up for. Bridgens also felt that drones in mainstream culture were being normalized, but believes that it should not be.

“I feel very strongly that we should not fund this and it should not happen,” she said. “I hope people walk away with an increased awareness and that people will stand up to say no.”

The Northampton Protest was one of 11 protests across the United States from November 27 to November 29. Other protest sites were in New York, Iowa, Virginia, California, Wisconsin, Missouri, Tennessee and Hawaii.

In addition to seeking justice for the Ahmadi family, the group was protesting against military defense contractor L3Harris, who has a factory in Northampton that makes optical targeting systems. At its other locations, the company makes surveillance cameras and missile launch systems for the MQ-9 Reaper, like the one that killed the Ahmadis, according to Mottern.

“I hope people will be aware that drone warfare is still going on and that drone killing is war and we are at war,” Mottern said.

Emily Thurlow can be contacted at ethurlow@gazettenet.com.