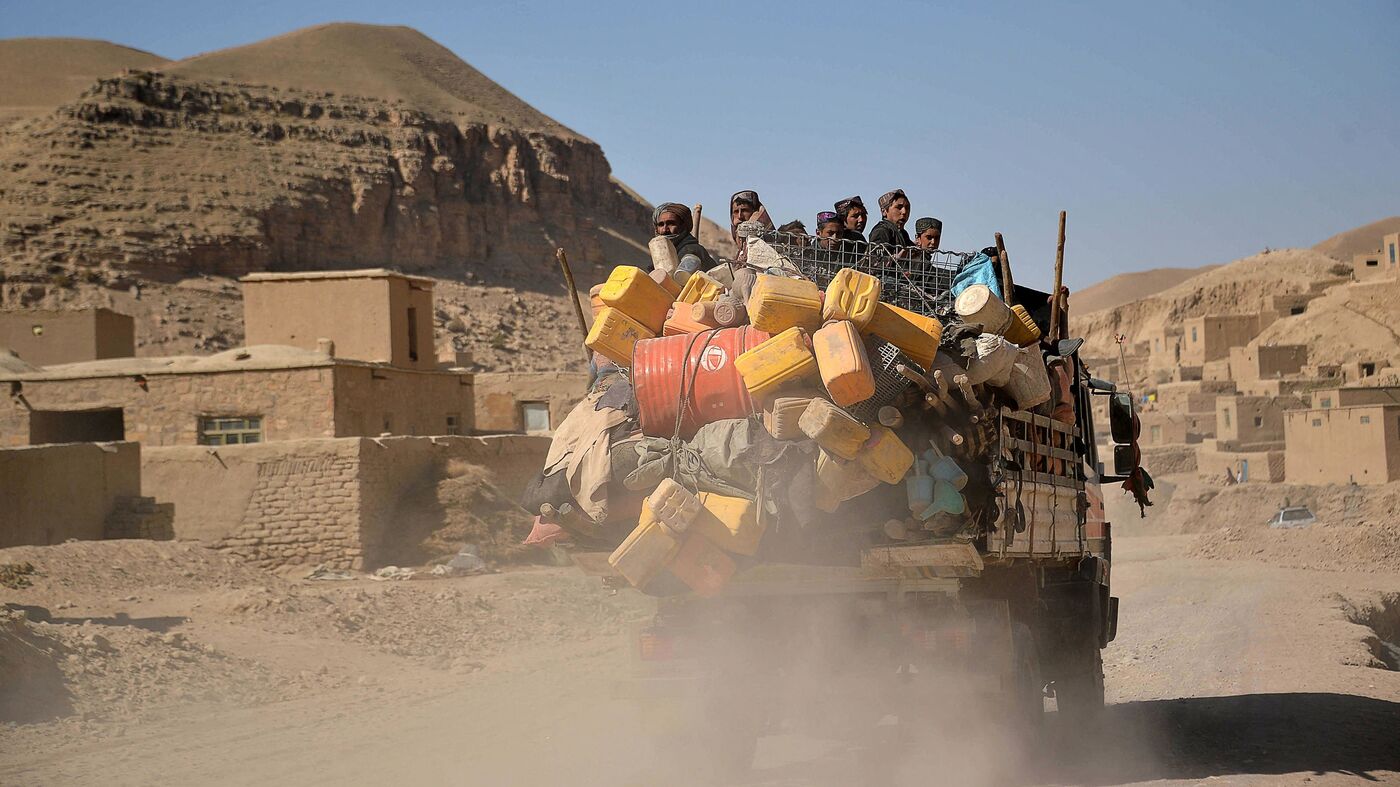 Richard Trenchard was in western Afghanistan this week talking to farmers and shepherds. And what he heard is bad.

RICHARD TRENCHARD: I talked to farmers who had lost 80, 90% of their crop. Pet owners are similarly forced to sell their animals, or they see their animals die due to lack of pastures, lack of food.

KELLY: Trenchard is the country director of the United Nations Food and Agriculture Organization in Afghanistan. He said he met whole families forced from their land by a brutal drought. They slept on the streets of the city of Herat in freezing temperatures.

TRENCHARD: It was little kids. It was older children. It was mothers, grandmothers, fathers. It’s really hard. No one wants to choose it. You do this when you have absolutely no choice but to go.

KELLY: The UN says more than 23 million people in Afghanistan will face acute food insecurity in the coming months. That’s more than half the population.

TRENCHARD: Your whole day has been spent thinking about where to get the next meal from. You skip meals. Maybe your kids eat, but you do not. And you sell everything you have.

KELLY: And the consequences of this crisis are showing up in Afghan hospitals. Jane Ferguson, a special correspondent for “PBS NewsHour,” saw it firsthand on a recent reportage tour.

KELLY: CONSIDER THIS. In Afghanistan, droughts, political upheavals and economic collapse have created a perfect storm for a humanitarian crisis.

It’s CONSIDER THIS FROM NPR. The crisis in Afghanistan was kicked off by a drought, the worst in more than 30 years, according to UN Richard Trenchard. But it was not just a drought. There were months of intense fighting this year that displaced more than half a million people, bringing the total number to more than 4 million. Then there is the economy.

TRENCHARD: In the last two, three months, we’ve had this economic implosion, which’s caused a total liquidity crisis. The banks are not working. The business is not working.

KELLY: Afghanistan’s economy was already fragile, heavily dependent on international development aid. After the United States withdrew from the country and the Taliban took over, many of these funds were put on hold. The IMF suspended hundreds of millions of dollars in aid, citing questions about the legitimacy of the Taliban government, as did the World Bank, which said it was monitoring the transition and worried about what it meant for women. And the United States froze $ 9.5 billion of assets belonging to Afghanistan’s central bank. Here’s Trenchard.

TRENCHARD: The suspension of so much development aid, which had supported so many vital services in the last few years in health, education, including agriculture – so all those things together mean that a really bad drought crisis has now become something much deeper, far more complex. And it’s a national crisis now.

KELLY: Another person who has seen all of this on her own, Jane Ferguson, “PBS NewsHour” special correspondent. She has visited Afghan hospitals and heard the stories of families she met there. She spoke with my co-host Audie Cornish about her reporting.

AUDIE CORNISH, BYLINE: I know you were actually able to talk to parents. What do they tell you about this experience?

FERGUSON: Many people in Afghanistan and the parents you meet at these hospitals are families supported by someone who may have had day jobs. A casual worker would have worked hand-to-mouth day to day. And the trickle-down effect or the stiffening of the financial collapse has meant that that kind of work has dried out. You know, construction sites and waste collection, that kind of thing – if you look at a population that was already extremely poor, even by Afghanistan’s standards, that’s what my parents tell me. That’s what you know they were just able to feed themselves before. They had no safety net that would be savings or a line of credit or some family that could help. It does not exist for millions of Afghans.

On top of that, you also have the hospital staff, middle class, educated Afghans who have not been paid for months, so even they are struggling to feed their children. So it is in fact a complete cash nut – also worth mentioning that even though one has savings in the bank because the country’s foreign assets have been frozen in an attempt to ensure that the Taliban do not have access to them, banks in Afghanistan have strictly adopted strict capital controls. You can only get $ 200 a week out of your bank account, so even if you have money in the bank, you can not access them.

CORNISH: Winter is falling in the countryside. There are many people who are now at risk of being exposed to freezing temperatures. I know you talked to a Taliban leader. What do they say? I mean, they must be under some pressure just to feed people.

FERGUSON: They’re under tremendous pressure. You know, if they can not deliver, if they end up having to take ownership of a famine, it’s a catastrophic situation for them. They have largely set their best footing for the international community and said, look, we are open to aid workers. We would like to welcome all people who are trying to help the Afghan people. You know, it’s a big 180, of course. For the past 20 years, they have relentlessly killed, attacked, kidnapped both Afghan and foreign aid workers and failed to recognize the humanitarian work or neutrality of humanitarian workers. So they are putting a big push in trying to get the aid organizations back in because they are well aware that the public support will not be there for them. No matter what public support they have – it is very difficult to assess – it will be completely flat if they can not lead a functioning country.

They are also well aware that they have not fed their own soldiers. The Taliban fighters occupying these cities across the country are not getting paid. It’s a very dangerous situation – to have men with guns and hungry stomachs. So they are well aware that this situation can develop. As you say, winter is on its way and in Afghanistan the winters are incredibly brutal. Especially in the northern part, in the capital of Kabul, you get snowfall in the mountains. So people get desperate. Their ability to buy fuel, to stay warm, has never been more stretched across the country. Every year in refugee camps, one gets deaths from young children who die of hypothermia, even in the best of times. This winter is likely to be extremely bitter.

CORNISH: We started this conversation with your reporting in a pediatric ward, which will always be a tough task – right? to testify. Were there any signs of hope there or even in the country you are getting away with?

FERGUSON: You know, it’s funny you have to ask about it, because I was just sitting down yesterday and today to write a script for our next piece, and I used the word hope because I visited a place that always has, over the years of reporting in Afghanistan, given me hope, as was the Red Cross Center in Kabul. You know, a ray of hope is that we must at least remember that the fighting, for now, has stopped. A lot of very outrageous and scary things are happening in Afghanistan right now, but at least the quote, the quote, the “war fighting” is pretty much over. What this has meant is that people who otherwise would not have been able to access the city, who could not travel on the treacherously dangerous roads due to IEDs, checkpoints, bandit – it has actually opened up for people.

So when you went to the Red Cross Center in Kabul, where they fitted people with high-quality free prostheses for amputees and people with disabilities – and what I saw when I came in were Taliban fighters, former government soldiers and civilians who everyone sat together. , to learn to walk again, try to get better dentures, just try, in a time of peace, to be healed. And I think we need to remember that the only bright ray of hope for now is the lack of fighting, the lack of violence at the war level. I do not know how long it lasts, but I can feel, in some rural areas, that people are starting to breathe.

Copyright © 2021 NPR. All rights reserved. Visit our Terms of Use and Permissions website at www.npr.org for more information.

NPR transcripts are created on an urgent deadline by Verb8tm, Inc., an NPR contractor, and produced using a proprietary transcription process developed with NPR. This text may not be in its final form and may be updated or revised in the future. Accuracy and availability may vary. The authoritative registration of NPR’s programming is the audio recording.