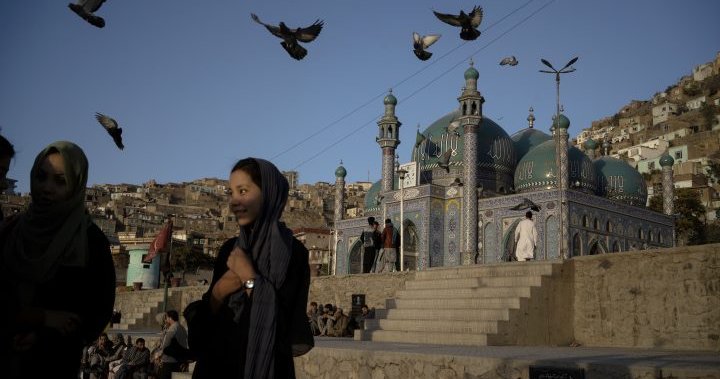 The Canadian government has quietly changed the criteria on its website for a special program for vulnerable Afghan refugees so that only those who have already managed to flee to other countries are eligible.

At a hotel in Islamabad, Afghans who worked for the Canadian military are waiting for a new life

The program is one of two set up to help bring 40,000 Afghan refugees to Canada and is aimed at vulnerable groups, including female leaders, persecuted religious or ethnic minorities, LGBTQ people and journalists.

The online criteria for the second program, which is aimed at interpreters and others who assisted Canada during its military mission as well as embassy staff, still allow those in Afghanistan to apply.

When the government first announced the special humanitarian program in August, it said it would apply to those outside Afghanistan, but it ultimately included those stuck in the war-torn country in its online criteria.

3:25
Fear for the future of women in Taliban-controlled Afghanistan

Fear of the future of women in Taliban-controlled Afghanistan – October 15, 2021

The government said Monday that the change to the website was a “communication rather than a policy change.”

Alex Cohen, a spokesman for Immigration Minister Marco Mendicino, said Canada will continue to do its utmost to help vulnerable Afghans inside and outside the country.

Since the Taliban captured Kabul and took control in August, it has been increasingly difficult to get people out.

Canada completed its air bridge mission from Kabul in late August as the United States was completing its own withdrawal from the country. Thousands of people with permission to travel to Canada were left behind – including Canadian citizens.

Groups working with Afghans trying to flee the country said changing the criteria for the humanitarian program on Canada’s official website would create confusion and desperation among Afghans hoping to come to Canada.

The website is the source of authoritative information on who is eligible, saying only those outside the country are now qualified – while until mid-October it said they were qualified in Afghanistan – could get Afghans to resort to human traffickers , they warned.

Stephen Watt of Northern Lights Canada, a refugee organization, said the government’s plan to bring 40,000 Afghans to Canada has been shrouded in secrecy ever since it was announced.

“There is still no clear way to apply for the program or find out who it accepts or how it works,” he said. “This is a matter of life and death for many of the people we talk to in Afghanistan.

“Our government needs to clear up its plans for these very vulnerable people, which it promised to help in the heat of the election, and provide a clear path to provide that help. This is not a time for empty promises and secret processes. ”

Canada sending aid to Taliban-led Afghanistan is a ‘dilemma’ for leaders, experts say

Wendy Noury ​​Long, director of the Afghan Interpreters Association, said she feared the change, made in mid-October, would cause desperate Afghans to go to extreme lengths to get out of the country, so they qualify sig.

“People want to think, how do I get out? Do I contact human traffickers? Countries are actively deporting people back to Afghanistan,” she said.

“This is a policy change. This is the explanation for whether you are qualified. You take a huge risk of trying to get out to another country and you could be deported back to Afghanistan.”

Canada’s humanitarian program, set up to help Afghans in danger, has strict eligibility criteria. To qualify, Afghans must also be a female leader, a human rights activist, a member of a persecuted religious or ethical minority, in the LGBTQ community, or a journalist or someone who has helped Canadian journalists. From mid-October, they should be located outside Afghanistan.

Those who meet these criteria must register for refugee status with the United Nations High Commissioner for Refugees or the government in which they live and wait to be referred under the program. They can also be identified as eligible by a private sponsor.

About 3,700 Canadians and Afghan refugees, including former interpreters, were aired out of Canada by the end of August.

Approximately 1,700 interpreters and other Afghans with papers to come to Canada are currently in safehouses in Kabul. Some safehouses run by an NGO and funded by veterans and private donations are facing closure within a few weeks due to lack of funding.

Defense Minister Harjit Sajjan announced on Friday that Canada will resettle up to 322 more Afghans who have helped NATO countries.