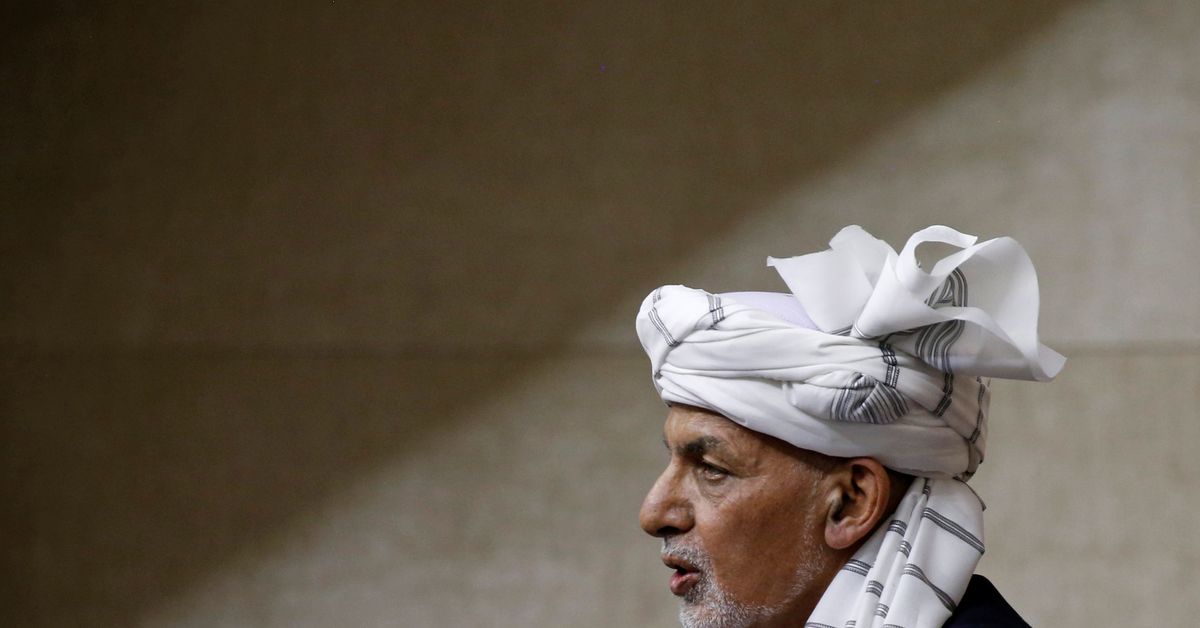 KABUL, August 15 (Reuters) – Afghan President Ashraf Ghani on Sunday left the presidential palace in Kabul to the rebellious Taliban fighters who had overthrown his government in a matter of weeks, saying he wanted to avoid bloodshed.

Twice elected president, both times after bitterly controversial contests, the former World Bank graduate left the country without saying where he was going. Al Jazeera later reported that he had flown to Uzbekistan.

“To avoid bloodshed, I thought it would be better to go,” he said on Facebook in his initial comments.

Ghani was first elected president in 2014 and took over from Hamid Karzai, who led Afghanistan after the US-led invasion in 2001, overseeing the end of the US combat mission, the almost complete withdrawal of foreign forces from the country, and a violent peace process with the rebellious Taliban.

As an increasingly isolated figure, he made efforts to end decades of war a priority, despite the Taliban’s continued attacks on his government and security forces, and began peace talks with the rebels in Qatar’s capital, Doha, in 2020.

But foreign governments were frustrated by the slow progress of the negotiations and his increasingly stinging reaction, and calls for an interim government to replace his administration grew.

During his presidency, he succeeded in appointing a new generation of young, educated Afghans to leadership positions at a time when the country’s power corridors were occupied by a handful of elite figures and protectionist networks.

He vowed to fight rampant corruption, rectify a crippled economy and turn the country into a regional trading center between Central and South Asia – but was unable to deliver on most of those promises.

An American-educated anthropologist, Ghani, 72, holds a doctorate from New York City’s Columbia University and was named one of the “World’s 100 Best Global Thinkers” by Foreign Policy magazine in 2010.

His path to the presidency was fiercely fought.

He spent nearly a quarter of a century outside Afghanistan during the tumultuous decades of Soviet rule, civil war, and the Taliban’s years in power.

During that time, he worked as an academic in the United States and later at the World Bank and the United Nations across East and South Asia.

Within months of the events of the US-led invasion of Afghanistan, he withdrew from his international posts and returned to Kabul to become senior adviser to the newly appointed president, Karzai.

He served as Afghan finance minister in 2002, but came into conflict with Karzai, and in 2004 he was appointed chancellor of Kabul University, where he was seen as an effective reformer and formed a Washington-based think tank working on policies to strengthen some of the world’s poorest people.

In 2009, Ghani, who belongs to Afghanistan’s majority of Pashtun ethnicities like Karzai, ran for president, but came in fourth and secured about 4% of the national vote.

He continued to work in key roles in Afghanistan, including as Afghanistan’s “transitional tsar” as chairman of a body overseeing NATO’s security transition to Afghans.

With Karzai barred by the Afghan constitution from running for a third term, Ghani launched a successful second campaign in 2014. He was re-elected in 2019.

His relations with Washington and other Western capitals were turbulent.

He was a vocal critic of what he called wasted international aid in Afghanistan, and he often did not face the West’s Afghan strategy, especially as it seemed to accelerate a slow and painful peace process with the Taliban.

In an interview with the BBC, Ghani said: “The future will be determined by the people of Afghanistan, not by anyone sitting behind the desk dreaming”.