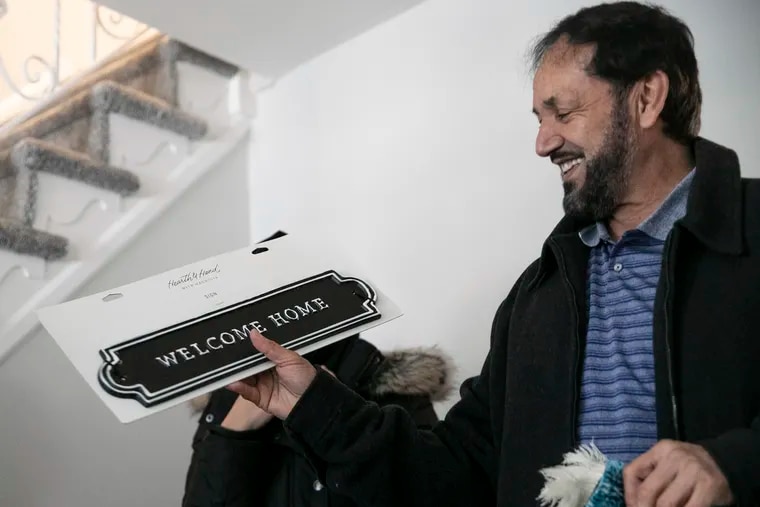 And the more she was determined to help.

On Wednesday, as the nation prepared to take a break from its annual November ritual of thanks and appreciation, she presented a newly arrived Afghan family with what they needed most: a place to live.

Ragsdale welcomed the five-member Muniri family to a townhouse she owns on Tudor Street in northeast Philadelphia, guaranteeing them safe, clean and affordable housing for next year. She assumes the risk of the cost.

“It gives me a sense that everyone is taking care of me and my family,” said Sayed Mushtaq Muniri, 56, who worked for the US government in Afghanistan for 17 years. “I’m not alone here.”

He and his wife Mahjobai, 58; daughter Saharnaz, 25; son Sayed Samiurahmani, 21; and daughter Basira, 18, arrived shortly after noon. 8 to the newly renovated three-bedroom brick house in the Holmesburg section.

Ragsdale and her husband and children were waiting to welcome them. Other friends came too. The same was done by the Afghan community members, who painted and patched to prepare the home.

The kitchen table was quickly filled with oranges, bananas, hot paratha bread and tea that came all the way from Afghanistan. People brought houseplants as gifts. And a cake with the caption “Welcome home.”

Everyone was gathered in the living room.

“A warm welcome,” Ragsdale said to the family, “to the United States, to Philadelphia, and most of all to your new home.”

She explained a bit about the meaning and tradition of Thanksgiving, how Americans on Thursday would stop, reflect, and consider the people and circumstances for which they are truly grateful.

“We certainly thank you for our blessings,” she said, “and extend them to you all.”

Then Muniri spoke to the group, his words were translated from Dari to English.

“I would like to welcome you to your house, “he said.” You are always welcome. This is our culture. You just knock on the door. “

In August, his family’s life in Afghanistan disappeared in a matter of days.

The Taliban’s takeover threw them out of their homeland as those working for the Americans faced new danger.

The air evacuation of Kabul took the family to a first-stop center in Qatar. Ten days later, they were flown to the United States and then transferred to Joint Base McGuire-Dix-Lakehurst in South Jersey, one of the eight U.S. military installations that together house about 50,000 Afghans.

They spent more than two months there in “Liberty Village,” the temporary home of 11,100 Afghans awaiting resettlement permits and approvals. In mid-November, the family was able to leave the base and have since stayed in a hotel in Philadelphia while waiting for a reliable home.

“It’s a new place, so we’re a little unfamiliar with the culture, the community,” said eldest daughter Saharnaz, who was learning English while studying American literature at Kabul University. “But we’re happy.”

The federal government may eventually reimburse the Ragsdale price for a few months’ rent. And the Muniri family might be able to pay something when they find jobs.

But if not, she said, it’s okay and the house will not cost them a dime.

“I’m just a person,” she said, insisting she did nothing special. “I have a feeling of trying to help the underdog.”

A home represents a major step forward for evacuated Afghan families. Here and around the nation, the lack of ready and affordable housing is hampering the federal government’s ability to move people away from the bases.

“The issue of accessibility is seismic,” said Margaret O’Sullivan, executive director of the Nationalities Service Center, which is working to resettle 500 Afghans in Philadelphia. “Of all the things we’re dealing with right now, housing is the most challenging.”

The Northeast has become the heart of the city’s growing, 700-member Afghan community, concentrated in the Mayfair and Oxford Circle areas.

Muniri worked at the U.S. Embassy for USAID, the major development agency, in its communications and journal section. The agency secured seats for the family aboard a packed evacuation plane. They left with only spare shoes and some clothes.

“They need our support and that we welcome them,” said Mohammad Sadiq Sadeed. who came to the Northeast two years ago after working as an interpreter for USAID, where he knew Muniri.

Sadeed asked the family to list him on government forms as their “American tie,” allowing them to resettle in Philadelphia.

Meanwhile, as summer turned to autumn, Ragsdale saw the scenes of desperate Afghans trying to enter Kabul airport and out of the country.

“I spent two weeks in August crying,” she said.

She reckoned she was not an authority on international resettlement – but perhaps on running single-family homes. She owns Ariel Capital Pennsylvania, which in turn owns properties in Philadelphia and Pittsburgh.

When she was unable to reach leaders of overwhelmed aid organizations, she began writing down the names of Afghans she saw interviewed in the newspaper or on television. It included Sadeed, who has worked endlessly to help Afghans coming to the United States

“I called him out of the blue,” Ragsdale said. “‘Maybe you think I’m a crazy woman, but I have some ideas on how to help’. ‘

They met, talked and planned.

Ragsdale does not intend to stop with one house. She is working on two more properties that can be used by second and third Afghan families. The problem, she said, is that continuing one house at a time is slow and expensive.

Her plan: Start a non-profit organization that can arrange a year of housing for at least 10 families. She intends to call it HeArt House and envisions a future connection to Afghan art.

The group would raise funds from the government, private donations, grants and from the families themselves once they work. It would engage directly with landlords – presumably attracted by the security of payment and the assurance of reliable tenants.

She needs to find a lawyer who is good at nonprofit work and would like to help.

In the meantime, she has set up a website where people can click on an Amazon Wish List link to donate household items directly to the Muniri family.

Their move-in date is December 1, their new home is within walking distance of shops, public transportation and a mosque.

“We want to start our new life as soon as possible,” Muniri said, “start a new job and new education.”